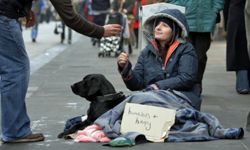 It's not just people that need your help; pets starve every day in the United States.
BananaStock/Thinkstock

Every night in the United States, children go to bed hungry. The sagging economy and high unemployment rate have created more of what the U. S. Department of Agriculture (USDA) terms "food insecure" households than the Census Bureau has seen since it began keeping data on hunger in the mid-1990s. More than half a million households with children are feeling the crunch, and the USDA estimates that one in seven people struggle to find enough to eat.

Hunger in the Untied States doesn't just affect small, rural communities, inner city neighborhoods, the indigent and the dispossessed. It has moved into the bedroom communities of Middle America where single mothers, unemployed parents, the elderly on fixed incomes and people who probably look very much like your neighbors are missing meals or eating less nutritious fare because they don't have the means to do better. 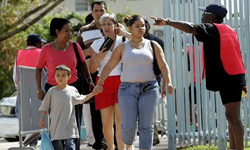 An employee of the Florida Department of Children and Families, directs applicants for food stamps.
AP Photo/Lynne Sladky

A record 41.3 million Americans were receiving supplemental nutrition assistance by the middle of 2010. The Supplemental Nutritional Assistance Program is the new name for what used to be called the food stamp aid program. High unemployment and higher food costs are the likely culprits causing the steep rise. The number of Americans receiving aid has almost doubled in the last few years with no end in sight. The stats are sobering and will probably get worse before they get better. According to the New York Times, traditionally, assistance figures begin to decline a few months after there's a drop in the unemployment rate.

The U.S. Census Bureau conducts a survey every year about food security for the U.S. Department of Agriculture. The results define hunger based on some specific but potentially confusing guidelines:

In 2008, about 16.7 million children lived in households that reported very low food security. This alarming statistic released by Feeding America, the largest hunger relief charity in the United States, is based on figures compiled for the USDA. The highest percentage occurred in single family households, many of which rely on food banks for supplemental assistance. Some of these children participate in school lunch and sometimes breakfast programs, too, making this type of assistance more important than ever.

Making a donation of money or food to a food bank is an effective way to help fight the war on hunger. If you want to give something that's really needed, consider donating baby formula, peanut butter and personal items like toothbrushes.

7: More Than Skipping a Meal

In 2008, 14.4 percent of all adults experienced hunger to one degree or another. This isn't "I forgot to eat lunch" hunger. This statistic, which equates to about 32.4 million people, is defined as hunger due to an inability to afford adequate food. Hispanics and blacks experienced hunger to the greatest degree at 26.9 and 25.7 percent of households, respectively. The Food Research and Action Center, a nonprofit agency working to eliminate hunger in the United States suggests that rates of hunger started rising as far back as the 1980s, following cuts in public welfare programs. Recently released figures for 2009 add another 4 million people to the poverty statistics, or one in seven Americans.

Hunger is a worldwide epidemic. One way to start helping, no matter how old you are, is by visiting freerice.com, an online trivia site sponsored by the United Nations World Food Programme. For every right answer, you "win" 10 grains of rice to feed someone in need. The game is free to play. Corporate sponsors provide the revenue to buy rice. 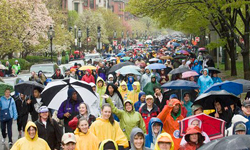 American households living below the poverty line or experiencing financial problems due to layoffs may be curtailing food funds to make fixed payments for things like rent and utilities instead. And those fixed payments come first. When times get tough, cutting back may mean eating out less and at home more. When things get really tough, eating less may be one of the few options that offers flexibility in a budget stacked with fixed costs and commitments. Imagine having to decide between making your mortgage payment this month and being able to buy food to feed your family.

Food banks turn surplus and donated food into nutritious meals for the hungry, and donations are put to good use. Feeding America, the largest hunger-relief charity in the United States can produce seven meals for every donated dollar. If you think a large portion of your charitable donation will be wasted on administrative costs, you're wrong. The money you provide to your local food bank will feed hungry seniors, children and households.

With a network of more than 200 food banks across the United States, there's a facility near you that will benefit from your donation. If you have time to volunteer, they will also be glad to refer you to a location where you can put your unique expertise to work helping the less fortunate. 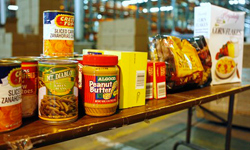 Typical food found in a food box given by Feed the Children.
AP Photo/Sue Ogrocki

Having enough of the right things to eat is important. Children who don't receive regular meals are four times more likely to have health problems. They're also more likely to have problems concentrating and experience delayed physical development. Children who go to school hungry are less engaged intellectually and less physically active. Students who participate in local school breakfast programs, however, are more alert and score better on standardized tests than children who start the day without a good meal.

Pregnant women who don't get enough to eat may have low birth weight babies. This has far-reaching implications when you consider that low birth weight babies are more likely to have physical ailments at birth, chronic illnesses later and developmental problems for years. When it comes to babies, good nutrition for mom means a healthy baby and one that has a better chance of growing into a healthy, engaged and responsible adult.

At some point during adulthood, one in two people will rely on food stamps (now called the Supplemental Nutrition Assistance Program) to get by.

2: Agencies Are Stepping Up 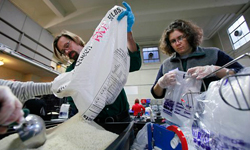 There are more than 63,000 agencies distributing more than 2.5 billion pounds of food to hungry families ever year in the United States. Although most donated food is distributed through a network of food banks, it isn't all going to soup kitchens. Senior centers, low cost day care facilities, homeless shelters, mosques, synagogues, churches and other faith-based missions as well as special organizations that provide assistance to at risk groups like battered women dispense donated food to help people in need.

Although most of the food donated to feed the hungry across the country is considered surplus, private donations are still important. When you give the gift of food, you help sustain families, nurture children and keep your community strong. Food banks need more than food and money, though. Many are staffed by volunteers, and an extra pair of hands would almost certainly be welcome. Food bank volunteers do more than deliver food and unpack boxes. These dedicated men and women are strategic planners, Web site designers and warehouse managers, too. They wear lots of different hats and bring their own areas of expertise to their volunteer efforts.

If you want to donate your time or money to fight hunger, Feeding America has an interactive website where you can enter your ZIP code to locate a food bank near you: Food Bank Locator. 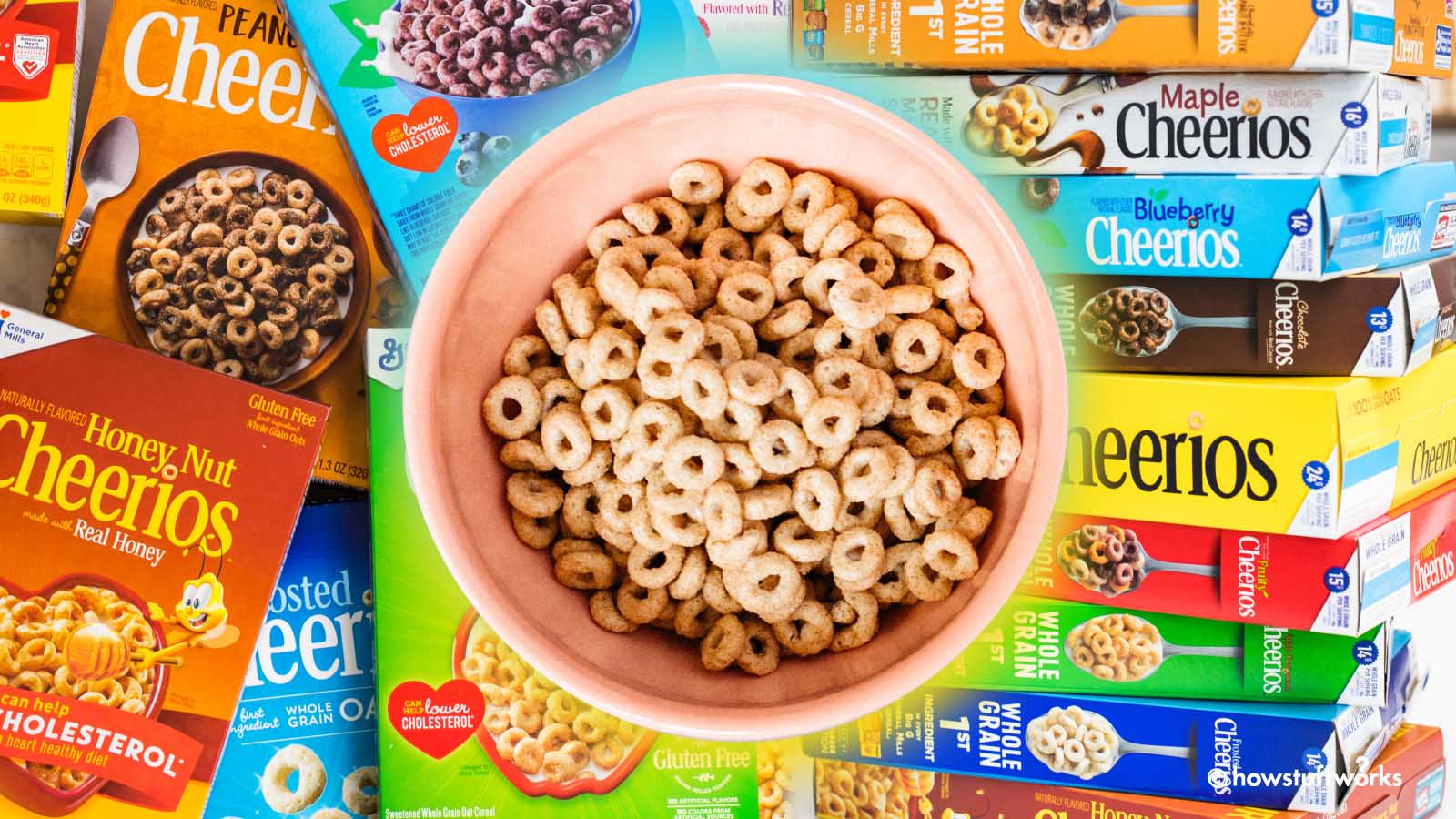 This iconic cereal has a long and fun history. For instance, its original name wasn't even Cheerios.