by William Harris
Prev NEXT
7

Salt: The Most Common Flavor or Spice 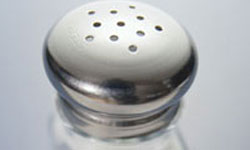 The New York City health department banned trans fats and started requiring restaurants to include calories on menus. It's setting its sights on salt limits next, according to AP.
Duncan Smith/Photodisc/Getty Images

In terms of frequency, salt -- or sodium chloride -- appeared more times on the fast-food menus we surveyed than any other ingredient. It's not always first, but it's always there, even in sweet foods (shakes and sundaes, for example) that don't seem salty at all.

Fast-food chains use salt primarily to make their meals more palatable. It's paired with pepper to season hamburgers, and it's a major ingredient in bread, ham, bacon, sausages and cheese. A single slice of American cheese, in fact, contains 250 milligrams of sodium. That makes a double cheeseburger, a popular fast-food item, especially salty. The McDonald's version of this favorite contains 1,150 milligrams (1.15 grams) of sodium [source: McDonald's USA Nutrition Facts].

Most health experts warn against eating too much salt, pointing to studies that show a link between sodium and high blood pressure. The government recommends a maximum of 6 grams of salt per day for adults, 5 grams a day for children between ages 7 and 10, and 3 grams for children between 4 and 6. Compare that recommendation to a typical family meal from KFC, which delivers a whopping 5.2 grams of salt per person [source: BBC News]!

Even if you cut down your salt intake, you have to be on the lookout for other sources of sodium. Our next ingredient is a prime example.