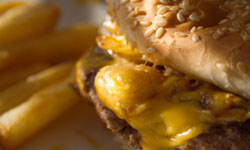 Cheese, please! Cheese-lover's pizza. Cheeseburgers. Cheese fries. Cheese curds. Cheese plates. We have a love affair with cheese, and it's not pretty.

Here's something you might not know about cheese (and why it has such a hold on some of us). A study in 1981 found traces of morphine in cow's milk. That's right -- morphine, the opiate. It's definitely in tiny amounts, but it's there. Turns out cows -- and humans -- can produce morphine in their bodies. Researchers believe it's in the milk to help a baby bond with its mother.

The other addictive ingredient in cheese is casein. Casein is a protein that, during digestion, releases substances called casomorphins, which also have an opiate effect.