by Alia Hoyt
Prev NEXT
4

Snacks and Desserts Will Ruin a Diet 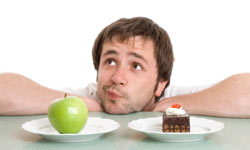 Usually it's not the snacks or occasional dessert that does a diet in, so much as it is the type and quantity of said treat. If your idea of a snack is an entire bag of chips, it would probably be best to ditch the high-fat, high-calorie indulgence in favor of something healthier and equally filling, like fruit or even a bowl of cereal.

The occasional snack is necessary to avoid dips in blood sugar, keep energy levels high and avoid binging at main meals. More often than not, dedicated dieters who constantly deprive themselves of their trademark treat, be it peanut butter or chocolate, will end up binging later on, undoing their progress. Instead, nutritionists recommend rewarding yourself once in awhile to avoid this major dieting pitfall. As long as most food choices are healthy ones and daily caloric intake is the same, healthy snacks or the occasional dessert should have little or no impact on diet success [source: MSNBC].