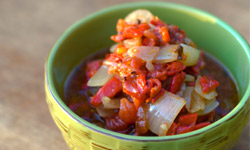 Though it literally means "sauce" in Spanish and Italian, many of us have come to think of salsa as the spicy red tomato topping that's exceeding ketchup in popularity. There's nothing wrong with that, but the world of salsa doesn't end with buckets at the end of the taco bar. Healthy and flavorful, salsas are diverse enough to accompany just about any food that doesn't come in a cereal box. What's more, they're simple enough that even the more complicated salsas can be made at home in about half an hour -- traditionalists use a mortar and pestle, but a blender or food processor works just as well. Salsas are also easy to modify to suit personal taste. Love the sweet stuff? There are mango and papaya salsas for you. Fire eater? There are literally hundreds of chili pepper varieties, all of which combine beautifully with any salsa (just make sure you don't rub your eyes after you cut them up!). Let's take a look at five outstanding recipes.

Pico de gallo is one of the easiest salsas to prepare. The base is just raw tomatoes, onions, peppers and spices, but the recipe can be modified according to your personal taste. This spicy mango pico de gallo needs no sugar for sweetening, and since it isn't as liquid as other salsas, it can be eaten either as a saucy topping, a dip or even a salad.

Combine the onion, peppers and tomatoes in a bowl with lime juice, cilantro and triple sec. To cut the mango, stand it on its end. Mangoes have a flat pit in the center, so cut down from the top on one side of the pit, then the other. Once you've separated the two sides, gently slice the mango horizontally and vertically without breaking the skin. Chunks should separate easily from the skin of a ripe mango, but you can cut any hangers-on with a small knife. Add to the pico de gallo mixture and serve immediately. 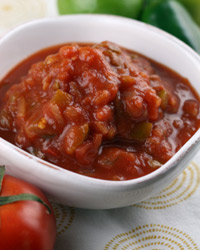 A classic red salsa appeals to everyone. This recipe has a secret ingredient.
©iStockphoto.com/Stieglitz

This recipe takes about half an hour to prepare. Toasted pumpkin seeds are the secret ingredient -- they'll give the salsa a creamy, nutty undertone.

Broil the tomatoes on a baking sheet on high until their skin begins to blacken and peel (this should take about 10 minutes). While they're broiling, toast the pumpkin seeds on the stove in a dry frying pan over medium heat. Once they plump and start to turn brown, turn off the heat and set them aside.

Remove the tomatoes from the oven and place them in a saucepan. Add the chilies, pasillas, salt, sugar, cumin and water. Bring the mixture to a boil, then simmer for about 20 minutes, stirring occasionally.

Next, add the white vinegar, cook for a few more minutes, then remove from heat and combine with the toasted pumpkin seeds in a blender or food processor. Blend until smooth, then let the mixture cool. Add the cilantro and onions and serve.

Sure, you have to pay 50 cents extra to get it on your burrito, but guacamole is both technically a salsa and technically mouth-watering. Super-secret recipes abound, but the best way to make guacamole is to use great avocados -- ripe avocados will be soft but not mushy and have significant give when you press them with your fingers. If you plan to use the avocados immediately, buy ripe ones in the grocery store, but if you have a few days, it's best to let them ripen at home in a brown paper bag, where they'll be safe from bruising.

Mix the olive oil, lemon juice, garlic, parsley and vinegar in a bowl. Set the mixture aside and mash the two avocados in a mixing bowl. A fork works well for mashing and will allow you to get as fine or coarse a consistency as you desire. Using the small-hole side of a cheese grater, grate the tomato into the avocado, and combine the other ingredients. Mix well, let stand for about 20 minutes, then serve immediately -- guacamole will brown overnight in the refrigerator. 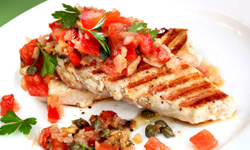 Salsa isn't just for eating with tortilla chips. Use it as a garnish for lighter meats.
©iStockphoto.com/robynmac

Italian salsa, though perhaps not as ubiquitous as its Spanish and New World counterparts, has a more robust, herbal flavor and makes an excellent dip. It can also serve as an accompaniment for fish or lighter meats, such as chicken or lamb.

Place the bread in a bowl and add the vinegar to soften it. (If you're using baguettes, you may need a little bit of water as well.) Once the bread becomes pliant, add it to a food processor with the rest of the ingredients. Blend to a coarse but uniform consistency, then season with salt and pepper.

Unlike its tomato counterpart, salsa verde gets its green color from tomatillos, a papery-husked relative of the tomato. Much of the recipe for standard salsa is the same, but the tomatillos give salsa verde a tangy, lively bite. A staple in Mexico, tomatillos were once difficult to find in the United States unless homegrown, but they're showing up more often in the produce aisle.

Place the tomatillos in a pot, add just enough water to cover them, and bring it to a boil. Reduce the heat, and let them simmer until they're tender -- a little more than five minutes. Remove tomatillos from the water, and add them with the onions, cilantro, peppers, lime juice and sugar to a food processor. Blend until the mixture is uniform, season with salt to taste, and serve chilled.