by Julia Layton
Prev NEXT
4 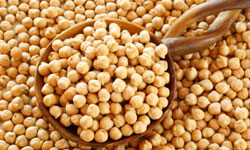 Garbanzo beans cooked with salt for seasoning would have been staple fare for Columbus and his men.
iStockphoto/Thinkstock.com

Dried legumes, namely lentils and beans, were a significant part of a sailor's diet. Columbus would have eaten plenty of lentil stew, boiled beans and chickpeas seasoned with what the ship had handy -- basically, salt.

What Christopher Columbus and his crew probably did not eat, or at least didn't eat much of, was fresh meat. That, too, would have been salted.

Consider lentil soup, hummus or baked beans (with brown sugar, since Columbus did have sugar on board).