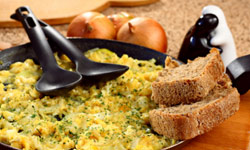 Set aside the shaker! Using onions and herbs in your scrambled eggs gives you a delicious dish without loads of sodium.
iStockphoto/Thinkstock

We know, we know. Low-sodium cooking sounds about as exciting as flossing or getting an annual physical. But, we're sorry to say, just like those other things, it's important. That's because while some sodium is necessary to regulate your bodily fluids, too much of it can cause water to build up in your blood, leading to an increase of blood volume -- a surefire way to increase your blood pressure.

Think of it another way: Salt is actually a cheater's way out. Whether you're making a gourmet feast or just whipping up some scrambled eggs, it's easy -- and usually quite satisfying to your taste testers -- to just sprinkle on some salt and let it carry the bulk of the flavor load for your dish.

True creativity in the kitchen, though, requires you to step away from the shaker and turn instead to other ingredients that can add more complex and interesting flavor to your dishes. Not only will things actually taste better -- really, they will! -- but your body will also be better for it.

Here, we offer five smart, easy and effective ways to slash the salt while turning up the taste.

5: Pull the Trigger on Salt

The art of reducing sodium in our diets comes down to two approaches: substituting more interesting, vibrant flavors for salt and just working to reduce how much sodium we consume.

We'll get to some great salt substitutes shortly, but for now, let's focus on the second course of action: simply cutting down the volume of sodium in our diet.

In the battle to keep sodium at bay, the humble spray bottle can be a great weapon. Fill it with low-sodium soy sauce (which is still quite salty tasting) and fire a spritz or two on your steak or salad. The spraying action makes sure you get even coverage, and as long as you control your trigger finger, you'll wind up with less overall sodium on the plate.

Not a fan of soy sauce? You might want to consider an interesting product called Bragg's Amino Acids, which is also made from soybeans. It's low in sodium, and users report getting a great flavor boost from the dark liquid.

Another type of ammo with which you can load the sprayer is balsamic or herbed vinegars. They'll provide a sharpness that can be just as satisfying as salt.

Did you know that 75 percent of the sodium we ingest comes from our food -- not from the saltshaker? So if you're going to take steps to leave the salt out of your recipes, also make sure you read the labels of prepared foods so you don't sabotage your good efforts.

Sometimes choosing a spice from the rack of little bottles in the local supermarket can be as confusing as trying to find a place to sit in someone's house on a episode of "Hoarding: Buried Alive." Of course, there are the old standbys like oregano and black pepper, but that's just the beginning. With a little knowledge and perseverance, you'll be amazed at how much different herbs and spices can complement and enhance various foods -- so much so that salt will seem like an unnecessary afterthought.

The broadest range of herbs and spices, including thyme, marjoram, paprika, rosemary, sage, tarragon and even ginger, complements chicken. Beef benefits from sage, thyme and, oddly, nutmeg, and a bay leaf in a pot of beef broth (low sodium, of course) works wonders. For fish, sprinkle on the dill, marjoram and dry mustard. As for veggies, consider cinnamon and cloves for carrots; corn does well with a dash of cumin; green beans take to tarragon and marjoram; and peas play well with ginger.

Using herbs and spices can help you lower a meal's sodium count, or even eliminate it completely.

If you can find them, fresh herbs will impart more flavor to your dishes than dried ones, but you'll need to use about one tablespoon for every teaspoon of dried seasoning a recipe calls for. You'll also want to consider adding herbs at the end of cooking so that they retain their brightness better.

3: Fire Up the Flavor 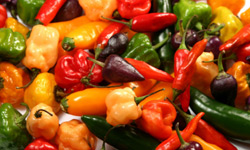 You won't miss the salt when you fire up the flavor with hot peppers. With varieties from mild to taste-bud scorching hot, you're sure to find something to please your palate.
iStockphoto/Thinkstock

In southern India, the chili pepper is traditionally believed to have supernatural powers. When hung over a doorway with a lemon, it can keep evil at bay. And, when combined with ash from the home's fireplace (as well as a few other herbs) and waved over someone's head, it can protect him or her from curses.

You may not believe that chilies have magical abilities, but we're certain of one thing they can do: make salt disappear from your table. That's because when you add the taste and tingle of fiery peppers to your food, your taste buds will be too preoccupied to notice the missing salt. If you're not accustomed to eating hot food, it's best to start slowly and gradually up the amount. Use a few red pepper flakes on your pasta or shake a dash of hot sauce on your eggs. Unlike salt, which we all tend to use too much of, a little chili goes a long way.

Chilies aren't the only way to turn up the taste temperature. You can also use wasabi (a Japanese horseradish), or harissa (a northern African chili paste). And those are just a few of the ways in which our global neighbors can contribute to the salt-reduction campaign, as we'll see next.

If you're stuck in the high-sodium neighborhood of too much salt in your food, it might just be time to move. Why not send your palate wandering the planet in search of new flavors that will have your taste buds so busy figuring out what's going on, they won't think twice about their old residence on Salt Street.

Curry powder includes spices such as turmeric, cardamom, cumin, pepper, cloves, cinnamon and nutmeg, and it's a powerful seasoning that works well in soups, salad dressings and meat dishes such as chicken curry. You can also purchase curry pastes that, when heated with a little coconut milk, make a great simmer sauce for practically anything you want to throw in.

Za'atar has been used in the Middle East for thousands of years. It's the name of a specific herb, but it also refers to a spice blend that typically contains sesame seeds, dried sumac, thyme and oregano. It goes great with lamb or can be mixed with yogurt to create a bewitching dip.

The traditional Mexican sauce called mole (moh-lay) is a dark, rich delight that can dress up everything from turkey to beef -- and here's a real bonus: It's made with chocolate! You can also think about replacing the saltshaker with some Chinese five-spice powder that zaps the need for salt with star anise, cloves, cinnamon, Szechwan pepper and fennel seeds. Try it with duck in this stir-fry recipe. Next on the menu is a way to infuse meats and veggies with bold, low-sodium flavors you're sure to love.

Instead of using salt to make up for missing flavor at the table, why not flavor your meats and vegetables beforehand by treating them to a nice bath of herbs, spices, vinegar and other yummy ingredients. A well-marinated piece of meat cooked on a grill speaks for itself without any assistance from salt.

When preparing your marinade, keep strong ingredients in mind. Think vinegar, mustard, horseradish, lemon, red wine and, believe it or not, coffee. They'll all stand up to the flames and infuse the meat (or vegetables) with lasting flavor. Sweet ingredients like orange juice, honey or crushed pineapple will cause your meat to form a nice caramelized crust when grilling.

For some low- or no-salt marinades from TLC, check out this Citrus Marinade, Moroccan Charmoula Marinade or a Mustard, Rosemary & Apple Marinade that goes great with grilled pork.

When It's OK to Smoke

Liquid smoke might sound like something made in the same labs that came up with yellow No. 5 food coloring and Polysorbate 60, but you might be surprised to know that it's actually made from smoke. To produce this super flavor booster, wet wood is heated to give off smoke, which is then either condensed directly into liquid or passed through water that picks up its flavor. It's a great way to get a grilled flavor for your food if you don't have an actual grill at your home! Use sparingly, though -- it's extremely powerful. 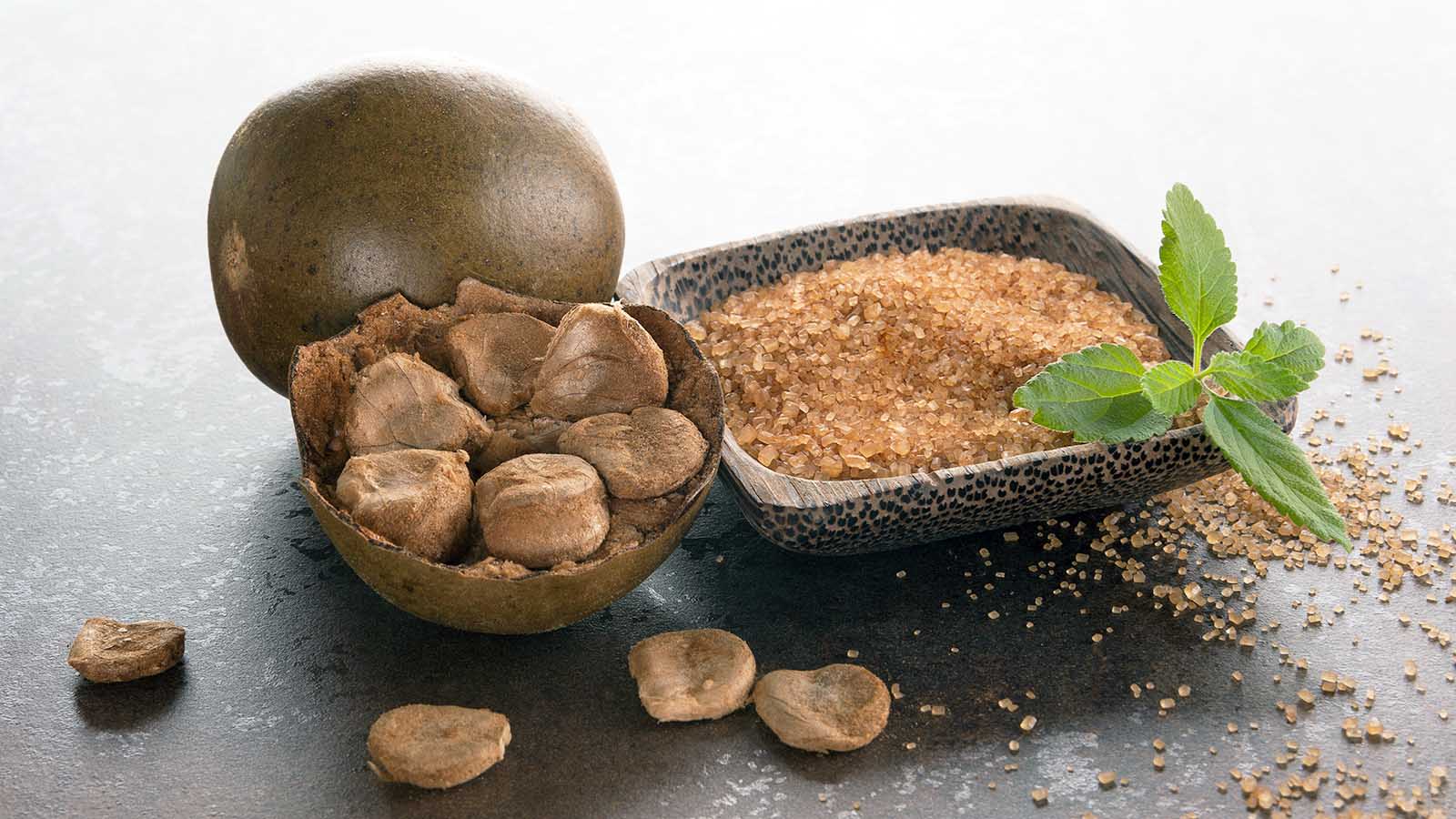 China banned export of the fruit in 2004, so you'll likely never try it fresh. But you've probably already had its extract and didn't even know it.

How Tempeh Works
Fast and Furious Hibachi-style Grilling Is Both Dinner and Theater
Did Marco Polo bring pasta from China?