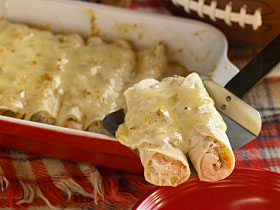 When Mexican cuisine crossed the border into states like Texas, New Mexico, Arizona and California and took up with ranchers and cowboys, it became "cheesier, chili-er and meatier," in the words of New York Times writer Joe Drape. It also acquired a name: Tex-Mex. And a future following: you and your hungry, hungry family.

Tex-Mex may be a hybrid, but that doesn't mean it's without its own distinct flavor and ingredients. How can you serve up a Tex-Mex meal in a hurry that's as true to the Tex-Mex name as it is delicious? Take a bite out of our first tip on the next page.

Stock up on Tex-Mex Spices 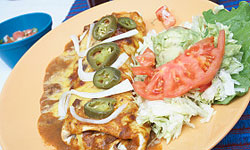 Spices have a way of giving any type of cuisine its identifying flavor, and Tex-Mex is no exception. If you want make Tex-Mex meals a regular basis, then head to the grocery store for the following spices: chili powder, paprika, black pepper, salt, cumin, cayenne pepper, onion powder, ground ginger and ground thyme.

You can add these spices to grilled meats, chili, tacos, soups, sauces and casseroles. Or, mix them all together to make your own Tex-Mex spice mix, which you can store in an airtight container, so you always have some on hand.

Stock up on Tex-Mex Ingredients

Along with spices, Tex-Mex has its own roster of ingredients, as well. Texan cowboys used to cook with ingredients from Northern Mexico. But once the railway arrived, they began mixing in more American fare like flour, lard, bacon, molasses and yellow cheese. They also started using cast-iron skillets and Dutch ovens, which allowed for more options and flexibility in cooking, and put beef on the menu.

There are endless combinations for these ingredients. But is Tex-Mex ever healthy? Click over to the next page to find out.

The Scoville Scale is the measure of a pepper's heat. It's named after chemist Walter Scoville. The higher the heat unit, the hotter the pepper. For example, a jalapeno pepper rates 3,500 to 8,000 on the Scoville scale, which is relatively low. A habanero, on the other hand, rates at 200,000 to 350,000. The "ghost pepper," one of the hottest peppers, rates at about 1,000,000 Scoville units. That's hot!

So, is Tex-Mex a nutritious cuisine? It all depends. Many Tex Mex dishes are practically drowning in cheese, which isn't that healthy. However, there are many nutritious elements of Tex-Mex cuisine. Let's take a look at some.

And of course there are the various vegetables you'll find in Tex Mex dishes -- tomatoes and peppers -- that provide Vitamins A and C.

One of Tex-Mex's signature dishes is the enchilada -- smothered in cheese and sauce. Here's how you make one:

Enchiladas can be filled with meat or beans. You can use green, red or sour cream sauce, and a variety of cheeses. To make enchiladas, you just choose your filling and season it with Tex-Mex spice. Roll it up in a tortilla with a little bit of sauce. Place in a baking dish. Spoon more sauce over the top of the dish of enchiladas. Top with cheddar or jack cheese (or a mixture of both) and bake for about 20 minutes or until cheese is melted. Serve with salsa and guacamole.

Searching for My Lost Shaker of Salt

The most popular and enduring Tex-Mex drink is, of course, the margarita. The ingredients include tequila, lime juice and Cointreau or Triple Sec. It's usually served in a glass with a salted rim. Nobody is actually sure who invented it, but we do know that in 1945 Jose Cuervo advertised its tequila with the tagline, "Margarita: It's more than a girl's name." 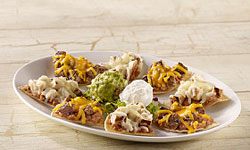 Authentic Tex-Mex nachos are a little different from the plain-Jane nachos you might get at the football game. Here's how you'll make Tex-Mex nachos:

Fry whole corn tortillas in hot oil. Drain on a paper towel. In the meantime, heat up some refried beans with a little bit of water, making the beans soft and spreadable. Grate up some cheddar cheese. Spread the beans in a thin layer on each tortilla. Top with cheese. Broil until cheese is melted and bubbly. Top with any of the following: jalapenos, seasoned ground beef, sour cream, guacamole, salsa. Use a pizza cutter to cut the tortilla into four triangles.

For more about Tex-Mex and other styles of cooking, check out the links on the next page.