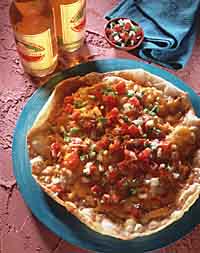 The sloping sides of a wok allow you to easily curl the edges of the tortilla as it deep-fries. If you wish, you may deep-fry the tortilla flat in a large skillet.

Check out more recipes for Southwestern