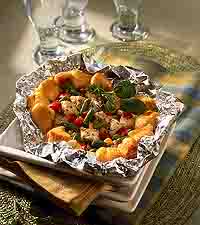 One (7-ounce) corn bread mix, prepared according to package directions, can be substituted for the refrigerated corn bread twists. Drop by rounded teaspoonfuls around edge of chicken mixture.

Check out more recipes for Chicken & Other Poultry