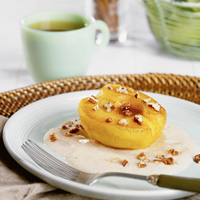 To toast the pecans, spread in a single layer on a baking sheet and toast in a preheated 350&deg;F oven for 8 to 10 minutes or until very lightly browned. Use them immediately or store them in a covered container in the refrigerator.