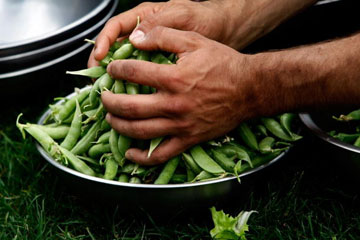 When you participate in community agriculture, your cup runneth over with snap peas. See more pictures of vegetables.
Win McNamee/Getty Images

Imagine being able to reap the benefits of owning a farm, without the backbreaking work. Each week brings a bounty of vegetables, fruits and herbs -- a box of locally grown produce that's yours for the taking. It sure beats going to the supermarket for bagged lettuce stamped with a huge carbon footprint, doesn't it?

You don't have to move to a commune to enjoy the advantages of Community Supported Agriculture (CSA). CSA is simply a group of people who pay a yearly fee to support a local farm, financially. In turn, the local farm promises them a share in the harvest in the form of a weekly box of produce, eggs, flowers, herbs and more. Sometimes a shareholder can even volunteer physical labor as well as financial support, but it's not required.

Community agriculture benefits farmers by providing financial security throughout the season, allowing them to spend more time working the land than having to deal with marketing and other money issues. Farmers also get the pleasure of meeting the people who consume their food. CSA benefits shareholders by giving them the chance to give back to their communities -- in addition to receiving all that locally grown and often organic produce. CSA members get the opportunity to sample produce they've never eaten before, and kids get to see how food gets from "farm to fork." Of course, members also take on the same risk as the farmer -- damaged crops or a dismal growing season.

CSA versus the Grocery Store

On paper, joining a CSA isn't necessarily always cheaper than shopping at the grocery store. Sometimes it is; sometimes it isn't. In the beginning of the season, when harvest is light, it's probably more expensive. But later in the season, when harvest is at its peak, you'll definitely get more for your money. CSAs do tend to be a bit more cost-effective than buying from a farmers' market each week [source: Smith].

CSA proponents point out other, non-monetary benefits. You receive food at its freshest and most nutritious. Most produce from a CSA is organic. Buying produce locally and seasonally is more environmentally sound than buying from a store. And there's just a certain satisfaction in knowing exactly where your food comes from.

Do remember, though, that a CSA probably won't provide you with all the produce necessary for your family's meals. Many don't offer fruit at all, and you may need to buy other veggies to round out your bounty each week.

If you're not familiar with eating seasonally, it can take some getting used to. You can get any kind of produce at the grocery store at any time during the year. However, eating seasonally means eating produce only when it is in season in your community. This means you might not get tomatoes until late August. And you might get a lot of lettuce in the spring, but not much in July. Many people will can or freeze extra produce so they can enjoy it in the off-season. Your CSA should provide you with a sample list of what to expect and when.

Many people enjoy being part of a CSA because of the "mystery" element. You never know exactly what you'll receive each week, which can spark some real creativity in the kitchen!

Many CSA farms also donate part of their harvest to local charities and soup kitchens. They'll give excess produce to a local shelter, and some allow members to leave part of their share behind in order to give to those in need.