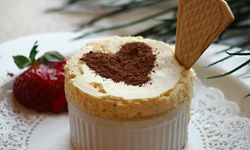 While souffle isn't on our list, it's an excellent choice for a romantic dessert. See more pictures of enlightened desserts.
©iStockphoto.com/talltrevor

Valentine's Day is a day of indulgence and decadence, of romance and flowers. Chocolate is the ambrosia of Valentine's Day gifts, and it's also the mother lode of ingredients in delectable desserts. The Aztecs referred to chocolate as the "nourishment of the Gods," and it's thought to have powers of l'amour as well. Chocolate is a well-known aphrodisiac, which is perhaps why it's found just about everywhere on the most romantic day of the year. If you wonder why chocolate makes you swoon, it's more than just the to-die-for taste. Chocolate actually releases endorphins into your body that give you a natural high. Some women reportedly get a bigger charge out of eating chocolate than kissing their mate. But don't let that stop you from preparing your sweetie a chocolatey treat this Valentine's Day.