Browse the article 10 Most Popular Desserts in America 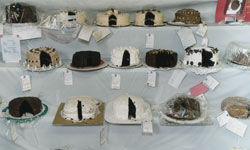 Cupcakes and Cakes for a New Era Image Gallery There's nothing like a wall of cakes to get your mouth watering. See more pictures of cupcakes and cakes.
Megan Maloy/Getty Images

Humans have always craved sweet things. Early on, it was all berries and honey, but with the introduction of refined sugar, the dessert was born. The name dessert comes from the French word "desservir" which means "to clear away" -- in this case, the dinner table. Depending on where you are in the world, you'll get a wide variety of the post-meal sweet treats. In China, it might contain red beans or dates. In Mexico, the custard like flan could be on the menu.

Read the next page to learn about America's cheesiest dessert. 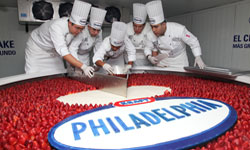 Recipes vary, but the key ingredient to this dessert is, not surprisingly, cheese. The most common cheeses in the modern version of cheesecake are cream cheese, cottage cheese, ricotta and Neufchatel. The New York version that's become so famous uses cream cheese along with eggs, cream, sugar and usually a graham cracker crust. While there are a seemingly unlimited number of variations on this classic, New York style cheesecake is served plain with no other ingredients or toppings. Other types of cheesecake are topped with or otherwise contain fruits, cookies, peanut butter and pretty much any other decadent ingredient you can think of.

People looking for a dessert fix but who wish to avoid the temptation of an entire cake need look no further than their local cupcake shop. Such an establishment shouldn't be terribly difficult to find since they've exploded in popularity in recent years, thanks to America's love affair with the individually-sized dessert.

Generally, these locales feature a smorgasbord of cupcake flavors. You can expect to find everything from traditional vanilla or chocolate to the more exotic coffee, lemon or peanut butter varieties. Jelly or cream fillings are an excellent way to add some extra oomph to your dessert -- as well as a few extra calories -- although making specialty cupcakes at home requires a bit of practice. Fortunately, many cupcake recipes can be easily prepared in your own kitchen using a simple muffin pan complete with decorative paper liners.

Cupcakes in the City

The current cupcake craze began when Sarah Jessica Parker ate one baked by New York's Magnolia Bakery on "Sex and the City." 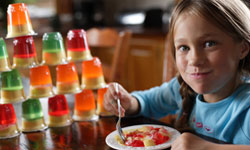 Thanks for the cow hooves and pig bones, mom!
Elie Bernager/Getty Images

There's always room for Jell-O. At least that's what the dessert's famous ad slogan says. Jell-O is actually a brand name, but it's has become synonymous with any kind of gelatin dessert. It's called "America's Most Famous Dessert" and there's an undeniably fun appeal to the jiggling. It's easy to make and there's virtually no cleanup required. All you have to do is add boiling water to the powdered mix and chill for a few hours. It's no wonder it's so popular with moms around the country.

Here's something mom probably never told you -- gelatin is a processed version of collagen, a natural protein found in the tendons, ligaments and tissues of mammals. It's made by boiling the connective tissues, bones and skins of animals. For Jell-O, it usually comes from cows and pig bones and hooves. Take that powdered gelatin, add some artificial sweetener and food coloring, and you have a very popular dessert. Chalk one up for the advertising business.

Ah, carrot cake. Not only is it equal parts creamy and delicious, it's also quite possibly the best dessert to choose when you want to fool yourself into thinking you're being healthy. Carrots are good for you, so carrot cake can't be too bad, right? Well, not so much.

Made popular in the U.S. in the mid-20th century, carrot cake is a delightful blend of sweet and spicy cake rounded out with cream cheese frosting (made from cream cheese, butter, powdered sugar and vanilla extract). Like many other desserts, carrot cake can be made using a traditional recipe or dressed up with extras like macadamia nuts, pineapple and coconut.

Of course, if fat and calories are a concern, carrot cake can be easily lightened up by making a few simple adjustments, such as reducing the amount of sugar and oil, while adding crushed pineapple to preserve moistness. Still, no matter what you do, calling carrot cake a healthy dessert will be a stretch, but it'll always be tasty.

A Carrot of a Different Color

Orange is the color most of us think of when we consider carrots, but they also come in yellow, purple, white and red varieties. 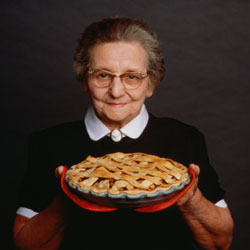 Who can refuse an apple pie from Grandma's kitchen? Nobody, that's who.
Headhunters/Getty Images

Nothing says America like baseball, hot dogs and apple pie. But apple pie wasn't born in the United States.

Apple pies or tarts date all the way back to Europe in the 14th century. The first apple pie recipes are from 1390, and they used honey in place of the seldom-used sugar. In the 1700s, the pie became pretty popular in the United Kingdom and was brought over to the new American colonies. Apple pie was regularly found in American cookbooks in the 18th century, but the famous ala mode version, topped with vanilla ice cream, didn't come into fashion until the 19th century in New York.

Because of the "red, white and blue" connotations, you can find apple pie on picnic tables all over the country every 4th of July when Americans celebrate their independence from England. The two most popular versions of the dessert are the traditional flakey crust variety and the Dutch, or crumb, apple pie. Most folks prefer it fresh and warm from the oven, but frozen apple pies are big sellers as well -- just ask Sara Lee. 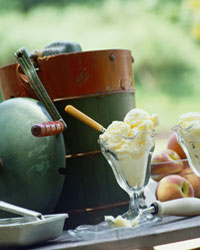 The birthplace of ice cream isn't certain, but food historians generally credit it to the Chinese and the flavored ices they enjoyed as far back as 3000 B.C. Marco Polo is believed to be the man responsible for bringing the idea to Italy, where the modern ice cream we enjoy today was born in the 17th century. The first ice cream recipe in the United States is thought to be from the 1792 cookbook "The New Art of Cookery, According to the Present Practice."

The invention of the hand-crank ice cream maker in 1843 allowed people to make it themselves, and homemade ice cream remains a popular dessert for American families today.

Many flavors have come and gone over the years, but none rocked the ice cream world like Cookies N' Cream in 1983 and Chocolate Chip Cookie Dough in 1991. Both of those flavors quickly found their way into the top 10 favorites and have been there ever since. Of course, there's plenty of other, more unique flavors for those with adventures pallets!

Served piping hot or at room temperature, made from scratch or from a mix, brownies are quite possibly one of the most versatile desserts out there, provided you enjoy a significant dose of chocolate. Some brownie connoisseurs prefer their creations to be more cake like, whereas others enjoy a fudgier, moister consistency. In general, how your brownies turnout is influenced by the amount of eggs and fat (found in butter or cooking oil) used in the recipe, as well as how long you bake them for.

Brownies can also be tailor-made to suit your taste buds. The traditional chocolate variety is a classic, enjoyable option, but some aspiring chefs prefer to include other ingredients to add some extra zing to the mix. For example, cream cheese, peanut butter or chocolate chips, coffee, white chocolate and icing are all popular add-ins. Those with truly exotic tastes might even elect to experiment with spices, salt, pepper or even dried herbs.

For cookie lovers, rarely is there a recipe more beloved than the classic chocolate chip variety. The mixture of cookie and those delicious semi-sweet chocolate morsels is indescribably good. Served fresh out of the oven or completely cooled, chocolate chip cookies are a treat that's just sweet enough without overdoing it in terms of richness. If you enjoy a little extra texture and contrast, simply serve your cookies with a scoop or two of vanilla ice cream, or try topping your creations with chocolate icing.

Many bakers indulge in raw cookie dough during the cooking process. Unfortunately, it's a prime breeding ground for food borne illness such as salmonella and E. coli, so it's best to stick to baked cookies and forgo the dough. 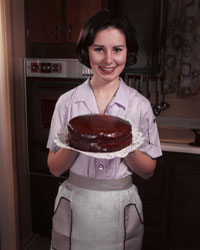 This 1960s woman knows that the way to someone's heart is through chocolate cake.
Lambert/Getty Images

It's believed that the first chocolate cake was baked in 1674 as a vehicle to enjoy chocolate, a new delicacy at the time. While it's extremely popular in the United States thanks to its inclusion at birthday parties, it's also considered the most liked cake in the entire world.

When most people hear the words German chocolate cake, two things happen -- their mouths water and they thank Germany for its contribution to the dessert cart. What many people may not know is that German chocolate cake has nothing to do with the European country. Its named comes from the inventor of the recipe, a Texan named Sam German. He concocted the famous dessert in the late 1800s, but it didn't explode in popularity until the 1950s.

The only problem with fudge is that it's nearly impossible to eat just a square or two. In the world of fudge, there's a flavor for everyone. Traditionalists can stick with the white, milk or dark chocolate versions, while nut enthusiasts might opt to choose a recipe that incorporates walnuts or macadamia nuts for a little extra crunch.

The best part about this treat is that it's shockingly easy to whip up, even for children. Plus, fudge makes an excellent gift for any occasion. If you've never had the pleasure of sampling homemade fudge, give it a try so that you'll forever understand why this rich sweet has captivated American dessert-lovers for more than 100 years.

According to legend, fudge candy is the welcome by-product of a batch of caramel gone wrong. Apparently, said caramel was not stirred adequately, causing the batter to thicken up into a more fudge like consistency. 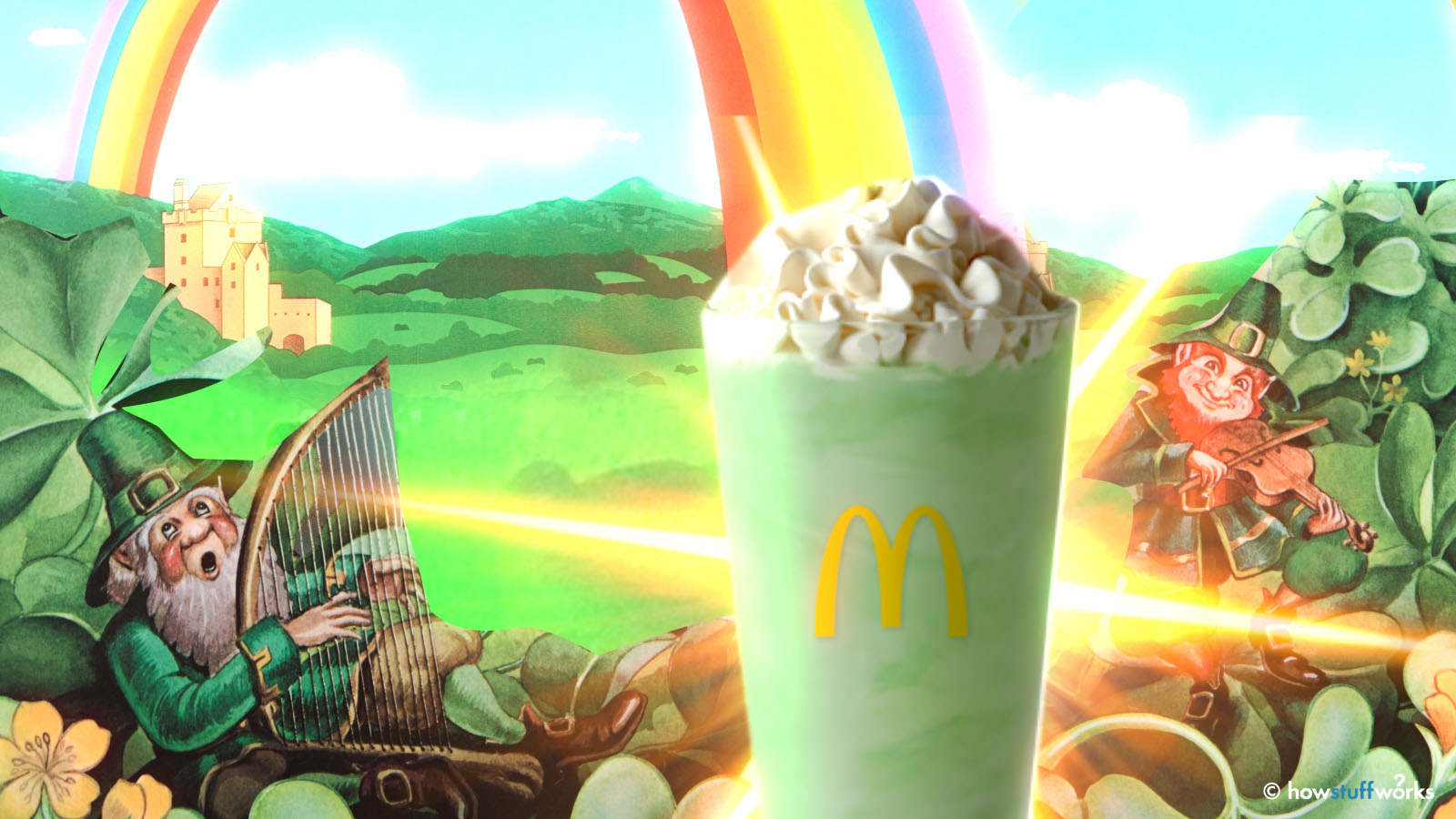 The Shamrock Shake is legendary at McDonald's and now it's celebrating 50 years. We're spilling everything to know about this fab milkshake.