Browse the article Ultimate Guide to the Abruzzo Wine Region 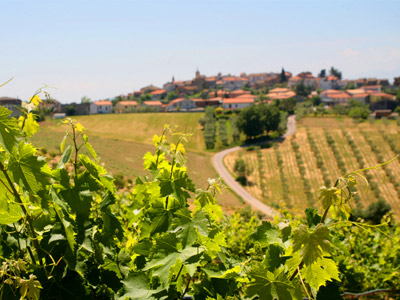 The wine you had at dinner last night could have easily started with grapes grown in a lovely vineyard like the one pictured here.­ See our collection of wine pictures.
iStockphoto/sabrina dei nobili

­On the east coast of Italy, south of the boot cuff, in the temperate reg­ion known as the mezzogiorno, is Abruzzo [source: Wine Country]. On its western side, Abruzzo contains some of Italy's tallest mountains. On its east is the shore of the Adriatic Sea. Though Abruzzo has neither the hordes of tourists nor the large population centers of other parts of Italy, its profile in the wine world has been rising steadily.

Abruzzo -- sometimes called Abruzzi -- only recen­tly made the shift from mass production to boutique-style bottle production, at the instigation of growers such as Gianni Masciarelli [source: Wine Spectator]. The region actually produces more wine than many higher-profile areas, such as Tuscany. Much Abruzzo wine is shipped to northern Italy or France, where it is blended with local varieties. But the wines that remain are drawing attention and awards from such institutions as Decanter.

Four Abruzzo wines have been certified:

­There is disagreement about the merit of the DOC and DOCG designations. One Tuscan site notes that many bottles of the local DOC are "better drinking" than the more renowned local DOCG, and another reviewer notes "there is in fact no ­ guarantee" of superiority. In an Italian grocery store, it's possible to spend a couple of Euro on a very good bottle of uncertified wine from an anonymous vineyard. If you're buying your wines from outside Italy, however, certification is a useful guide.

This article looks at the history, culture and agriculture of the Abruzzo region. We'll also examine each of Abruzzo's certified wines in more detail. Andiamo!

For centuries, the rugged mountains of Abruzzo have defined the people and cities of the region. The people of Abruzzo -- called Abruzzese -- have always lived among the natural defenses of the mountains.

Over the centuries, they resisted numerous invaders and gained a reputation for independence, pride and stubbornness [sources: Sonkin, Winebow].

Historically, the Abruzzese were tribal sheepherders, and throughout the Roman era and the Middle Ages, sheep farming continued to be the main activity of the region. The feudal era transformed the region from an area of isolated villages into an area of villages whose isolation was reinforced by stone walls and castles. Even today, the population is small. The capital, L'Aquila, is home to only 70,000 people [source: Comuni Italiani].

The Renaissance came more slowly to Abruzzo than it did to urban centers such as Florence and Siena. In the subsequent centuries, the region changed hands several times -- from Spain to Austria to the Bourbons to the Napoleonic Empire -- before Italy's 1860 unification. Though some of the coastal cities still show the influence of these different empires, the changes in power met with deep resistance in the inland mountains. They also had the effect of creating a wide income gap between farmers and landowners, which made it relatively easy for fascism to gain a footing here in the 20th century. At the end of World War II, Abruzzo -- which had actively resisted the Nazis -- suffered heavily at the hands of the retreating German army. The region didn't recover until several decades later [source: Vinitalia].

The mountain slopes of Abruzzo are important in another way: they provide ideal conditions for viticulture (the cultivation of grapes). Abruzzo's winemaking tradition may go back as far as the sixth century B.C. It was well in place by the first century B.C., when the poet Ovid -- a native of the Abruzzo city Sulmona -- sang the praises of local grapes. Some sources say that when Hannibal made his historic march over the Alps, he relieved his soldiers with Abruzzo wine from Teramo (then called Pretuzi) [source: GD Italy].

How is all that history reflected in today's Abruzzo wine? Find out on the next page.

Just as important as choosing a good Italian wine is knowing how to toast. A popular toast is "Salute!" (pronounced sah-LOO-teh), a shortened form of a longer toast that means "To your health." A less formal toast is "Cin-cin" (pronounced cheen cheen), which imitates the sound of wine glasses clinking.­

Abruzzo is full of lush foliage -- it has the most national parks and fore­sts of any Italian region -- and has been nicknamed "the lung" of Italy. Although it is temperate overall, temperatures can change dramatically between night and day because of the high altitudes.

The mountains dominate; Abruzzo is nearly two-thirds mountains. The low hills around Teramo have some of the best conditions for grapes (the name of the region's DOCG wine, Colline Teramane, means "hills of Teramo"). In fact, grapes are Abruzzo's most important crop [source: Consortium for the Protection of Abruzzo Wines].

Most of the local grapes are Montepulcianos, which come in two varieties: Rosso and Cerasuolo. The robust Rosso is the source of the Colline Teramane DOCG. The lighter Cerasuolo -- whose name means "cherry red" -- is closer to a rosé. The Cerasuolo is unusual in that the skins are typically included in the beginning stages of fermentation.

Traditional Abruzzo viticulture trained the vines up pergolas, narrow overhead arbors. One of Masciarelli's major innovations was to switch to row farming and New World pruning techniques. The change can reduce the incidence of some fungus, but it also changes the sun exposure the grapes receive [source: Winkler].

Another important part of wine production is the aging process. DOC designations mandate minimum aging times, as well as the material of the vessels in which the wines age. Abruzzo Cerasuolos are usually aged in nothing but stainless steel. Another producer confines his organic grapes to glass; the product is an overwhelming favorite that ages well and can retail for more than $200 a bottle [source: Sonkin].

For wines that age in wood, the type and age of the wood plays a major role in the wine's flavor. Most Abruzzo reds age in oak. Gianni Masciarelli, seeking to imitate the rich flavor of burgundy, imported French oak [source: Ellsworth].

How does this play out in the different certified wines of Abruzzo? Read on.

What Grows Together Goes Together

If you're not sure how to pair food and wine, a good starting point is to look at foods that grow naturally in the wine's region of origin. Staples of the local diet are often best suited to local wine. Abruzzo's diet reflects its mountain heritage. It is hearty, full of strong, spicy, rustic flavors such as pecorino, mutton and pork [source: Winebow]. Other local products include olive oil, red garlic, lentils, saffron and truffles. Traditional dishes include pasta arrabbiata (the name of the spicy red sauce translates as "angry"), scrippelle 'mbusse (crepes with pecorino cheese and chicken broth), scapece di vasto (breaded, marinated fish with saffron) and confetti, or sugared almonds [sources: Hanson, GD Italy].­

­Thanks to Abruzzo's singular focus on Montepulciano grapes, it is relatively easy to get­ a handle ­on the region's wines. Only four are certified.

Controguerra (DOC) wines can be red or white. The reds are typically dry and tannic; they're blended with small amounts of Merlot and Cabernet grapes. The whites combine Trebbiano, Passerino and occasionally Malvasia grapes for a dry, fruity flavor. Whites also come in frizzante and spumante varieties.

Montepulciano d'Abruzzo (DOC), a red, is a good option for those who want a solid Abruzzo wine, on any budget. The Quattro Mani (a mere $8 a bottle) "shows a sense of place [and] is high in quality" [source: Kinsiees]. A high-end organic Emidio Pepe (more than $200 a bottle) is "like drinking velvet" [source: Newlands]. "The fact of the matter," says reviewer Loren Sonkin, "is I have never tasted a poor Montepulciano d'Abruzzo." The intimidating-looking name is pronounced mohn-teh-pool-CHAH-no.

Wine Review calls the Montepulciano d'Abruzzo Colline Teramane (DOCG) "Abruzzo's gem...the best of the best." It is a generous red, with round notes of fresh cherry and plum. Tannin keeps it from being overwhelmingly sweet. Most Colline Teramane is aged in oak, and acquires flavors of spice and smoke. Colline Teramane wines are often described as "earthy," "masculine" or "muscular," and they're best paired with food rather than sipped on their own [source: Franz].

Keep an eye out for "riserva" or "superiore" designations, which mean you're getting 100 percent Montepulciano grapes, with no blending. You'll pay more, but it may be worth it.

If you'd like to experiment with an unclassified Abruzzese wine, try the Moscato, or the dry Angelo Bianco or Angelo Rosso. And don't forget a big wedge of pecorino. Salute!

To learn more about regional wines and related topics, visit the links on the next page.