Browse the article Ultimate Guide to the Alsace Wine Region 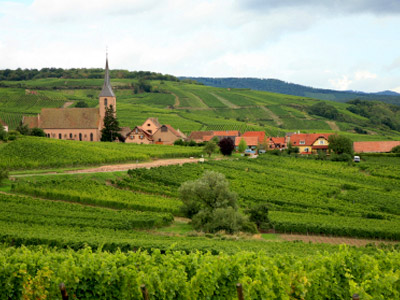 ­If you've ever entertained fantasies of bicycling through the French countryside, you may want to plan a trip to Alsace. Bike paths crisscross the vineyards and interconnect the villages. Pack up a picnic basket with some of the stell­ar local cuisine -- foie gras, sauerkraut and Muenster are regional specialties; m­ore restaurants are Michelin-ranked here than in any other region of Europe [source: Franz]. Just don't forget a good bottle of French wine. The small region of Alsace produces some of the most renowned whites in the world.

­Although the AOC designation provides that Alsatian wines should be sec, or dry, Alsace produces several sweet wines, too. The naming and designation of these wines is a continuing source of controversy [sources: Franz, Warfvinge].

One thing to be aware of as y­ou sample Alsatian wine: In many other regions, wines are named by their terroirs (the lands that produce them). In Alsace, wine nomenclature is based solely on the grapes [source: CIVA]. The Conseil Interprofessional des Vins d'Alsace, or CIVA, oversees Alsatian wine production.

This article explores the turbulent history of Alsace, how grapes have come to grow there, and the wines those grapes produce.

Fed by the Rhine river, Alsace is fertile and green. It's not surprising th­at a land so desirable should have been the source of longstanding historical conflict.

By the end of the fifth century­, the stage had been set for the conflict that would dominate Alsace for the next two millennia. St­rasbourg (the Roman city of Argentorum) was attacked and conquered by the Germanic tribe Alemanni. ("Allemand" is still French for "German.") Soon after, the Francs took over the area and began to spread Christianity throughout it. In various ways, the Franco-German dispute persisted for centuries [source: Britannica].

Following the death of Charlemagne in A.D. 842, his kingdom was divided. Alsace was among the territories split from France. In A.D. 870­, it was joined with Germanic territories­ under the rule of the Holy Roman Empire. The Middle Ages saw numerous local conflicts, as well as growing concentrations of power in the cities of Alsace [source: Warfvinge].

Religious strife soon accompanied political strife, with heavily Protestant Strasbourg in opposition to the Roman Catholic Hapsburgs. In the 1600s, Alsace found itself caught between opposing sides in the Thirty Years' War, and residents asked France for protection. By the end of the century, the region was an autonomous protectorate of France [source: Britannica].

The 1700s and 1800s saw further turmoil. Following the French Revolution, Alsace was divided into two provinces. Then, following the bloodshed of the Franco-German War (1870-1871), it passed into German power -- to widespread French resentment and the partial disenfranchisement of the Alsatians. Under the Treaty of Versailles at the end of World War I, Alsace was returned to France. When Germany conquered France in World War II, it quickly re-annexed Alsace for the duration of the Third Reich [source: Britannica].

The bitterness of World War II left lasting scars. One vineyard was so littered with unexploded ordnance that a decade passed before it could be cultivated again [source: Wernstrom].

Today, Alsace is a part of France. The local dialect is still Alsatian, a variety of German, and many cities and landmarks -- and grapes -- bear German names. But peacetime seems to produce good wines. Read on to find out how.

Residents and governments alike have had trouble answering the question. Even as the revolutionaries of France divided the province, most of the residents were speaking a German dialect. But when Germany annexed the region in the late 1800s, scores of people departed for France. Today, Alsatian schoolchildren learn both French and German. One vintner describes Alsace as "schizophrenic," but the region is learning to embrace its dual heritage [sources: Wernstrom, Britannica].­

The wine of Alsace predates even the Franco-German conflict. Grapes have been grown here since the days of the Romans [source: Warfvinge].

The massif of the Vosges mountains dominates the Alsatian horizon [source: Britannica]. It's a boon to Alsace wineries, because it shields the region from heavy precipitation. Between the mountains and the Gulf Stream, Alsace has an unusually sunny, temperate climate for its latitude [source: Bursen].

The fertile plains of Alsace are dominated by fields of cereal grains. Most of the vineyards in Alsace are on the hillsides, where much of the soil is calcareous -- high in calcium -- and relatively dry. Granite and limestone are major components [source: Bursen]. But there are also deposits of volcanic and alluvial soil, and significant variations even within small tracts of land [source: Wernstrom].

Alsatian vignerons -- wine growers -- are reluctant to plant high-yielding vines, which are believed to compromise the quality of the grapes. Instead, the region's grape production depends on planting many small vines very close together. Vignerons cultivate the vines on compact wire trellises in tightly spaced rows [source: Bursen].

The Alsatian method of viticulture depends on rigorous pruning; otherwise, an overgrown vine can block the sunlight of its neighbors, and funguses can spread easily. Most vignerons practice hedge pruning, which they time to seasonal changes. In a growing vine, nutrients collect in the tips of the shoots. Pruning removes the tips, forcing the vine to send nutrients to the grapes instead. The timing of the beginning-of-summer pruning depends on individual judgment, grape variety and location [source: Bursen].

Some vignerons also practice leaf-plucking, the strategic removal of certain leaves to give the grapes more sun. This typically comes in late July or August. In more southerly areas, leaf-plucking cause sunburn for the grapes, but at Alsace's latitude the risk is fairly low [source: Bursen].

On the next page, we'll take a look at some of Alsace's notable wines.

Alsace is one of the wine regions leading the world in practicing green viticulture. Many vintners here refrain from using pesticides and chemical weed killers. An Alsatian vintner, François Bouchet, was one of the first to adopt biodynamics, an approach to farming that regards the health of the soil as paramount. Biodynamic farming involves practices such as crop rotation, composting, natural fertilizers, cover crops and the avoidance of monoculture [sources: Biodynamic Farming and Gardening Association, Wernstrom].­

The wines of ­Alsace -- some named in French, some in German -- reflect the region's mixed history. The famous whites are both dry and fragrant. Typically, they become dryer as they age. Alsace produces only one red grape, the Pinot Noir, but only four Alsatian grapes -- Riesling, Muscat d'Alsace, Pinot Gris and Gewurztraminer -- are allowed the AOC Grand Cru designation [source: Wernstrom].

Pinot Blanc from Alsace is sometimes considered the world's best. Rounded out by Auxerrois grapes, it typically has notes of apple or baked apple and pear. The best Alsace Pinot Blancs are balanced, occasionally smoky, and acidic but not harsh [source: Franz].

Sylvaner is full-bodied, slightly bitter, strongly mineral -- some say metallic or "steely" -- and dry. It tends to be less aromatic than many other wines of Alsace. Try a Sylvaner from the south of Alsace, such as Agathe Bursin, René Muré or Pierre Frick [source: Warvfinge].

Muscat is one of the world's oldest varieties of grape. It's highly prone to mutations, which means the wines can have some variation in color. The wine is light, fresh, peppery and fruity, with notes of mint and roses. Try it with asparagus [source: Warfvinge].

Riesling tends to be a love-it-or-hate-it wine, partly because German and Austrian Rieslings are significantly sweeter than French varieties. Traditional Alsace Riesling is quite dry, however, with about the same amount of residual sugar as the Pinot Blanc [source: Wernstrom].

Pinot Gris, also known as Tokay, is a relative of the better known Pinot Grigio grapes of Italy, but Alsatians bristle at the thought of using the word Grigio on the bottle [sources: Warfvinge, Wernstrom]. Alsatian Pinot Gris has a great deal of body, with aromas of fruit, caramelized sugar and traces of the musty, mushroomy forest-undergrowth smell the French call sous-forêt [source: Warfvinge].

Gewurztraminer (spelled without the umlaut in Alsace) is the most famous wine of Alsace [source: Wernstrom]. The German "Gewurz" means "spice," and the wine reflects that. It also has floral notes and a whiff of the perfume of fruits such as mango and lychee [source: CIVA].

The sparkling AOC Crémant wines are made by the same in-bottle fermentation method used for Champagne. Crémant d'Alsace is a blend of whites including Pinot Blanc, Riesling and Chardonnay; the rare Crémant Rosé is 100 percent Pinot Noir [source: CIVA].

Some Alsatian wines -- the Vendanges Tardées, or "late vintages" -- are deliberately allowed to grow a fungus called Botyris, or "noble rot." Noble rot raises the concentration of sugars and solids in grapes, sweetening the wine. [source: CIVA].­