Browse the article Ultimate Guide to the Apulia Wine Region 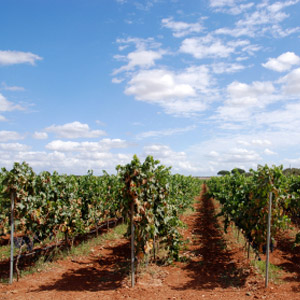 Apulian wines are a practical purchase in today’s economy - good wine at a good price. See our collection of wine pictures.­
iStockphoto/Adrian Assalve

­For a relatively unknown region of wine production, Apulia's contributions to the industry shouldn't be ignored. It's quite a valuable asset to Italy, not only for its wine production but also for all of its influences on Italian culture and history. But for now, let's focus on the wine. After all, this diverse region is one of the top 10 wine producing regions in the entire world [source: Black].

So why is it then that so few have heard of Apulian wines? A big part of this is that their major uses have been to lend body to wines from other regions, but that's all changing­. The land in Apulia is cheap and the vines have been around for a long time. These factors have br­ought attention to the area, drawing in eager winemakers [source: Black]. While the quality of wines coming out of Apulia continue to improve, the prices have stayed relatively low making the values found there some of the best in the world. In today's economy, it doesn't hurt to be on the lookout for a good deal and many Apulian wines give you just that -- good wine at a good price.

­Apulia definitely carries a stigma of quantity over quality, partly because a number of vineyards in the region ­work together to produce higher yields [source: Nicks]. More recently, however, wineries throughout the area are keepi­ng things in house, overseeing every step of the process and ensuring the quality of wines being produced with their name on the bottle.

In a country fam­ous for wines, Apulia is directly responsible for almost one fifth of the total supply. That's enough to keep them in constant competition with Sicily for the title of Italy's most productive wine region [source: Wine Country]. The region produces 25 DOC wines. DOC translates to Denomination of Controlled Origin and wines carrying a DOC designation are presumed to be of higher quality. In the grand scale of Apulia's wine production, those 25 wines represent an incredibly small portion of the region's total output. Apulia wants to be known for quality, but it has more work to do.

Grape vines had been in Apulia since earlier times, but it was Greek settlement that brought wi­ne to the region in the 8th c­entury B.C. Upon setting, they not only began producing wine but they brought a couple of their own grape varieties as well, diversifying the area [source: Di Wine Taste].

If the Greeks deserve credit for bringing wine to Apulia and many other regions, the Romans deserve credit for spreading wine around the world. When they took control of the region in the 4th century B.C, one of the first things the Romans did was build roads [source: MDM Wines]. It wasn't long before wines from Apulia spread throughout the Empire and people began to take notice. Half way through the next century, a seaport was built at Brindisi, a town on Italy's eastern shore, and the wines of Apulia spread even farther throughout the world as they made their way across the Mediterranean.

During the Middle Ages, the wine industry in Apulia took a hit. Luckily, wine was important in churches and monasteries so monks and religious leaders became experts in viticulture. Without them, wine production may have come to a screeching halt and techniques that had been perfected over the course of centuries could have been lost. Instead, wine production in Apulia persevered and in the 14th century, the export of wine from the region was thriving. So many wines were coming out of Apulia that it came to be known by many as "Europe's wine cellar" [source: Demetri]. However, the region was known for the quantity of wine it was producing rather than quality. As long as the wines were turning a profit, no one seemed to care.

Then in the 1800s, many of Italy's vineyards were devastated by phylloxera, a tiny grape-destroying insect, and Apulia stepped in to soften the blow. The huge amount of wine they were making helped fill voids throughout Italy and even France. Apulian wines were being rediscovered and for a brief period, their quality improved. Unfortunately it wouldn't last. Phylloxera eventually found its way into the region, stopping Apulia's newfound momentum [source: Di Wine Taste]. In an effort t­o bounce back from the catastrophe, new varieties of grapes were brought in and wine makers upped their production. Sadly, their desperation even led to lower quality standards and wines suffered.

In recent years, more quality wines have begun to come out of Apulia, a trend wine producers in the region hope to continue.

Grapes aren't the only crop being cultivated in Apulia. The region is also known for its numerous, and ancient, olive groves. ­

Viticulture is not the only agricultural focus of the region, although its success in the area m­ay lead some to believe it. Apulia is agriculturally rich, producing not only a huge variety of grapes, but also olive trees and wheat [source: Wine Bow].

If you're going to make wine, you need the right climate. Grapes like poor soil, warm temperatures and staying dry. Apulia happens to accommodate all three of these preferences. In fact, the soil is actually quite rocky. Some of the rocks are so big that the Italians had to make machines specifically designed to crush them [source: Franson]. Unbelievably this creates the perfect foundation for the cultivation of grapes. The rocky soil basks all day in the warmth of the sun and then releases heat at night, helping grape vines maintain an even temperature [source: Rombough]. The rocks also don't soak up moisture like rich soil does, allowing the roots of a vine to grow deep into the ground without getting too wet.

As far as sunlight is concerned, there's no shortage of it in Apulia. In fact, the region gets 1,000 more hours of sunlight each year than any other part of Italy [source: iExplore]. During the summer, temperatures soar upwards of 100 degrees Fahrenheit (38 degrees Celsius). With those temperatures, grapes don't have any problem staying warm and with all those extra hours of sunshine, they don't get very wet either, as it hardly ever rains. However, grapes do need some moisture, especially in the beginning stages of a vine's development. Therefore, some irrigation is necessary.

A number of different varieties of grapes grow in Apulia. Some of the standouts are Anglianico, Negro Amaro and Primitivo. Interestingly, the last of these has the exact same DNA as the California Zinfandel, a grape that has gained incredible popularity throughout the United States. Lately, wine growers in Apulia have made a much bigger effort to match grape varieties to their most compatible soil type. This helps produce better grapes, higher yields and eventually better wine. In the past, growers have also grafted a large number of vines onto healthy root systems that were already in place, but recently more and more vines are planted with their own roots [source: Franson].

We’ve all seen people swirling their wine around their glass before drinking it, but have you ever wondered why? Swirling wine helps aerate it and in turn releases aromas. To most wine connoisseurs, enjoying the smell of a fine wine is just as important as savoring its taste. ­

Famous Wines of the Apulia Region

Reds, roses and whites, oh my! Apulia can do it a­ll. The region is primarily known for reds and roses, but it produces a few well-known white wines as well. Some of the most famous wines in Apulia come from an area called Salice Salentino. This happens to include the first rose that was ever bottled in Italy, the Five Roses of Leone de Castris, a wine that burst onto the scene in 1943 garnering a lot of attention. For a number of generations each member of the de Castris family had five kids, hence the name, Five Roses [source: Leone de Castris].

Reds and roses carrying the name Salice Salentino are made from Negroamaro and Malvasia Nera grapes and carry DOC designations [source: Nicks]. Another wine born from the rocky soil of Apulia is Primitivo di Maduria and it is one of the most famous in the entire region. It is made entirely from Primitivo, the grape that is an exact DNA match to the California Zinfandel [source: Nicks]. Considering the success that vintners have had with the California Zinfandel, it comes as no surprise that it's identical twin Primitivo, is just as successful if not more so.

Though many of Apulia's DOC appellations focus mainly on reds and roses, there are three areas that produce white wines exclusively -- Locortondo, Martina Franca and Gravina. Locortondo is probably the most famous of the Apulian whites, made from the Verdeca grape [source: Nicks].

A wide array of wines is produced throughout the Apulia region. Although many of the best wines in Apulia have earned DOC designations, those that have earned an IGT designation shouldn't be completely ignored.