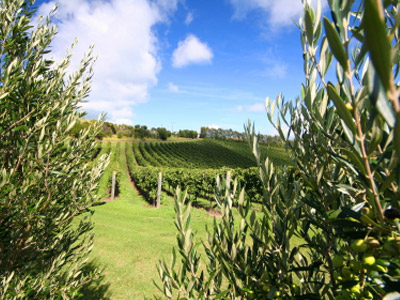 Auckland is home to one of New Zealand’s oldest wine companies. See our collection of wine pictures.
iStockphoto/Xavier MARCHANT

­Auckland is one of the most well known cities in New Zealand, but few realize just what an influence the region has on the country's wine industry. When y­ou first think about it, it seems like a less than ideal area for viticulture. It's wetter than most wine regions, the terrain is far from perfect and much of the land has been settled for commercial and housing uses. In fact, the Auckland wine region accounts for less than 5 percent of New Zealand's total area devoted to vine­yards. So how can Auckland be as important as it is in the world of New Zealand winemaking?

Despite the factors mentioned above, Auckland is home to many of the country's most respected -- and oldest -- wine companies. If you're wondering how that works since they don't grow very many grapes in Auckland, the answer is simple -- they just import the grapes from other regions [source: Cooper]. This makes the wine of Auckland less about the grapes that grow there -- since few do -- and more about the final product -- the wine. Rather than being restricted by what they couldn't make because of what they couldn't grow, Auckland's wine companies opened up local production by using non-local grapes.

­There are almost no indigenous wines from the re­gion - Auckland's mainstays are wines similar to those produced all over the world. Rather than making new varieties of wine, or growing new breeds of grapes, Auckland has mastered old recipes. It now boasts quality Chardonnays and Merlots, among others [source: Four Corners]. Perhaps this niche for the classics is a result of the heritage of their industry -- European settlers planted the grapes many years ago [source: Cooper].

Despite the unique challenges of making wine there, Auckland has found success and is becoming increasingly better known for producing high quality wine.

While the Maori were most likely the first inhabitants of the area we know as Auckland, the Europeans get credit for bringing viticulture to the area. It's widely recognized that Europeans have a long history of winemaking. So, for many, it comes as no surprise that the beginning of wine production in New Zealand happened around the time Europeans started settling the area in the early to mid 1800s [source: Auckland].

Before European settlement, New Zealand's land was typically used for raising livestock or for traditional farming. But with each new wave of Europeans, New Zealand's market for wine increased. Eventually it reached a point where it made sense for the newly relocated Europeans to dedicate part of the landscape to the production of wine rather than continue to import the expensive wines of their homelands.

The Croatians drove the foundation of the wine industry in Auckland. To this day, New Zealand's three biggest wine producers are Croatian and all are located in the Auckland region [source: Cooper]. In fact, many of the wineries of Auckland are among those considered to be the most successful and well known, partly due to their long histories in the New Zealand wine market [source: Four Corners].

Auckland, like many other areas of New Zealand, is becoming quite the wine tourist destination. When tourists visit Auckland, they are able to taste nearly every type of wine made in New Zealand since the region is known for utilizing grapes from all corners of the country.

Wine production may have gotten off to a late start in New Zealand by comparison to countries with hundreds of years of winemaking history, but it has managed to grab a share of the market pretty quickly. With New Zealand's wine industry picking up steam, and people across the world recognizing it as a power in the world of wine production, we may see Auckland's importance grow in the years to come.

Like other regions in the Southern Hemisphere, Auckland’s seasons are on the opposite schedule from regions in the Northern Hemisphere. This means that their harvests are almost exactly half a year different from their European competition. So, if your favorite bottle of French, Italian or Spanish wine is out of season, or hard to get during a certain time of year, why not try the New Zealand equivalent [source: Kapon].­

The fact that Auckland does not grow much of New Zealand's grape harvest has mainly to do with the less than ideal agricultural setting. Much of th­e area is already inhabited, and they simply can't reserve more area for vineyards. Also, the weather is wet, which can be tough on vines and grapes. But Auckland does have some climate factors working in its favor. The amazing heat of the region does foster certain types of grapes, especially those used for red wines.

One of New Zealand's greatest advantages in wine making might be its latitude. Auckland and other parts of New Zealand are the Southern Hemisphere's equivalents to many of the originating countries of those who traveled to and settled in New Zealand in the 1800s [source: Cooper]. So although New Zealand presented new challenges and unique advantages, much of what the European settlers knew about winemaking was easily applied to the similar climate they found in New Zealand.

If things had been drastically different -- perhaps if they had to study the climate to understand what types of grapes would survive, or if grape cultivation and wine production were harder and more expensive for the settlers, they might have foregone transplanting and growing grapes in favor of simply importing wine from the European countries they left behind. However, the similar seasons, climates and conditions allowed the settlers to utilize their knowledge of viticulture in their new home.

A Region of Contradictions­

Auckland is a relatively unique region. It grows a small amount of grapes but, by bringing grapes from other regions, it produces a wide array of wines. It is home to some of the oldest wine companies in New Zealand, but also to some of the newest, hippest wine tourism areas, like Waiheke Island. All this adds up to a great wine destination for anyone looking to taste a lot of New Zealand wine without having to travel throughout the entire country [source: Matthew].

As you have learned, the Auckland wine region and its districts are not necessarily known for their cutting edge or experimental wines. But they are masters of the old standards.

The Kumeu River district is known for its Chardonnay, and to give due credit, Auckland actually does grow the grapes for this wine [source: Smellie]. Perhaps Auckland Chardonnay's biggest selling point is its relatively low prices. As with many other wines from New Zealand, Auckland wines are cheaper than their European counterparts despite maintaining a similar level of quality.

Waiheke Island has made a name for itself producing red wines. Cabernet Sauvignon and Merlot are produced and consumed on the Island, which has quickly become a wine tourist's paradise. It is around three degrees hotter on the island than it is in the rest of the Auckland region, so the powerful flavors of the reds of the region are even more amplified than other Auckland reds.

Actually, the region as whole is known for the production of the Cabernet Sauvignon. Like on the island of Waiheke, this can be credited to the amazing heat of the region [source: Cooper]. The heat allows the grapes to become particularly flavorful, resulting in a more aggressive wine.

Auckland Wine is some of the oldest in New Zealand. The region set standards with its versions of old favorites.

Croatian settlers in the Auckland region started most of New Zealand’s most successful wine labels right after the end of Prohibition in the country. Although the majority still has headquarters in Auckland, they almost all own land outside the region, which is where most of their grapes are grown [source: Kiwi Wineries].­