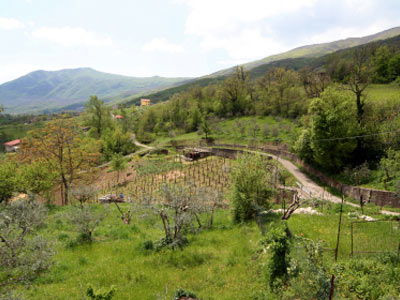 The Calabria wine region has been influenced by many different cultures. See our collection of wine pictures.­
iStockphoto/Angelafoto

­Calabria is a region that has been influenced by an incredible number of different cultures, probably in part due to its geographic location. It is the southernmost region of the Italian mainland, making up the "toe" of the Italian bo­ot. This toe is really a large peninsula that boasts shoreline on both the Tyrrhenian and Ionian Seas [source: Map of Italy]. It almost touches ­the island of Sicily, missing the connection by a mere 1.9 miles (3 km). The two land masses are currently separated by the Straight of Messina, but recent plans have been drawn up to connect them with a bridge that should be ready for travel in 2012 [source: Nation Master].

Though the Greeks are credited with introducing viticulture to the region of Calabria, the people who called the region their homeland dedicated themselves to mastering wine-making techniques. Whether they innately had a good work ethic or were excited that something could finally grow in the poor soil, no one can say for sure. Either way their hard work paid off. Unfortunately, it was ultimately destroyed when the Romans took over and ravaged the land.

­Calabria uses very little of its land to produce wine and ranks in the bottom half of Italy's regions as far as production is concerned [source: Made in Italy]. Despite having 12 DOC designations, the wine from the region has a reputation for being mediocre. Ciro is the most well known wine from Calab­ria and its history stretches back almost 3,000 years. Archeologists actually found evidence of an ancient "vinoduct" in the region. Just like an aqueduct carried water, a vinoduct carried wine, right into the people's homes [source: Wine Bow].

Calabria is still capable of making a lot of wine. It has the right soil and a variety of different climates capable of accommodating many different types of grapes. Once again, it has the potential to be called the "land of wine." If that's going to happen, more attention will have to be paid to the wine-making process and more growers will have to invest in the land.

Quick recap -- the Greeks brough­t winemaking to Calabria. The people of the region perfected the art but when the Romans took control, they destroyed entire forests in an effort to multiply their fleets. So what happened from there? Well, many years later, the Byzantines entered the picture and gave the region its present-day name.

In ancient times, Calabria had a reputation for making fine wine, but it wasn't called Calabria. It was part of a much larger region referred to as Enotria, or "the land of wine." Most of southern Italy was included in this region. Calabria would stay nestled in this large region until the 7th century, when Byzantine rule would separate it and provide the area with the name it still goes by today [source: York].

Much of the region's earlier history parallels that of its neighboring regions, Apulia and Basilicata. Greeks brought vines to the area and laid the foundation for most of the modern techniques that are still used to grow grapes today. Romans, on the other hand, built roads and chopped down trees for construction purposes as they attempted to gain control of the entire world [source: Wine Country]. The Roman Empire eventually fell. The damage they caused, however, was large scale, and Calabria felt the effects for centuries to come.

During its lifetime, Calabria has been home to dozens of cultures ranging from Arabs and Gypsies to Spaniards and Jews [source: Wine Country]. Because there have been so many different civilizations through so many different eras, wine production throughout the region has been incredibly inconsistent over the years. All of this has contributed to Calabria's present reputation for producing mediocre wine. Moreover, it doesn't look like the region will be turning that around any time soon.

The last 100 years have seen a trend that borders on an epidemic. Fed up with poor soil conditions and the inability to farm the land, people have been fleeing Calabria in droves. The current tally of this exodus sits at more than one million [source: Reiss]. Perhaps the smaller population will create more room for vineyards, but only time will tell.

For The Love of Wine

In Greek mythology, winemaking was a gift from Dionysus (also spelled Dionysos), the Greek god of wine. He gave a vine to a human named Ikarios and showed him how to make wine from it. Unfortunately for Ikarios, the shepherds he chose to share his wine with didn’t understand the feeling of being drunk and thought they had been poisoned. In retaliation, they killed Ikarios [source: Theoi]. ­

Poor soil quality isn't usually a source of excitement, especially for agricu­ltural purposes. However, in the case of vine growth, Calabria's poor soil can be a great attribute. Ideally, their roots are able to grow deep into the soil without getting soaked [source: Nueva Cocina Foods]. The soil in Calabria allows them to do just that. A number of different grape varieties thrive throughout the region, probably one of the main reasons why it was once called the land of wine.

The climate in Calabria changes with regard to location. Along the sea, temperatures are warm. The farther up in the mountains you go, it gets colder. At either end of the spectrum, problems can arise for grape vines. Too much heat isn't good, while on the other hand, frost has been known to wipe out entire crops [source: Wine Bow]. Fortunately, there's a solution. The mountains throughout Calabria provide winemakers with a number of different altitudes to choose from when planting their vineyards. If you've ever driven through the mountains, then you know that at the bottom of a snow-capped mountain, you can be completely comfortable with the windows down. But as you make your way toward the summit, you're eventually going to have to roll the windows up and mostly likely turn your heater on, too. The higher you go, the colder it gets. The growers know that if one area is too hot to plant grapes, they can simply move up -- and if it's too cold, they move down. It couldn't be simpler.

The most common grape in the region is Gaglioppo, used to make Calabria's famous Ciro wine [source: Wine Bow]. No one knows for sure whether the grape has always been in the region or if the Greeks introduced it when they arrived.

Read on to learn what other wines come from Calabria.

The Ancient Value of a Vineyard

There are records dating back to the 4th century B.C. that state that land in Calabria that had been planted with a vineyard was worth six times more than land planted in the same region with grains instead [source: Sonkin]. No wonder it came to be known as the land of wine. ­

If wines could talk, Ciro would have quite a bit to say about Calabria. It's been around for a ­long time. In fact, some people believe that it is the same as Cremissa, a wine that was used to toast the gods at the ancient Olympic Games back when they were still competing in sandals and togas [source: Sonkin]. It's quite possible that Ciro is the world's oldest wine that is still being produced. That's pretty interesting when you consider that it comes from a region that only uses a tiny fraction of its land for wine production [source: Made In Italy]. Ciro is made as a red wine, a white wine and a rose. It was the first Calabrian wine to receive a DOC designation and is hands down the most famous wine from the region.

Presently, there are 12 DOC appellations in Calabria producing a variety of different reds, whites and roses. The Greco di Bianco deserves to be mentioned. It is a white sweet wine that has quite a reputation for quality [source: Italian Made]. Unfortunately, it's hard to get a hold of, and outside of Calabria, it's almost impossible to find. The wine is made from the Greco variety of grape, which shows up in a majority of DOC wines from the region.

The Pollino, Donnici and Savuto DOCs are interesting because they are made from Gaglioppo, the same grape used to make Ciro. However, they have a different taste because of the altitude at which the grapes used to make them are grown [source: Italian Made]. It's amazing to think that by changing the altitude at which a grape is planted can both control the climate it grows in and the properties of its flavor as well.

Let’s Shake Things Up A Bit

Earthquakes are quite common in and around Calabria and some of them have been devastating in their severity. In 1908, an earthquake destroyed the town of Messina, located in Sicily just across the straight, and a number of small towns in Calabria were destroyed as well [source: Classic Encyclopedia]. ­