Browse the article Ultimate Guide to the Campania Wine Region 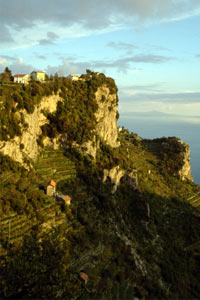 The Campania wine region includes wineries in Naples, Capri, Pompeii and Ischia -- all located along the lovely Amalfi coast. See our collection of wine pictures.
iStockphoto/Angelafoto

­Wine drinkers run the gamut, as far as drinking preferences go. Some will gulp down whatever­ bottle (or box!) is open, while others spend their lifetimes filling wine cellars with rare bottles that will never be opened. Most people fall somewhere in between, sipping a glass here or there and knowing whether they best enjoy a Cabernet or a Chardonnay. But die-hard wine connoisseurs are a breed of their own, searching the world for the best glass and the richest color, aroma and flavor. Where the wine is, they will go, and often they find themselves touring vineyards in the Campania region of Italy.

Glorious Italy. The boot. Ciao, bella! There are so many things to learn about this fascinating country. And though Italy is known for its delicious pastas and sauces, beautiful language and breathtaking archi­tecture, nothing quite tantalizes the soul like the awe-inspiring vineyards of the coastal region of Campania. Visualize Italy as a boot. Campania is located at about where the front of the ankle would be. The region includes Naples, Capri, Pompeii and Isc­hia, all situated along the Amalfi Coast [sources Italyguides.it, Cellar Tours]. Welcome to wine country.

­You want reds? They got 'em. You want whites? They have those, too. Campania's history and culture have had a significant influence on the wine that's been produced in the region for centuries. In this article, you'll read about the origins of the region and its people, agriculture and famous wine varieties. You'll find out the significance of its name and how its physical geography has affected the region's economy and made the region a center for wine production.

Go ahead and pour that glass of vino. Now let's journey back to the days of the ancient Greeks to learn about the story of Campania and its wine.

The name Campania comes from the Latin phrase "campania felix," which roughly translates as "fertile land" o­r "rich or happy land." This is understandable, considering the beauty of the landscape. Just about every ruling ancient empire spent some time in this region throughout its history. Perhaps the first to truly make their mark on the area were the ancient Greeks, whose mythology is connected to the origin of Naples. Have you heard of the Sirens? They were the bewitching, singing beauties that tried to lure Ulysses to his death with their songs. One of the Sirens was named Parthenope. She was absolutely heartbroken that Ulysses ignored her. Like any good, dramatic mythological creature, she threw herself into the rocks off the coast of Italy. The Greeks found her body and erected a monument, around which Naples formed centuries later [source: Lancaster].

From there, Campania passed through the hands of many rulers. There were the Romans, of course. Then the area was ruled and developed by the Byzantines, Normans, Spaniards, Austrians and French. Eventually, in 1870, "the boot" became the Kingdom of Italy when the unification of Italy was completed [source: travelplan.it].

Because all of these groups came through Campania at one time or another, echoes of multiple cultures helped shape the region. It's no surprise, then, that Italy contains massive amounts of archeological artifacts, paintings, sculptures and historical centers. It's the country with the most sites on the United Nations Educational, Scientific and Cultural Organization's World Heritage list [source: UNESCO].

Campania is home to a number of museums, churches, fountains, squares, castles and villas. But perhaps its most notable contribution to the world comes from the earth.

Are you hungry yet? Read on to learn about Campania's agriculture and tempting dishes.

An infamous event that happened in Campania lives on in Italy’s history -- the eruption of Mount Vesuvius in A.D. 79. Over a two-day period, the giant volcano built up steam and exploded in a massive eruption of ash, lava and poisonous gases. Thousands were killed and then perfectly preserved in their ashen graves. The most famous of the cities affected by the eruption is Pompeii, but Herculaneum, Terzigno and Oplontis also suffered massive casualties [source: Field Museum]. And a recent excavation proved that another huge eruption wiped out as many as 10,000 people in the same region before the A.D. 79 catastrophe [source: Lovett]. ­

The agriculture of Campania goes well beyond grapes. In fact, we ­can thank this region for one of the world's most popular dishes -- pizza. This delicious food had been eaten in different forms for centuries before it was invented in its modern-day style in Naples.

Long ago, people actually believed that tomatoes were poisonous, so they didn't serve them. But some were so poor that they had no choice but to risk eating tomatoes [source: Gordan]. With Naples' role in the creation of pizza, it should come as no surprise that Campania produces a variety of tomatoes and cheeses. The region also grows an abundance of additional agricultural products, including:

By far, Campania is most famous for its buffalo and goat cheeses, as well as its chestnuts. The buffalo mozzarella cheese (Mozzarella di Bufala Campana DOP) is made by hand and is famous worldwide. Salerno offers a few mozzarella festivals throughout the year if you have a passion for this tasty delight [source: Delicious Italy]. And what goes better with a glass of wine than a selection of gourmet cheese?

Have you finished that last drop of wine yet? If so, get another -- in the next section we'll learn about the famous wines of Campania.

In 2008 the Italian mozzarella business took a huge hit. Italy’s Camorra Mafia has a branch that runs the garbage service in Campania -- it controls trash removal and disposal but ignores the regulations and rules associated with it. In early 2008 Campania’s streets were filthy and littered, and the improper disposal of toxic waste was causing environmental damage. Dioxins began to turn up in buffalo dairies. Export sales of mozzarella began to tank. To prevent any further damage, area doctors have ordered blood tests to screen for dioxin levels in residents [sources: McCarthy and Phillips, Moore].­

Whether you're a red or white wine drinker, choosing a wine can be overwhelming. There are so many things t­o consider, such as dryness, fruitiness and even woodiness, when you're looking at a rainbow of choices. And if you're standing in the liquor section of a grocery store, it's not likely that you can pop open a bottle and have a taste.

Campania's Taurasi is a notable red wine, but the region is probably best known for its whites, like Fiano di Avellino and Greco di Tufo. Keep in mind that if you choose a Taurasi, you must be patient -- they must be aged for a minimum of four years.

Consider trying some of these wines of the Campania region -- many offer flavors and aromas of the local fruits and flowers. The acronyms after each name signify regional ownership and approval.

If you're enamored with Campania and want to enjoy the region's wines in the countryside that produced them, put some of these popular wine estates on your travel list:

If you make the trip to Campania, you'll get the chance to enjoy the region's wine, fruits, scrumptious local dishes, and history and culture. And be sure to make a toast -- A votre santé!

If you’ve ever smelled a freshly uncorked rotten wine, you know. If you decided to taste it anyway, you really know. Rotten wine has a nasty, mildewy taste to it. Wine sellers and producers understand that sometimes the cork malfunctions or the wine becomes contaminated somewhere in the process. Don’t grin and bear it -- just take it back or ask your server for another bottle [source: Burns]. ­