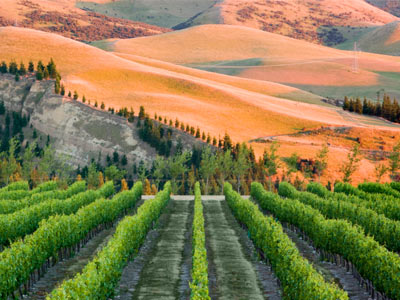 New Zealand’s Canterbury wine region is one of the world’s most picturesque wine settings. See our collection of wine pictures. ­
iStockphoto/Linda & Colin McKie

­Nestled against the southern slope of the Alps, the low, fe­rtile spread of land known as the Canterbury region is an environmental jewel resting on New Zealand's South Island. Beginning in Northland (in the north, of course) and running down to Waipara before ending in the southern city of Central Otago, this large region covers a long stretc­h of varied landscape, climates and vineyards [source: Cooper]. The terroirs of Canterbury can be broken up into 10 different regions, all with their own special flavor.

With coastal breezes and the vibrant warmth of bright days, the regions of Canterbury host all varieties of vines and grapes growing in rich, loamy coastal soils or drained and rocky former riverbeds [source: NZ Wine]. Miles of pasture and lush greenery sweep right up to the edges of pristine beaches along the East coast; this vast area has become one of the wine world's most picturesque and productive wine settings [source: New Zealand Tourism Guide]. And it's almost as if the land has been this way forever.

­When French missionaries arrived in New Zealand in the 1800s, they built churches, living quarters and towns. Wine soon followed, as vines were planted for production of the wine so crucial to the mass of the Catholic Church [source: Mission Estate Winery]. Vineyards soon flourished across the country, and today we know New Zealand as the most southern point of wine production in the world. It's also known for the variety of wines it produces, including some of the world's most appreciated Sauvignon Blanc wines [source:Gibson].

History and Culture of the Canterbury Wine Region

Originally inhabited by the Maori people, New Zealand was settled in the 1840s by Europe­ans, decades after British sea captain James Cook explored the area. Christchurch, the oldest city in New Zealand, was incorporated in 1856 [source: History Channel, Christchurch and Canterbury Tourism]. The French were the first to plant vines in the area, but vineyards did not become strongly established until the 1970s [source: Christchurch and Canterbury Tourism, Ministry of Heritage and Culture].

Vineyards began to grow densely in Canterbury, specifically around the Christchurch area and northern part of the region. Now, with the backdrop of pristine mountains and hills and the hustle and bustle of city markets, wildlife viewing and recreational activities, the South Island's prime city offers more than just a taste of wine culture on its city streets [source: Christchurch and Canterbury Tourism].

Today, it's possible to do everything from paddle back into history in traditional Maori canoes, hike on trails among breathtaking scenery and end the day with wine tasting [source: Sbrocco]. You can even venture down North Canterbury's food and wine trail to experience the best of the best in this culture-rich region [source: Scoop].

What makes this trail so unique from other wine trails that have enticed wine enthusiasts from around the world? In our next section, explore the agriculture and viticulture of the Canterbury region and find out how Christchurch's nickname, "Garden City," influences the wine that the region produces.

Small and flightless, the Kiwi is a cute, fuzzy ball of fluff, with feathers more like hair. Yet this little bird carries a nation's pride on its back, supports the country's dollar and is the well-known nickname of New Zealanders. So, what would become of the nation's identity if the now-endangered bird became extinct? This is exactly what environmentalists in New Zealand hope to prevent with Operation Nest Egg, a project for protecting and restoring the habitat of this petite icon [source: Johnston]. ­

Agriculture of the Canterbury Wine Region

There are roughly 24,700 acres (10,000 hectares) of farmland within the Canterbury region, and it is New Zealand's largest section of rich lowlands and prime farming ground [source: Statistics New Zealand, Cuisine]. And as wine was a more than $900 million industry for New Zealand in 2007, it seems appropriate that that this bountiful region would be responsible for a big chunk of that industry [source: NZ Wines, Sluys].

The region as a whole is divided into two areas -- the Waipara region in the north and the Christchurch region farther south [source: Cooper]. When researchers at Lincoln University began investigating the soil quality and possibility of establishing vineyards in the Canterbury region in 1973, they determined that Riesling and Chardonnay could be top producers [source: Cuisine]. Even the trickier Pinot Noir, known for its earthy, yet light and fruity aroma and taste, was said to perform well in the region, finding its roots among the well-drained soils [source: Isle].

Cultivated by years of oceanic settling and change, soils in Canterbury are sandstone, silt and limestone-heavy varieties. All of these soil types work well with favorable sun and moderately cool climate to produce the wide range of grapes grown here [source: Holding, Canterbury Winegrowers Association].

Canterbury isn't only about wine. Split with rivers, the Canterbury region is also known for its salmon fishing and sheep-raising communities [source: Encyclopaedia Britannica, Te Ara].

If you're ready to sample some of Canterbury's famous wines, move onto the next section to learn about the region's finest.

For vintners, the main source of classification is grape type, of course. But when it comes to distinguishing a label or a brand, soil can play a part, too. Take for instance, the Gimblett Gravels mark. Found along the eastern side of North Island, Gimblett Gravels separate themselves from other terroirs using the land on which they stand: a sandy, gravelly riverbed washed open in the 1860s [source: Gimblett Gravels]. Vines in this area are exposed to warmer days and nights throughout the growing season, which lends to a distinctly different blend of flavors and bite in the red wines of this conglomerate—a bite that may soon beat out reds from other more prominent areas [source: McCoy]. ­

Looking for a great wine and an unbeatable price? It seems as if New Zealand might be the next big thing, but even with its growing popularity, it hasn't always been so. Several wines were pulled in the 1980s, and a serious rebuilding effort was mounted in the 1990s, under which the country's production once again flourished [source: Robinson].

Today, Sauvignon Blanc is quickly becoming "the" wine of New Zealand, with a supremely recognizable "crisp, grassy" flavor [source: Canterbury Winegrowers Association]. But everything from Riesling to Pinot Noir and Merlot have worked their way into the hearts and palates of people worldwide, and should you want Chardonnay from the southernmost wineries of the world, you'll be able to find it [source: NZ Wine].

Which bottles and years are getting the rave reviews? Try one of these gems from Canterbury:

South of the border and south of pretty much everything, these wines have their own distinct flavor of sun and style packed into every shippable drop. Now you can get out there and sample some for yourself.

Be sure to check out the next page for more helpful links.

In recent years, with findings of mold damage to wine, the age-old cork wine stopper has been, well, stopped. With the support of vintners who want less spoilage of their products, screw tops have steadily gained their place among select bottlers until the industry-wide shift saw a mix of both cork and screw tops. Despite the cork preferences of most people, New Zealand has become the industry leader in screw tops with some 90 percent of its bottles being capped this way [source: Goode, Wine Spectator]. ­