Champagne Science: There's a Lot Going on in That Bottle of Bubbly

by Laurie L. Dove Apr 4, 2017
The process of creating sparkling wine is intricate, scientific and has been refined over centuries. DNY59/Getty Images

Over the tantalizing clink of crystal Champagne flutes, a voice rises and a dinner party begins to hush. Forks lay silent and conversations pause mid-thought as a raised glass and a heartfelt toast interrupt the evening, if only for a congratulatory moment.

While a glass of the bubbly usually signals celebration, hosts Anney Reese and Lauren Vogelbaum discover in this FoodStuff podcast episode that Champagne has caused plenty of conflict throughout its tasty — and surprisingly hard-won — history.

Not All That Sparkles ...

Don't let the effervescence fool you. Not all sparkling wine is Champagne. Authentic Champagne is named for the French region in which the sparkling wine is produced using a special fermentation method that creates seemingly endless carbonation. European law sets this specialized wine-growing region apart; only wines from the viticulturally rich area about 100 miles (160 kilometers) east of Paris bear the word "Champagne" on their labels.

There are seven types of grapes used, in varying quantities, to produce Champagne. These major and minor varieties are categorized as such according to the quantity in which they are used, and each different type of grape imparts a different flavor on the wine:

• Chardonnay (major): This grape adds acidity and a light flavor profile to a Champagne blend

• Pinot noir (major): A complex-flavored grape that pulls in the mineral quality of the soil

• Pinot Meunier (major): Aromatic and fruity, adding a stable and full-bodied flavor • Pinot blanc (major): Known for its honeyed and floral aroma, this is a large and full grape • Petit Meslier (minor): A small grape with a relatively high acidity, used to balance the ripeness that overcomes other varieties during hot years • Fromenteau (minor): Known for its body, richness and mature flavors • Arbanne (minor): The vines producing this fruit have low yields, but add a rustic profile Twice-Bubbled, Once Sipped

For a bottle of sparkling wine to be labeled Champagne, it takes more than specific grapes grown in a specific region of France. It also requires a particular method of fermentation, known as the méthode champenoise, that also must be completed in the Champagne region. Try it anywhere else, and the process is relegated to méthode classical.

Both methods begin with making a base blend of wine, then adding sugar and yeast. After fermentation occurs, the concoction is then bottled for a second round of fermentation. After this second round of fermentation, the "lees," or residual yeast, is removed from the bottle and sugar is added. How much sugar varies according to whether the end product will be classified as "brut," with less than 0.4 ounces (12 grams) of sugar per liter, or "doux" with more than 1.76 ounces (50 grams) of sugar per liter. The bottle is then corked and regular rounds of "riddling" take place, during which the bottle is placed upside down to collect sediment that is emptied before the lot is sold.

By this time, the bottles of wine are fully carbonated, full of those iconic sparkly bubbles. As the yeast eats the sugar during the fermentation process, it releases carbon dioxide. This carbon dioxide stays cooped up in the bottle, pressurizing the container and carbonating the wine. An average wine bottle contains about three-quarters of a liter and 0.26 ounces (7.5 grams) of carbon dioxide. When the cork is removed — with a pop! — about 1.3 gallons (5 liters) of carbon dioxide gas comes out, too. It's enough to inflate about 62 bicycle tires.

What to do with that Champagne once the top's popped and the bottle's open? Check out this BrainStuff video for more on that:

Now That's Interesting
Article 275 of the Treaty of Versailles, signed in 1919 at the end of World War I, mandated that only sparkling wine from Champagne, France, could be labeled "Champagne." But though the United States signed the treaty, the U.S. Senate never ratified it, and the U.S. wine industry continued to use the term. It wasn't until 2006 that the U.S. and EU agreed that American winemakers couldn't label their wines "Champagne" — unless they'd been doing so prior to March 10, 2006, in which case they'd have to specify a state of origin: California Champagne, for instance. 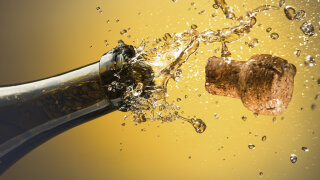 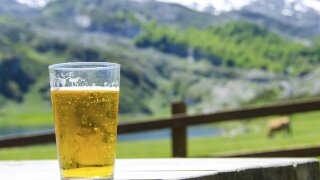 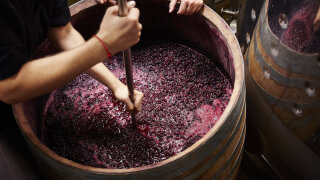 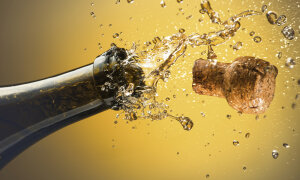 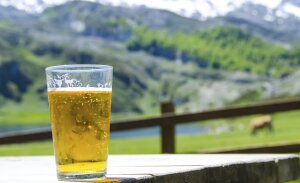