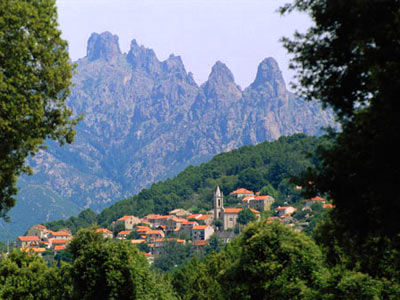 Viticulture plays a leading role in the economy of many Corsican villages. In fact, viticulture contributes about one-third of the value of the entire island's agrarian output. See our collection of wine pictures.
Sami Sarkis/Photodisc/Getty Images

­The mountainsides of Corsica rumble with the echoes of a long and tortured history. This island in the midd­le of the Mediterranean Sea, abo­ut 50 miles (80 km) west of the coast of Tuscany and 100 miles (161 km) south of the French Riviera contains some of Europe's most beautiful scenery. No larger than Puerto Rico, the island boasts a varied terrain that brings to mind the Alpine slopes, the semi-arid plains of the North African Maghreb, and the pastoral valleys of northern Italy. Many invasions by European powers over the centuries have left their mark on Corsica's landscape and way of life. Every part of the island has its own local dialect and distinct traditions. These are some of Corsica's most important resources.

­Yet Corsica has been experiencing a renaissance in the early 21st century, after a period of economic and cultural decline following World War II. Key to the island's return to prosperity is a new commitment to old practices of small-­scale agriculture and artisanal, gourmet culinary production. Viticulture plays a leading role in Corsica's economy, contributing about one-third of the value of the island's agrarian output [source: AGRESTE Corse]!

Some wines of Corsica are among the finest in Europe, but only a small amount of wine is produced for export. Three native vines comprise the basis for most of Corsica's fine wines. The Sciacarello, found only in Corsica, and the Nielluccio (similar to the Sangiovese grape found in Italy), separately or together, produce reds and roses; the Vermentino is the basis of whites. These robust, rustic wines bear the imprint of the local soil and climate conditions.

What historical and cultural factors have influenced this island's wine production? Read on for a whirlwind tour of the history and culture of what the French call "L'Île de Beauté."

Neolithic megaliths reveal the presence of human ­ civilization on Corsica 5,000 years ago, but most likely people were living on the island long before that. Many of the ancient civilizations of the Mediterranean came to occupy the island, such as Iberians, Ligurians and Phoenicians [source: Corsica's Inclement History]. The Greeks settled in Aléria on the eastern coast while about the sixth century B.C., Rome took control of the island from Carthage in the first Punic War. Some foreign occupiers, such as the Etruscans, developed agriculture, including vineyards along the coasts. Others, such as the Moors, brought destruction and left these fields to wither [source: Atchley].

The Italian city-states of Pisa and Genoa spent centuries vying for control of Corsica. In the 18th century, General Pascal Paoli's nationalist movement succeeded -- although briefly -- in establishing a semi-autonomous state, based in the middle of the island at Corte. By then, the Genoese were losing their grip on Corsica; in 1768, they ceded it to France, who conquered the island the following year. Corsica has been governed as part of the French state since then, but invasions continued. German and Italian forces took the island during the Second World War, but the resistance held strong until the Allies landed here in 1943 [source: Atchley].

The result of this tumultuous history is an island society more worldly than French, fiercely interested in preserving its cultural heritage. French is the official language, but most of the population also speaks Corsu, a dialect influenced by the languages spoken in Tuscany and Genoa.

The Corsican people have developed many culinary specialties. The island's black boars are the source of a variety of delicious charcuterie (cooked, salted, cured, smoked or otherwise processed meat foods) products [source: A Generous Table]. For centuries, Corsicans have made bread from chestnut flour, a tradition that has recently been rediscovered [source: Lobrano]. Brocciu, the so-called "poor man's cheese," is similar in texture to ricotta but made from the whey left behind in sheep's or goat's milk [source: Le Bail]. Olive oil, a key ingredient in Mediterranean cuisine, is a delicacy on Corsica.

The perfect italian wine takes the perfect grapes -- which in turn take the perfect land conditions. Read on to learn about the agriculture of the Corsican wine region.

A certain variety of sweet onions, originally grown in the Cap Corse peninsula of Corsica, spread to the Pacific Northwest of North America. This variety is known as the Walla Walla onion [source: Lobrano].­

Wine production is an ancient t­radition in Corsica, dating back more than 2,000 years, but the practice has waxed and waned. Foreign invasions actually affected where Corsicans raised their grapes. To avoid invaders, many Corsicans took to the mountains, abandoning sunny coastal valleys with ideal growing conditions [source: Berberoglu].

Throughout its history, Corsica's Mediterranean climate has favored the raising of the grape. The island gets considerably more sunshine than continental France does, and a lot less rain during the summer months. Corsican vines are grown in various types of soil. The Nielluccio vine grows in chalky limestone in the Patrimonio area to the north, while the western half of the island is dominated by granite hills in which the native Sciacarello vine thrives, even at high elevations [source: To Know More About Wines].

The island's agriculture prospered in the early 20th century; it became one of Europe's leaders in production of wine and olive oil. After World War II, however, the island's cupboard went nearly bare, due to a population exodus, overseas competition and other factors [source: Lobrano]. Following the defeat of French colonialism in the African colony of Algeria, a number of repatriated Algerian settlers -- called pieds noirs -- immigrated to Corsica and set up large, mechanized vineyards on the plains, as well as groves of clementines. These efforts revived the island's agriculture, but at a cost. The pieds noirs grew French rather than native grapes, producing and exporting vast quantities of cheap wine. Travel writer Paul Theroux characterized the wine as "little more than red ink" [source: Theroux]. Sales plummeted, and in time, the government stepped in to regulate the industry, imposing the French quality-control system of appellation d'origine contrôlée (AOC; "controlled term of origin") [source: Berberoglu].

Traditionalists resist the spread of French and "international" vines such as Chardonnay or Cabernet Sauvignon in the wine region of Corsica, preferring to revive the native species most suited to the growing conditions and local cuisine. Presently, Corsica is experiencing a revival of traditional agriculture and gourmet products such as wine, cheese, olive oil, honey and charcuterie.

Agriculture, anyone? The idea of agriculture-based tourism (agriturismo) is making headway on Corsica. Tourist packages highlighting the local cuisine and areas where its ingredients are produced, it is hoped, can augment the island’s economy while preserving the quality of life and increasing demand for Corsica’s distinctive goods [source: Lobrano].­

Wine is Corsica's largest and most important export. Following the ­overproduction of the pieds noirs in the 1960s, the island undertook a massive uprooting campaign, returning the vineyards to their previous capacity of roughly 17,297 acres (7,000 hectares) [source: CIV Corse]. From then on, the emphasis has been solely on quality, as well as on the modernization of both viticulture and marketing techniques.

These efforts have been recognized by the awarding of nine AOC designations. A full 70 percent of Corsica's AOC wines are marketed locally, and mostly consumed during the intense summer tourist season. The remaining 30 percent are exported [source: CIV Corse].

The great majority of Corsica's best wines are made from the three distinctive Corsican grape varieties:

These grapes transmit the flavor of their illustrious lineage.

The mayor of Patrimonio, Guy Maestracci, is an amateur guitarist and winemaker. In addition to helping start a local festival called Patrimonio Guitar Nights, Maestracci is also known for his Muscat Domaine de Pastricciola, which is locally produced and has won awards [source: Lobrano].­