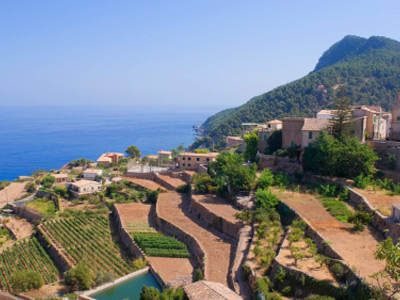 ­The Emporda wine region is tucked into the very northeastern corner of Spain. If you love the surrealist artist Salvador Dali, you might have heard of it. But if you're simply a lover of wine, Emporda may not have had a chance to capture your attention just yet. Its wine production dropped drastically after battling phylloxera. However, E­mporda is battling back for a wine­making renaissance, using small cooperative bodegas to produce an annual 1,700,000 gallons (69,827 hl) on just 5,000 acres (2,000 hectares) [source: Counsel Regulador].

With winemaking exports tracing back more than 2,000 years, you might expect the Emporda wine region would have a long and substantive history of viticulture and winemaking behind it. However, phylloxera, a grape louse, infiltrated local crops in the same way it took over much of France. While France made quite the rebound, regions like Emporda weren't so lucky. Acres of terraces and vineyards were left to wither and still remain empty today.

­Today, the Spanish wine region boasts several Designation of Origin, or DO, wines, a mark of quality. It has a diverse climate and soils that are perfect for grape harvests -- the region has only a few frosts a year. The diverse soils and landscapes (from marshes and valleys to c­oves and mountains) allow the region to produce all kinds of grapes and wines [source: Emporda Online]. Though red dominates their wine production by more than half, the region also produces whites, rosés -- even sparkling and semi sparkling wines.

So grab a glass, sit back, and start the Emporda's wine renaissance by learning the region's original winemaking history on the next page.

The Emporda wine region ha­s a long history of viticulture that spread throughout the land, far beyond what would now be Spain's borders.

Winemaking hit Emporda at least 2,000 years ago. Wine was known in the area as early as the mid-500s B.C., though concrete evidence of actual viticulture and winemaking date back to about 100 B.C. [source: Counsel Regulador]. By that time, wines were already being sold in markets outside of what is now Emporda, so it's safe to say the actual introduction by the Greeks was sometime in between 500 B.C. and 100 B.C.

Similar to many other winemaking regions, Emporda's winemaking relied on monks and monasteries during the Middle Ages. Then in the 18th and 19th centuries when phylloxera, a vine louse, appeared in France, Emporda like many other unaffected regions in Spain stepped up its wine production efforts to compensate for the void phylloxera was causing elsewhere. At that time, the Emporda wine region was covered in terraces and vineyards as they worked to make up for the dramatic losses in France's wine production [source: Apstein].

Unfortunately, Emporda was not immune to phylloxera. Like many other winemaking regions that prospered during their competition's demise, Emporda's crops were eventually infected and devastated by phylloxera when it made its way into Spain. Emporda's reign as a winemaking powerhouse was over. Coupled with two world wars, Emporda could not recover the massive amounts of land that all of the active vineyards had once occupied [source: Counsel Regulador].

Today, cooperative bodegas have become popular within the Emporda wine region. Though the wineries still are not taking anywhere near the amount of land they once were, the winemaking industry within the region is beginning to rebuild. Concerted efforts toward quality wine have led Emporda to have a renaissance of sorts in the wine market.

Agriculture is a crucial aspect to growing the perfect grape. Read on to discover the agriculture of the Emporda wine region.

You may not equate Spain with traditional European art, but the area is filled with sweeping, impressive Gothic buildings and beautiful Romanesque art [source: Counsel Regulador].­ It's the perfect place to mix flamenco and flying buttresses. ­

The agriculture and climate of a region is crucial for producing proper grapes. The Emporda wine region has many characteristics that help the area's viticulture. Located in northeastern Spain, Emporda is bordered by both the Pyrenees and the Mediterranean Sea. The Emporda DO, or Designation of Origin, is a classification that generally signifies high quality resulting from specific production areas. Emporda's DO winemaking areas can actually be divided into two smaller regions: Alt Emporda, the northern half with 35 municipalities; and Baix Emporda, the southern half with 13 municipalities [source: Counsel Regulador].

The Emporda wine region is filled with rivers, marshes, coves and mountains [source: Emporda Online]. Much of Emporda's soil is sandy and acidic, which helps produce better grapes. The roots of grapes must be allowed to drain fully, and the sandy soil, which doesn't hold much water, actually improves the vines. In the plains, the soils are often highly fertile, consisting of sediment runoff from the water. In the mountains, the soil typically consists of slate and granite.

The Emporda wine region has hot summers with mild winters that only occasionally see frost. And during those hot summers, the breezes of the sea often assist in moderating the sweltering heat. In addition, the climate of Emporda is also affected by the Tramontane, a northerly wind (see sidebar for more information on the Tramontane).

With a variety of soils and landscapes, the Emporda wine region can accommodate a variety of grapes. To discover the famous wines these grapes produce, read on.

Think you have some windy gusts? You might think twice if you come across the Tramontane, a very strong wind that blows in from the north. This wind is a speed demon that can gust to more than 75 mph (120 kph)! Thankfully, this tough, cool wind is actually advantageous for the region, as it assists in the health of the grape vines [source: Counsel Regulador]. ­

Though the Emporda wine region may not be producing wine anywhere near its heyday of the 18th and 19th centuries, the region produces many white, rosé, red and sparkling wines, and among them are a number of DO (Designation of Origin) wines.

The reds of the region include:

The red wines of the Emporda wine region are full-bodied and complex. They can have a hint of fruit or spice, and are often aged for some time. Reds make up the vast majority of Emporda's wine production, accounting for about 60 percent of the region's total wine output [source: Counsel Regulador].

Meanwhile, the whites include:

The white wines are generally light, crisp and full of flavor. They often use native grapes to enhance these wines. Whites take up just less than a fifth of total production, and rosé wines fall just below them, coming in at 17 percent of total production [source: Counsel Regulador].

You're now poised to enjoy this region's winemaking renaissance. If you can't head to Emporda anytime soon, the United States is one of eight countries that take in most of the region's exports.

For more wine-related information, check out the links on the following page.

Wine is not the only draw to Emporda. The region is also home to the Dali Theatre-Museum, "the largest surrealistic object in the world" [source: Salvador Dali Foundation]. Dali, probably the world's most famous surrealist artist, created his own museum at the ruins of the Municipal Theatre, which was originally destroyed during the Spanish Civil War. The area also holds the Dali Jewels, which include stones, jewels, drawings and paintings created by Dali. ­