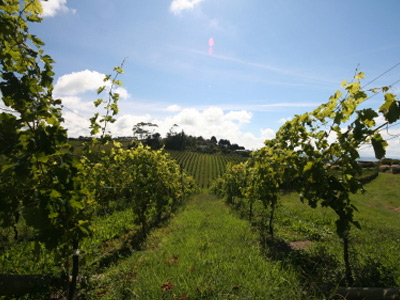 The Gisborne wine region is also known as the “Chardonnay capital of New Zealand.” See our collection of win­e pictures.
iStockphoto/Xavier MARCHANT

­For those in the Northern Hemisphere, New Zealand is about as far away as far away gets. The eastern part of the country is literally the first place where the sun shines at daybreak­, thanks to its proximity to the International Date Line.

Being home to the southernmost winemaking region on Earth, one ponders whether New Zealand really is an ideal place for growing grapes. However, when the country first started exporting wine in the 1970s, New Zealand's Gewurztraminer was the first wine to gain connoisseurs' recognition. Since then, New Zealand has become synonymous with the world's best Sauvignon Blanc [source: Stevenson].

­The 10 wine regions in New Zealand produced 147 million liters of wine in 2007, of which more than half was exported. Sauvignon Blanc accounts for about 70 percent of the nation's total e­xported wine. But New Zealand wineries have more to offer than just Sauvignon Blanc. Its Chardonnay and Pinot Noir are also lauded. In fact, the third largest winemaking region, Gisborne, has dubbed itself the Chardonnay capital of New Zealand [source: On the Vine].

Located on the northeast coast of New Zealand's North Island, with a population of about 44,000, the Gisborne wine region stretches north and west from Gisborne City, encompassing three river valleys. Gisborne is also known as Poverty Bay. The name does a serious injustice to the area since its location is in one of New Zealand's most fertile and temperate horticultural plains [source: Statistics New Zealand].

Gisborne lies on the Pacific Coast in the Eastland area, which enjoys a unique history and culture unlike anywhere else in New Zealand. Read on to learn about it.

The first inhabitants, the Maoris, came from Polynesia in the 1300s. They landed in the Gisborne area, and called the region Tairawhiti, which means "the coast upon which the sun shines across the water." [source: Gisborne Winegrowers].

Gisborne also was the place where the first Europeans came. First spotted by a Dutch sea captain in 1642, the area was named for the Dutch Province of Zeeland. The first European to land on New Zealand was British navigator Captain James Cook. Some people say that his 1769 encounter with the Maoris resulted in the moniker Poverty Bay [source: New Book of Knowledge].

By the late 18th century, whaling and sealing stations operated along the coast, while inland, settlers raised sheep and cattle. Colonists settled in Wellington, the country's present-day capital, between 1796 and 1862. Trading began in timber and fibers. Missionaries arrived on the scene in 1814.

In 1840, New Zealand was claimed as a British colony, and a treaty was concluded that guaranteed Maori ownership of their lands. The British Parliament made New Zealand a self-governing colony in 1853.

The discovery of gold brought new immigrants to New Zealand in the mid-1800s, and the advent of refrigerated cargo shipping enabled the export of meat and dairy products. In 1907, New Zealand became a dominion in the British Empire. It is now a self-governing democracy and a member state in the Commonwealth of Nations [source: New Book of Knowledge].

About 45 percent of the Gisborne district's population is of Maori descent, the largest anywhere in New Zealand. While most of the Maori population now live in towns or cities, traditional Maori villages still dot the coast in Eastland. It's not uncommon to hear the Maori language spoken in Gisborne. Historic Maori meetinghouses and distinctive wooden figurines are scattered throughout Eastland [source: Statistics New Zealand].

Read on to find out more about agriculture and viticulture in the Gisborne wine region.

Maori locals are called “Tangata Whenua,” while Europeans are called “Pakeha.” The traditional greeting of pressing noses is called hongi. Perhaps most important to the wine region, “wainia” is Maori for wine [source: Learning Media]. ­

The first vines were planted in New Zealand in 1819. In the Gisborne region, the first commercial wine was released in 1921 by German winemaker Friedrich Wohnsiedler. Yet it wasn't until the 1970s that viticulture began to play a significant role in Gisborne [source: Gisborne Winegrowers].

By the end of the 1970s, Gisborne was the largest wine-producing region in New Zealand. It became known as "carafe country," thanks to huge yields of Muller-Thurgau grapes, which were used for cheaper bag-in-the-box blends. Since then, Gisborne's wine industry has shifted focus toward lower-yielding, classic varieties that are higher quality and more profitable, helping to shake off its reputation as a bulk-wine producing region [source: Stevenson].

Today, Gisborne is the third largest grape growing region in New Zealand, with 4,800 acres (1,942 hectares) of vines planted. Most of the vines in Gisborne are planted on flat or gently sloping land. The fertile soil is clay- and loam-based. Summers are mild, while winters are cooler and stormier. Though some of the highest mountain peaks in New Zealand are permanently snow-covered, in the lowlands, temperatures don't go below freezing [source: Gisborne Winegrowers].

The biggest producer in the Gisborne area is Pernod Ricard (formerly Montana Wines, which bought Penfolds and Corbans), and produces about 65 to 70 percent of the region's product each year, or vintage, from its 3,120 acres (1,263 hectares) in the area. While Gisborne is not known for its sparkling wine, or "Kiwi Fizz," most of those grapes are grown for Pernod Ricard's Lindauer Brut [source: On the Vine].

To find out what the famous wines of the Gisborne wine region are and where to find them, read on.

There are 17 wineries open to the public in the Gisborne region; some even host outdoor concerts. One of the local radio stations offers an annual concert series at a number of wineries throughout February. The area also hosts the annual International Chardonnay Challenge and the Gisborne Wine and Food Festival [source: On the Vine]. ­

Although New Zealand's Cabernets and Merlots are lauded for being rich and ripe, offering more quality and character than those from Bordeaux, Gisborne's red wines (Merlot, Malbec and Pinotage) have not been as successful as the region's whites [source: Stevenson].

Here are some particular New Zealand wines of note from the Gisborne region, some of which are recommended by industry experts. Others have won recent awards at the 2008 New Zealand International Wine Show and 2008 Liquorland 100 [source: Stevenson, Gisborne Winegrowers]:

Whether you prefer to taste a Chardonnay or Sauvignon Blanc from Gisborne in its local setting or treasure it at home, remember that you're experiencing a unique wine produced from the southernmost winemaking region on Earth. Drink up!

To learn more, visit some of the links on the following page.

From Wine to Whales

Whangara is a seaside town about 18.6 miles (30 kilometers) north of Gisborne. The movie Whale Rider about the legendary Paikea, who traveled to New Zealand on the back of a whale, was filmed there. You can even take a guided tour of the village that is led by a cultural consultant on the film. Continue a few minutes up the road to Tatapouri Bay, where visitors can walk the reef and hand-feed wild stingrays [source: Strong]. ­