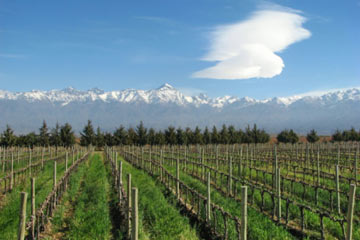 Argentina is among the top five wine producing regions (by volume of wine produced) in the world.
Hemera/Thinkstock

When you think of fine wines, a few countries or regions renowned for winemaking probably spring to mind: France, Italy, Spain and even relative newcomers like California, which produces 90 percent of the wine made in the United States. But while Argentina may not have been one of the first countries on your personal wine list, this South American nation joins those better-known wine superpowers to round out the top five wine producing regions (by volume of wine produced) in the world.

Argentina, a country about three-tenths the size of the United States, stretches from the center of South America to its southernmost tip and encompasses an impressive range of climates, from subtropical in the north to sub-Antarctic in the south, with the Andes Mountains to the west, beaches to the east, and foothills, deserts and grasslands in between. The country's broad diversity of both latitudes and altitudes makes for some of the most extreme winegrowing terrain in the world.

Those at all familiar with Argentinian wines probably know the country best for its malbec, a big, flavorful red, but the variety of grapes grown here -- and of both red and white wines produced here -- is as wide-ranging as the landscape. Read on to learn about the regions of Argentina's wine country, the history of its winemaking, and the varieties that are slowly but surely attracting international notice and securing Argentina's position in the world.

Argentina's wine-producing regions are found primarily along the western edge of the country, stretching north to south along the curving backbone of the Andes Mountains, but the nation's wine industry is spreading eastward, too: Of the country's 24 provinces, at least 13 are wine producers.

More than 80 percent of all Argentinian wine is produced in Mendoza, a province in the Andean foothills and high foothills of west central Argentina. Ranging in altitude from 1,640 to 4,921 feet (500 to 1,500 meters) above sea level and receiving an average of just less than 8 inches (20 centimeters) of rain each year, Mendoza produces 14 different varieties of grape, from the well-known malbec, cabernet sauvignon and pinot noir to white-wine grapes including torrontes and chardonnay.

Argentina's second largest wine producer is the province of San Juan, just north of Mendoza in the west central region of the country. The San Juan Valley, as the group of valleys between the Andes Mountains and the San Juan River are collectively known, ranges in altitude from about 1,968 to 3,937 feet (600 to 1,200 meters) and is best known for its syrah grapes, but also produces 12 additional varieties including merlot, cabernet sauvignon and chardonnay. Just to the north of San Juan, La Rioja features a dry, warm and sunny climate perfect for producing torrontes, as well as cabernet sauvignon, syrah and malbec.

Salta is the northernmost wine producing region in Argentina, and with altitudes ranging from 5,577 to 9,842 feet (1,700 to 3,000 meters) its vineyards are the highest commercial vineyards in the world. Although just 5,184 acres (2,098 hectares) are planted with vines, as compared with Mendoza's 392,484 acres (158,833 hectares), the region grows at least eight varieties of grape, and its torrontes white wines are considered among the best in the world.

The Rio Negro province stretches west to east across the southern region of Argentina known as Patagonia, touching both the Andes and the Atlantic coast. Most wine is produced in the Rio Negro Valley, just 984 feet (300 meters) above sea level. Rio Negro and its neighbor to the west, the province of Neuquen, lay claim to the southernmost vineyards in the world. With average annual temperatures of just 59 degrees Fahrenheit (15 degrees Celsius), this area is no Napa in terms of its climate, but together the two regions produce eight varieties of red and white grapes.

While most of the vineyards in Neuquen, the fastest-growing wine producer in Argentina, are less than a decade old, the history of Argentinian winemaking goes back much further than that. We'll talk history next.

Well, it depends who you ask. The country's official title is the Argentine Republic, and the U.S. State Department lists "Argentine" as both the proper term for a person from Argentina and the adjective used to describe, say, an Argentine wine. The "Argentinean" spelling is common in U.S. usage (Argentinean wines, Argentinean beef). But the most widely accepted spelling in modern English usage (and the one preferred by the Oxford English Dictionary) is "Argentinian," so that's the one we'll go with here! 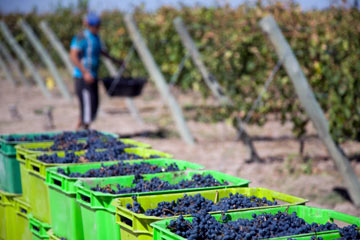 The first Argentinian vines were planted in the Mendoza region sometime in the mid-16th century by newly arrived Spanish settlers.
iStock/Thinkstock

According to The Real Argentina Web site, the first Argentinian vineyards were planted in the northern part of the country and the Mendoza region sometime in the mid-16th century by newly arrived Spanish settlers who needed grapes to make communion wine. Their primitive winemaking techniques continued for the next 300 years or so, until European settlers brought their own tastes and winemaking traditions to their new home. Sometime around 1860, a French agronomist named Michel Pouget brought vine cuttings of malbec, cabernet sauvignon and syrah from France, introducing both a higher quality of grape and more sophisticated growing techniques.

The widely varying climate and terrain of Argentina proved to be ideal for grape growing, with good soil, plenty of sunshine and temperatures suitable for any number of grape varieties. This broad diversity in growing regions helps to explain the continued influence of other cultures and nationalities on Argentina's wine industry: No matter where in the world you are from, or what sort of wine you hope to produce, you can probably find a region of Argentina where the conditions are just right. So cabernet sauvignon grapes from southwestern France thrive here, as do the sweet rieslings associated with the Rhine region of Germany.

While the Argentinian wine industry is behind only Italy, France, Spain and the United States in terms of production volume, Argentina is still very much an up-and-coming wine region, and the industry here is still very young compared to other international wine producers. Until just a few decades ago, the majority of production was devoted to high-volume, low-quality grapes such as the criolla grande used for the inexpensive table wines traditionally consumed mostly by residents of Argentina. Today, the malbec grapes in Argentina far exceed the quantity (and, many would argue, the quality) of malbec grapes in their native France. Of course, malbecs are far from the only game in town. Argentina produces no fewer than 15 distinct varieties of grape. Read on for a description of a few of the most commonly grown.

There's no escaping malbec in a discussion of Argentinian wine, but why would you want to? First grown in southern France, malbec grapes grow well in both the high and low altitudes throughout Argentina. The result is a deep red wine with notes of plum and cherry that has become the quintessential Argentinian wine.

Bonarda grapes are the second most cultivated grape in Argentina (in terms of growing area planted with the variety). Bonarda grapes are commonly used in blends or for cheap red table wines intended primarily for domestic use.

Cabernet sauvignon, the hybrid of sauvignon blanc and cabernet franc grapes, also thrives throughout just about every region in Argentina.

The ubiquitous merlot, a red popular for its smooth flavors and floral or fruity undertones, loves the cooler regions of Argentina, particularly the Rio Negro province.

Tempranillo, a red typically associated with Rioja, Spain, was among the earliest grape varieties to come to Argentina. It thrives in the warm areas of the Mendoza region, resulting in a wine with intense color and a lot of tannins.

Criolla grande grapes have been grown in Argentina for centuries, and have flavors and characteristics unique to this area of the world. Of course "unique" isn't always a good thing: Criollas are typically associated with the lower quality wines that were once a trademark of Argentina's cheap table wine industry.

Just as malbec is the quintessential red of Argentina, torrontes is the country's most important white. The torrontes riojano grape is the only varietal native to Argentina, producing crisp white wines that are fruity, yet balanced and dry rather than overly sweet.

Chardonnay, a white grape first produced in France and popular throughout the world, is widely grown in the central, northern and southern wine growing regions of Argentina.

To read more about great wines, visit the links on the next page.