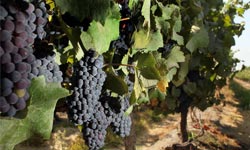 Grapes hanging from the vine at the Montgras winery in Santa Cruz, Chile.
Joe Raedle/Getty Images

Vineyards in France, Italy and California have long served as some of the world's top wine producers. While these and other traditional winemaking regions have become synonymous with great vino, some of the most celebrated bottles now come from a place you probably don't associate with fine wine: Chile. After years of mostly domestic sales, as of March 2011, the country is one of the top 10 wine exporters in the world.

Chile's topography makes it the perfect locale for wine production. The country's more than 800 miles of coastline nestled between the Andes Mountains and the Pacific Ocean protect its grapevines from pests that plague other parts of the world. Melting snow from the Andes flows into Chile's wine-growing areas, providing vital irrigation despite a relatively dry climate, and interestingly, many of Chile's vineyards were started using vines imported from France.

So how did French grapes reach a South American country that was settled by the Spanish? Read on to learn about the origins and current state of Chile's wine industry.

Though most of the world has only recently discovered Chilean wine, wine production in the country dates back to the 16th century, when Spanish conquistadors planted grapevines from France's Bordeaux region in Chile's central valley. For centuries, these vineyards sold wine only to locals. Outsiders largely ignored Chilean wine, and many associated it with poor quality and bad production techniques.

Toward the end of the 20th century, visitors to Chile began to recognize the natural geographical advantages enjoyed by the country's vineyards. This attention, combined with an increasingly stable government and society within Chile, spurred large-scale investment in Chile's wine industry. In just a few short years, Chile had become the world's 10th largest wine exporter, with annual sales of $1.3 billion, and as of March 2011, Chile is the 4th biggest exporter of wine to the United States.

In February 2010, a massive earthquake caused significant damage to Chile's winemaking regions. Some sources estimate that 12 to 20 percent of the country's wine was lost, in addition to infrastructure damage. By spring of 2011, wine production in Chile was largely back to normal, and even remote hotels had reopened to welcome tourists back to visit the country's vineyards.

Chile is home to a number of winemaking regions, each of which offers its own distinct flavors and charms. Throughout much of the country, vineyards on the coast take advantage of the cooler temperatures to produce white wines, while those located inland rely on warmer weather to produce reds.

The Casablanca Valley serves as the primary white wine region in Chile. Its position in the northern portion of the country is tempered by its proximity to the coast to create the perfect climate for growing wine grapes. Vineyards in Casablanca produce much of Chile's chardonnay and sauvignon blanc, along with lesser-known whites and sparkling wines.

Farther south and inland, you'll find the Maipo Valley, which is Chile's oldest winemaking region and serves as the center of cabernet and merlot production. Santiago, the country's capital, is in the heart of the Maipo Valley, allowing easy access for visitors to this region's 30,000 acres of vineyards.

South of the Maipo Valley is the Rapel region, which is home to the Cachapoal and Colchagua valleys. Carmenere and other favorites are produced here, and Rapel is also home to Apalta, Chile's most recognized vineyard. This area is also the most popular for tourists due to its rich history, rugged terrain and countless vineyards located in close proximity to one another.

Continue to the next page to learn about variety within the Chilean wine industry, as well as the country's signature blend.

The Chilean wine industry is known for its versatility, with almost every major type of vino represented. While the country produces several varieties of white wine, Chile is probably most recognized for its selection of reds. In terms of volume, cabernet has long served as the country's bestseller, but Chile is also known for producing two very different types of syrah, made from dark, flavorful grapes.

For years, Chile produced large quantities of what was thought to be merlot. In the 1990s, wine enthusiasts from France spotted the grapes used for this wine in a Chilean vineyard and were able to identify them as carmenere, rather than merlot. The deep, dark purple carmenere grape was once grown throughout France, but a devastating insect infestation in the 19th century virtually eliminated these vines. Luckily, the Spanish had already planted clippings in Chile, where they were rediscovered more than a century later. Since then, carmenere has become Chile's signature wine.

Continue to the next section to learn why Chilean wine has caught the attention of wine enthusiasts from around the world.

Chilean wine tourism has skyrocketed in recent years, as visitors flock to Chile's many vineyards, particularly in the Culchagua Valley. While travelers can take their pick of fine hotels and restaurants in the area today, as recently as the late-1990s, the area had no significant tourist infrastructure. In an area where vineyard owners once put up guests in their own homes due to a lack of hotels, a wine train now winds through the valley to take visitors on tasting tours.

Through the end of the 20th century, Chilean wines were often associated with poor quality, including bad taste and rudimentary winemaking techniques. Outside investment transformed this industry by bringing in better equipment and more effective production techniques to Chile's vineyards.

Today, Chilean wines are known for their versatility and vastly improved taste. Chile's alluvial soil, which is rich in minerals and organic matter, adds unique dimensions of flavor to grapes grown in the region. A long, dry growing season allows grapes to develop slowly over time, bringing out their every nuance. The country's coastal geography also creates big changes in temperature from day to night, which locks in the acidity of the grapes.

In addition to ever-increasing quality, Chilean wines remain surprisingly affordable. In fact, a top-rated bottle by The New York Times in 2007 cost just $9. In 2008, more than 88 percent of Chilean wines in the U.S. sold for less than $10 a bottle, with most priced between $3 and $7. Even as some Chilean vineyards began to focus on premium bottles at a higher price point, average prices for Chilean wines still hovered around $5 per bottle as recently as June 2011.

These low prices persist largely because the region is still considered up-and-coming and can also be attributed to the country's natural winemaking advantages. Vineyards in Chile are among the only wine regions in the world not plagued by phylloxera, a pest that has ravaged other vineyards. The lack of pests, combined with rich soil, largely eliminates the need for pesticides and fertilizers; this means that Chilean wines often cost less to produce than wines in other areas, resulting in a lower price for consumers.

Tempted by the low cost and wide variety of Chilean wines? Read on to learn how to pick the perfect bottle to complement your favorite meals.

The Chilean wine industry enjoys a reputation for sustainability, environmentalism and social responsibility. This can be partially attributed to a commitment to sustainability made by the trade organization Wines of Chile but is at least partially due to circumstance. Quality soil and lack of pests reduce levels of harmful chemicals used in Chilean vineyards, resulting in less runoff and pollution. 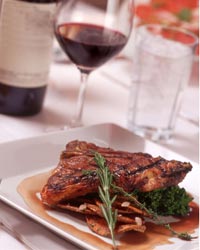 Many of Chile's red wines pair well with beef and other savory meats.
©iStockphoto.com/Jacob (Cobi) Babchuk

Ready to give Chilean wine a try? Maximize your drinking experience by pairing your bottle with the right food to complement, or even heighten its flavor. White wines, such as a fresh and light bottle of sauvignon blanc, work best with salads, cheeses and almost any type of shellfish. The rich, oaky flavor of chardonnay brings out the best in salmon and other oily fish dishes and poultry, and the spicy, floral taste of riesling complements the savory nature of traditional Peruvian cuisine.

If reds are more up your alley, you'll find Chilean cabernet to be the most versatile of the country's wines. This intensely dark red wine pairs well with pizza and burgers. Syrah, which has hints of pepper, berries and plum, is commonly served with lamb and beef, as well as sausage and other pork dishes.

For a true taste of Chile, pick up a bottle of the country's signature carmenere. Rich in cherry and raspberry but tempered with a bit of spice, carmenere serves as the perfect complement to Chilean cuisine. Try it with red meat or corn dishes, including classic Chilean meat pies, Spanish paella and even your favorite chocolate.

Affordable, sustainable and versatile -- what's not to love about Chilean wine?