by Heather Kolich
NEXT PAGE 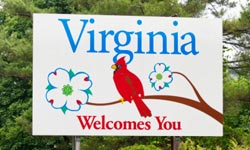 Virginia has more than 20 wine trails throughout the state.
iStockphoto/Thinkstock

Although it's still relatively new to modern winemaking, Virginia has a long history in the industry. The first attempts to grow European wine grapes occurred -- by law -- at the Jamestown settlement in the early 1600s. The imported vines were a bust, even when Thomas Jefferson and George Washington tried to cultivate them more than a century later.

Virginia growers finally found success with grapes native to North America. The Virginia norton wine earned the top award among wines of all nations at the 1873 Vienna World's Fair, and took a gold medal at the Paris World's Fair in 1889. Then, in 1920, Prohibition shut down the industry.

Virginia vineyards made a comeback in the 1960s, when growers grafted European grapes onto hardy, disease-resistant native American grape rootstock. Now Virginia vineyards grow a wide variety of Old World wine grapes in a climate very similar to their parent regions. Virginia's terroir -- the soil, climate and environment where wine grapes are grown -- imparts distinct qualities to the grapes. See why on the next page.