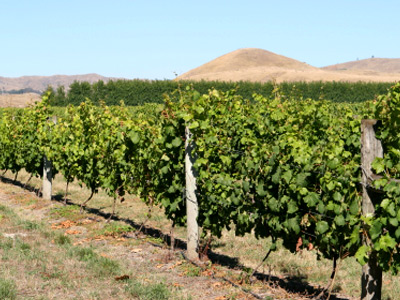 The Hawke’s Bay region of New Zealand is a major grape growing and winemaking area, coming in second for overall wine production within the country. See our collection of wine pictures. ­
iStockphoto/Peter Seager

­If you know anything about wine, then you know that the big wine producers are France, Italy and Spain. If you're ­a connoisseur, then your wine collection might include some American and Australian wines, too. But what about New Zealand? This small country of islands may not even be on your wine radar -- but maybe it ought to be. And if you are a lover of reds, you might want to hone in on winemakers from the Hawke's Bay wine region.

The Hawke's Bay wine region produces more red wines than anywhere in New Zealand, and stays a strong second in wine production overall for the country [source: Wine Hawke's Bay]. Located in the North Island, on the eastern coast of New Zealand, the Hawke's Bay wine region has some hills but is dominated by flat plains that are perfect for vineyards. The Heretaunga Plains (also Hawke's Bay's original name when it was settled in the 9th century) host the majority of the wineries in the region around the cities of Hastings and Napier [source: Wine Hawke's Bay]. Those plains see a lot of sunlight during the region's long, dry summers. The lengthy days filled with sunlight, stretching for months of summer, directly contribute to the robust red grapes that make up this region's viticulture.

­Though the region is relatively singular in climate and landscape, the soils are very diverse [source: NZ Wine Connection]. This diversity allows several different varieties of grapes to be planted there, though you'll still really only find reds in the region.

In this article, you­'ll learn about the history and culture of the Hawke's Bay wine region, as well as the agriculture that produces the perfect grapes for rich, bold reds. Though this region had a late start (in mere settlement, not to mention vine plantings and grape production) coupled with an early interest in rough fortified wines, Hawke's Bay has blossomed into a leader of New Zealand wines that are becoming popular internationally.

The Hawke's Bay wine region is a downright newborn in the winemaking business when compared to some other regions. Though many popular wine regions have wines dating back to the B.C. days of the Greeks or the Romans, the area that is today known as Hawke's Bay wasn't even settled until around the 9th century [source: Hawke's Bay NZ]. In some cases, that's more than a millennium after other winemaking regions cultivated their vines. The Maori came to Heretaunga, or what Hawke's Bay was then known as, around the 800s, and the Europeans didn't arrive until the late 18th or early 19th century.

Catholic French missionaries brought vines to plant in 1851 in order to make wine for Mass [source: New Zealand]. Good thing they did, as that led to table wine and the production of wine in the region. Much of the early wine in the Hawke's Bay region, however, was tough fortified wine that had additional alcohol added to it. Within a few decades, however, wealthy farmers and planters in the region became aware of French wines and began a shift. By 1900, a few wineries were beginning to produce classic reds.

Today, wine is a popular aspect of the region. In a tourism and marketing effort, the region has rebranded itself as the Hawke's Bay Wine Country, increasing its international presence as a red wine supplier [source: Hawke's Bay NZ].

To discover how the agriculture influences the winemaking of Hawke's Bay, read on to the next page.

Though you might find the history of old wineries in Hawke's Bay a bit suspect since many were making fortified wine a century ago, fear not. There are several wineries that have been around for at least 100 years, making wine inspired by the French. The Te Mata Estate dates back to 1892, after a visit from the French piqued a farmer's interest. The oldest continuous vineyard in New Zealand, however, is also located in Hawke's Bay. Started by French missionaries more than 150 years ago, the Mission Vineyard continues to produce popular reds [source: New Zealand]. ­

If you like long, hot summer days, you'd have something in common with grape crops. And you'd also happen to love the climate of the Hawke's Bay wine region. The region's lengthy summers are perfect for red grapes that are slow to mature [source: Worldwide Wine Tours]. The climate is also rather arid and moderate, assisting the grapes in their leisurely ripening.

Though a fair amount of the land is plains, the Hawke's Bay wine region is also home to a variety of soils. Because of this, many different types of grapes can be planted leading to a wide variety of wines. Not only is Hawke's Bay the oldest wine producing region in New Zealand, but it is also the leading producer in terms of the number of different varieties [source: New Zealand Wine].

There are some hills in the region where sheep and other livestock are bred, but the majority of its landscape is flat. These rolling lands, coupled with long days of lots of sunshine, are not only popular with the grapes but also with the tourists. Bicycling around the Hawke's Bay wine region is common and there are even two cycling tours that let you visit vineyards and wineries within Hawke's Bay [source: New Zealand].

To learn about the quickly rising reds of the region, read on.

Planning a Trip to Hawke's Bay

If you're a lover of reds and want to take a trip to New Zealand's Hawke's Bay wine region, consider going in the beginning of July. Each year, the annual Hot Red Hawke's Bay Wine Expo takes place in the beginning of July, featuring 20 wineries. Visitors can meet winemakers and sample more than 100 wines from the region [source: NZ Live]. If you're looking to get away in February, consider the area's "big wine weekend" [source: Hawke's Bay NZ]. Harvest Hawke's Bay in February is the largest of several wine festivals throughout the year. ­

There's no doubt here -- if you're visiting the Hawke's Bay wine region, you better like reds. After all, it is the leading producer of red wines in New Zealand and holds its own wine festival devoted strictly to reds.

This overwhelming popularity of reds is not without reason. Merlot, Cabernet Sauvignon and Cabernet Franc, and Syrah grapes take up more than three-quarters of New Zealand's grape population [source: Wine Hawke's Bay]. Chardonnays are also a very popular choice in Hawke's Bay. This grape claims the most land within the Hawke's Bay wine region [source: NZ Wine Connection].

Though Chardonnays are possibly Hawke's Bay's biggest producer, the region's Merlots are nothing to sneeze at. These reds are some of the best in the entire country of New Zealand, coupled with some great Syrah reds that have a robust, spicy tang to them.

One last wine variety that has proven popular in the Hawke's Bay wine region is Pinot Noir [source: Worldwide Wine Tours]. Coming from grapes that are actually rather quick to ripen, they grow well in Hawke's Bay and are cultivated much earlier than the rest of the red grapes that dominate the region's landscape.

Though New Zealand may not be first on your mind when considering wines, if you enjoy a good red, you owe it to yourself to check out the Hawke's Bay region. Who knows? Maybe you'll even decide to pop in for a visit to one of its popular wine festivals.

For more information, visit the links on the following page.

Though one winery owner attributes higher alcohol concentrations to the long summer days, which consequently lead to long-ripening grapes, one can't help but wonder if the fortified wines of Hawke's Bay's past are coming back into play here. The Reserve Chardonnay at Clearview Estate has an alcohol level of at least 14 percent all the time -- that's one wine that packs a punch [source: New Zealand]! ­