The Hawke's Bay wine region is a downright newborn in the winemaking business when compared to some other regions. Though many popular wine regions have wines dating back to the B.C. days of the Greeks or the Romans, the area that is today known as Hawke's Bay wasn't even settled until around the 9th century [source: Hawke's Bay NZ]. In some cases, that's more than a millennium after other winemaking regions cultivated their vines. The Maori came to Heretaunga, or what Hawke's Bay was then known as, around the 800s, and the Europeans didn't arrive until the late 18th or early 19th century.

Catholic French missionaries brought vines to plant in 1851 in order to make wine for Mass [source: New Zealand]. Good thing they did, as that led to table wine and the production of wine in the region. Much of the early wine in the Hawke's Bay region, however, was tough fortified wine that had additional alcohol added to it. Within a few decades, however, wealthy farmers and planters in the region became aware of French wines and began a shift. By 1900, a few wineries were beginning to produce classic reds.

Today, wine is a popular aspect of the region. In a tourism and marketing effort, the region has rebranded itself as the Hawke's Bay Wine Country, increasing its international presence as a red wine supplier [source: Hawke's Bay NZ].

To discover how the agriculture influences the winemaking of Hawke's Bay, read on to the next page.

Though you might find the history of old wineries in Hawke's Bay a bit suspect since many were making fortified wine a century ago, fear not. There are several wineries that have been around for at least 100 years, making wine inspired by the French. The Te Mata Estate dates back to 1892, after a visit from the French piqued a farmer's interest. The oldest continuous vineyard in New Zealand, however, is also located in Hawke's Bay. Started by French missionaries more than 150 years ago, the Mission Vineyard continues to produce popular reds [source: New Zealand]. ­ 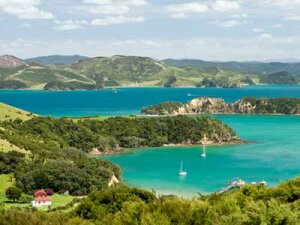