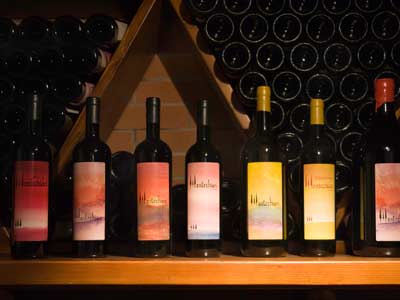 The Montechiari Winery in Tuscany offers a wide selection of wines. See our collection of wine pictures.
iStockphoto/Beverly Vycital

­Italy is one of the world's foremost names in wine production, in constant competition with powerhouse France for the title of world's top producer. Hand i­n hand with their large-scale production, Italy is a dominating force in exporting. Almost everyone is aware of the country's impressive reputation for viticulture. It's hard to think of wine and not think of Italy. Not only is their historical influen­ce significant, but they have exceeded many standards of quality. They even have more than 300 DOC and DOCG recognized zones [source: Italian Made]. The climate is great for growing grapes. The long shape of the country, with a majority of borders touching water, has seen great success in grape cultivation.

­The Greeks are said to have introduced wine making to Sicily and southern Italy. Their influence didn't spread right away, so the Etruscans showe­d the art of viticulture to those living in central Italy. Then the Roman influence reshaped and focused the techniques of the region, creating a more effective process for pressing grapes that allowed producers to pull out more juice per grape. The Romans also discovered that storing wine in barrels and glass bottles let it age in a way that improved its taste. This was important not only for quality, but also for storage and exporting. The barrels and glass bottles made it easier to send Italian wine outside its borders, introducing the world to its many varieties. America and other European countries began to appreciate and demand Italian wines [sources: Muhawi, Italian Wine Connection].

After thousands of years producing wine, there were bound to be difficulties. In older times, Italy often kept its best wine within the country. They exported wine that was still good, but they kept their treasures for themselves. However, the government decided that quality worldwide should be their goal. As a result, the Italian government began regulating the industry in the 19th and 20th centuries [source: Muhawi].

Italy is divided into regions of wine production. To learn what these regions are, read on.

Italy has more than 20 regions of land distinguished from each other. Within these regions, which span the length of the country, variations of climate or terrain allow the country to produce a wide array of grapes and thus, wines. For example, just to produce the majority of Italy's red wines, 21 variations of grapes are grown and pressed [source: Dummies]. From the northern regions to the South, Italy seems to have found a way to grow grapes just about anywhere. Not only have they mastered the upbringing of their domestic grapes, but also today, Italy has even found success with many foreign grapes. In the end, they put a bit more emphasis on perfecting their domestic grapes, aiming to create wines with Italian specific taste [source: Italian Made].