Ketchup: How to Keep the Non-Newtonian Fluid From Messing Up Your Next BBQ

It's that time of the year again in the Northern Hemisphere: The sun is out, the grass is starting to green and people are getting ready for their first outdoor barbecue (or will be soon).

But every year at those barbecues, we're presented with the same vexing issue: how to get the desired amount of sauce onto those ever-present hot dogs and hamburgers without creating a mess.

As the video from the University of Melbourne reminds us, this issue arises because ketchup and other condiments are what's called soft solids, yield stress fluids or non-Newtonian fluids. Other examples are mud, industrial products like cements or mortars, and toothpaste. And Silly Putty.

Unlike water, which flows easily out of a bottle, ketchup, as a non-Newtonian fluid, prefers to reside in the bottle, particularly a glass bottle. So ketchup's actually a liquid with a bunch of stuff suspended in it, and all the suspended bits form a network. The only way for it to flow is if you, the hungry person at the barbecue, apply a force, like the smack of your hand, to the glass bottle to break that network of suspended solids. Without such a force, ketchup will just behave like a solid.

There's actually a whole field called rheology devoted to the study of these fluids that get their name courtesy of Newton's law of viscosity. Non-Newtonian fluids don't have a constant viscosity; their resistance to flow changes with the amount of force applied. When a non-Newtonian fluid yields to pressure and starts to flow, the viscosity decreases the faster it flows. So, a greater force (hitting the ketchup bottle) can generate viscosity that's similar to water, ultimately causing a ketchup explosion and sticky hands.

But fear not. With science and the University of Melbourne on your side you can take authoritative steps to overcome this issue. Here's their advice:

1. Shake the bottle with the lid on.

Giving the bottle a good shake helps the particles inside the bottle mix together and re-homogenize, taking care of ketchup that's too watery or dried-out.

2. Turn the bottle upside down, also with the lid on.

This brings the contents toward the bottle's point of exit. If the bottle is close to empty, this also may require force on the other end of the bottle to guide the sauce to the bottle neck.

3. The best part: Pour some on your hot dog or burger!

Some force will need to be applied to get the ketchup to exit the bottle, but not too much or you'll have sauce everywhere. Take off the cap and turn the bottle at an angle toward the food needing the sauce, continue to turn it at an angle until it begins to flow. If the sauce does not exit the bottle when it is almost upside down, give it more force is required. To do this, hold the bottle at a 45-degree angle, provide firm taps to the top of the bottom; you're essentially balancing the force applied with the viscosity of the sauce in order to get it to flow.

So if burgers and hot dogs are in your future, employ these tips to perfectly execute the removal of all types of condiments from glass bottles and show off to your friends!

Now That's Interesting
Ketchup likely started its long and illustrious condiment life in Asia as a briny fish sauce and traveled to Europe via the trade routes in the 1600s.

Rockabye Baby in a Smart Crib From Ford

So Here's a Terrifying New Anxiety for Backyard Grilling Season 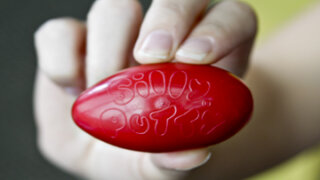 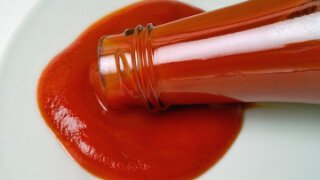 Why does ketchup taste differently in different countries?

Swordfish Are the Natural-born Gladiators of the Sea
July 7, 2020