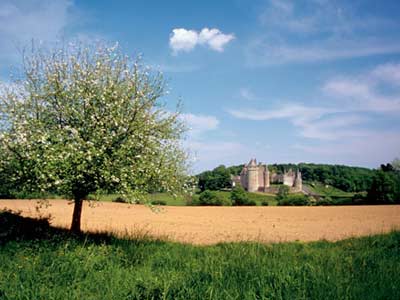 The French nobility favored the Loire Valley, sometimes calling it the "Garden of France." See our collection of wine pictures. ­
Medioimages/Photodisc/Getty Images

­The longest river in France, the Loire, winds for ­more than 630 miles (1,000 kilometers), northward then westward, through the heart of the country into the Atlantic. Loire Valley starts in the center of the French nation, in an area called Centre Loire, moving westward, and includes the Touraine area around the city of Tours, then Saumur, Anjou and the coastal district of Nantes. The hist­oric grandeur of this region vividly strikes visitors of cities such as Orleans, Blois, Touraine, Amboise and Chinon. Along the way, smaller villages and townships dot the lush landscape.

The French nobility favored the Loire Valley, sometimes calling it the "Garden of France" for its natural beauty, fertile soil and mild weather conditions. There they built some of the most famous castles in France, which led to the Loire Valley region being recognized by the United Nation's Educational, Scientific and Cultural Organization's (UNESCO) World Heritage List in 2000. The list recognizes areas that encapsulate their cultural and natural heritages -- giving them "outstanding universal value" [source: UNESCO, Luxury Traveler]. Basically, that means Loire Valley is hot stuff.

­Loire Valley is also famous as a wine-producing region with some 163,000 acres (66,000 hectares) devoted to grapes and vineyards [so­urce: Daskal]. The tremendous diversity of its geology and climate conditions make the Loire Valley the only part of France that reliably produces world-class wines of every type: red, white, sweet, dry, still and sparkling.

The stamp of approval for French wine is known as the Appellation d'Origine Contrôlée (AOC). The Loire Valley region encompasses more than 60 AOCs [source: Vins de Loire]. Whether you are a wine novice or you're looking to expand your cellar collection, the Loire Valley wine region may have something just for you.

Restaurants in France stock Loire Valley varieties on their wine lists more often than wines from any other region. These varieties - the Muscadets of Nantes, Chenin Blancs of Anjou-Saumur, Vouvrays of Touraine, and Sancerres and Pouilly-Fumes of the Loire Centre - are uniformly affordable, comfortable and easy to match with a variety of foods.

The Loire Valley has played a major role in French history since ancient times, and wine has alway­s been an important part of the culture and life of the region. Viticulture in the valley dates back to its invasion by the ancient Romans, although vines and vineyards may already have existed there before then. Local lore has it that the first Loire Valley vintner was Saint Martin, bishop of Tours, around the year A.D. 380 [source: Places In France]. After the Roman Empire fell, monastic orders such as the Benedictines preserved the vineyards and winemaking practices. In medieval times, the Loire River was an important means of transport; vineyards sprung up along the riverbanks for ease of trade. Eventually, Loire Valley wines were shipped out from Nantes for export to the British Isles, Flanders and elsewhere in northern Europe [source: Vins de Loire].

The first English King of the House of Plantagenet, Henry II, was born in the Loire Valley in 1133. His marriage to Eleanor of Aquitaine gave him control of substantial French countrysides and vineyards. After he claimed the English throne, he ordered that Anjou wines be served at court. Soon, everyone wanted to be like Henry II, and the royal tradition of drinking Loire Valley wine began [source: Vins de Loire].

During the Renaissance period, especially during the 15th and 16th centuries, the Loire Valley reached its peak as the playground of royalty and nobility. At this time, the magnificent castles (or châteaux) were constructed, and vineyards blossomed and prospered throughout the valley. The French Revolution led to the destruction of vineyards south of Nantes, in response to a peasant uprising in Vendée in 1793 [source: Vins de Loire]. A century later, the great phylloxera (grapevine insect) infestation decimated wine production for an entire generation. As the French recovered from the phylloxera, wine makers and drinkers alike wanted reassurance of quality. And so the AOC label was born.

Read on to learn about the rich agriculture of Loire Valley's wine region.

St. Joan of Arc is legendary in the Loire Valley region and is considered a regional, as well as national, hero. The famous female fighter stood up to the English in the early 1400s and paid the ultimate price for her rebelliousness by being burned at the stake. Her efforts were later embraced by the Catholic Church, and she was subsequently sainted [source: New Advent]. ­

The Loire Valley is France's second largest agricultural region. Food production and processing re­present the largest sector of the area's economy, with meat, dairy and fish among the primary products -- alongside wine. The valley's farms are notable for their emphasis on gourmet production and environmentally sustainable methods. Loire Valley is France's leader in organic agriculture, with more than 143,000 acres (60,000 hectares) organically cultivated [source: Pays de la Loire].

The success of the Loire Valley wine industry owes much to the idea of terroir. This word refers to the combination of factors lending character to the wines grown in a specific location -- qualities like the mineral composition of the soil, climate conditions, altitude and the angle of the sun, plus the varietals grown and harvesting techniques used. Researchers at the National Institute of Agronomical Research, near Angers, have proven that the same species of vines, planted in neighboring fields, produce markedly different wines year after year, solely because of subtle differences in terroir [source: Kunzig]. This boosts the validity of all those AOCs.

A glance at any of the region's AOCs reveals terroir at work. In the Nantes area, for example, the coastal breezes bring warmth to the sandy soils, which is especially beneficial to the Muscadet grape [source: Daskal]. In Centre Loire, lie the two adjacent regions of Sancerre and Pouilly-sur-Loire. The soils of Sancerre contain limestone, lending a chalky quality to Sancerre white wines, made from Sauvignon Blanc. The flinty soils of Pouilly, on the other hand, give the Sauvignon Blanc vines a smoked (fumé) flavor, which is why that region's white is called Pouilly-Fumé [source: Comiskey]. Strong mineral notes, reflecting the geological footprint of their origin, are a hallmark of Loire Valley wines. And speaking of those wines, there are many to choose from. Read on for a summary of the most famous Loire Valley labels.

One of the most influential Loire Valley vintners is Nicolas Joly, owner of the Coulee de Serrant vineyard in Savennières, which has been producing Savennières white from the Chenin Blanc grape for more than six centuries. Joly’s approach is not just organic but biodynamic. Rejecting fertilizers, pesticides and vine cloning, biodynamic agriculture seeks to restore and preserve the soil’s vitality -- to enliven the vine by nourishing the soil around it. Joly’s approach falls outside the mainstream, but represents the logical conclusion of the principle of terroir [source: Prial]. ­

­There are many varieties of wine to choose from when honing in on Loire Valley. The easiest way to find the best of the best ­is to search for the appellation labels. If you can't go to France to tour the vineyards, you can easily figure out where your wine is coming from by looking for the regional AOCs. Take a look at these designations by type:

If you are looking for something a little less fancy, it's not hard to discover more world-class Loire Valley wines online or on the shelves of quality wine shops. More than 95 percent of Loire Valley wines are either AOC or the next level down, Vins de Pays. Don't be fooled by the affordable price tag on most Loire Valley bottles--many are wines of the highest quality [source: Daskal].

The green trend is hitting the wine industry -- with boxes. It turns out that wine producers in the United States are pumping out massive amounts of carbon dioxide during the shipping process. Boxed wine has had a less than favorable reception among many American wine drinkers, but that's not the case in other countries such as Australia. The industry is listening to environmental concerns and now, many wine-producers are looking into alternative wine box packaging [source: Colman]. ­