Browse the article Ultimate Guide to the Lombardy Wine Region 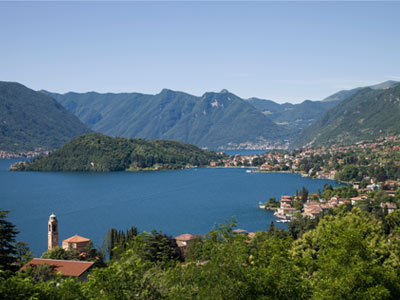 ­Lombardy is the most populous region in Italy and one of the few without access to the sea. Landlocked as it is, however, the area is home to many beautiful lakes such as Lake Como and Lake Garda, nestled among the mountains. The Alps are in the north, extending over the border into Switzerland. To the south, the hills descend into the valley of the Po River and its tributaries -- a rich, flat agricultural zone that includes Lombard­y's wine region.

The region's capital, Milan, is one of the great cities of Europe and serves as Italy's center of fashion and finance. Surrounding it are cities and villages containing cultural riches and relics. Mantua, for example, is celebrated for its Renaissance art and architecture. And amongst the medieval churches and monasteries of Pavia is the burial site of St. Augustine [source: Brannon].

­L­ombardy is one of Europe's most productive agricultural regions, but it's normally associated with food production rather than vineyards. T­he neighboring regions of Piedmont, Emilia-Romagna and Veneto each bottle considerably more. Nevertheless, some superb Italian wines are made here.

The Lombardy wine region boasts a healthy assortment of each of these designations. Scenic wine roads and a plethora of Italy's best restaurants await the Lombardy traveler. But if you can't make it to Italy, you can still learn how to find the wine in your local stores. In this article, you'll discover the history and culture of Lombardy, the agriculture and its famous wines. Read on to learn the origins of Lombardy's wine region.

In Roman times, Milan was known as Mediolanum, which means "the middle of the plain"­ in Latin. The region where the Italian peninsula crosses into the Alps has been a central location in Europe's history for 2,000 years.

The Celts founded Milan in the seventh century B.C. Then the Romans moved in and occupied the city in the third century B.C. During this time, the area became a major outpost of the Roman Empire. Virgil, the champion of Roman poets and author of the epic "The Aeneid," was born in Lombardy. In A.D. 313, the emperor Constantine issued the famous Edict of Milan, declaring Christianity the empire's official religion. Barbarians such as the Goths invaded as the empire fell. Then the Longobards (or Lombards) entered in A.D. 568 and bequeathed upon the region its name [source: Trips2Italy].

Over the centuries, a feudal society developed in the region. In the 12th century, the Lombard League brought together several city-states in opposition to the Holy Roman Emperor [source: Trips2Italy]. Milan and the region played an important role in the Italian Renaissance -- Leonardo da Vinci painted his "Last Supper" mural for the refectory of the Santa Maria delle Grazie church in Milan. Foreigners -- French, Spanish and Austrian -- controlled the region from the 15th to the 19th centuries, until finally Giuseppe Garibaldi's campaigns led to the unification of Italy in 1861.

Next to its wine, Lombardy is famous for its incredible cathedrals, palaces and museums. The most famous of these include:

Because the area was occupied by numerous groups, the region is filled with the relics and food knowledge of many different cultures. Want to know more about grape-growing in the northern boot? Read on to learn about Lombardy's wine agriculture.

Italy has special appellations for its famous foods. Delicious Lombardy treats include fresh and cured meats (such as bologna and salami), olive oil, fruit and cheese [source: ItalianMade]. ­

­A major reason for Lombardy's lofty standard of living is that th­e region­ is simultaneously an industrial powerhouse and part of the agricultural heartland of northern Italy. It is the second-most productive region of the country, following its neighbor to the south, Emilia-Romagna. Livestock and cereal grains comprise a major share of Lombardy's agricultural output. Rice and corn are as prevalent as wheat in the fields, and risotto and polenta are as common as pasta on the plate.

Lombardy isn't one of Italy's leading wine regions in quantitative terms -- the 44 million gallons (166,558 liters) it bottles annually make it only 11th out of the nation's 20 regions [source: Reiss]. However, the conditions are more than adequate for growing vines, with the sunny Alpine climate cooled by the region's many lakes. In the northernmost part of the region, above Sondrio, lies Valtellina, which was described by Leonardo da Vinci: "A valley surrounded by tall and terrible mountains, it makes really powerful wines" [source: ItalianMade]. The description is equally true today. Vintners over the centuries have taken over the steep mountains of Valtellina, carefully annexing all available space. The vines, mostly of the Nebbiolo variety (or Chiavennasca, as it's called in Italy), grow in terraced formations, held up by stone walls [source: Cellar Tours]. Harvest time is a mountain climbing expedition -- growers have rigged cables for sending the gathered fruit down the hillsides in baskets [source: ItalianMade].

Franciacorta, in the center of Lombardy between Bergamo and Brescia, wasn't on the wine map until the 1950s, when Franco Ziliani decided to use the method that produces sparkling wines. Made with the same international grapes grown in Champagne, such as Chardonnay and Pinot Nero (neither of which was new to northern Italy), this wine becomes bubbly through late-stage fermentation in the bottle [source: Sonkin]. The success of Ziliani, and those who followed, was such that the government bestowed its highest regional appellation, the DOCG, on Franciacorta.

Want to take a taste? Read on to learn about famous wines of the Lombardy region.

Finding good wines is all about trial and error. Depending on your personal tastes, it may take a while to find the right flavor to suit your palate. It helps to try different varieties from multiple labels when you're seeking your wine niche. In order to find great Lombardy wines, you need look no farther than the appellation of origin labels. You can find supreme reds, whites and rosés under each classification.

Now that you can readily identify Lombardy's wines, buy a bottle and drink up from this famous Italian region. Ciao, bella!