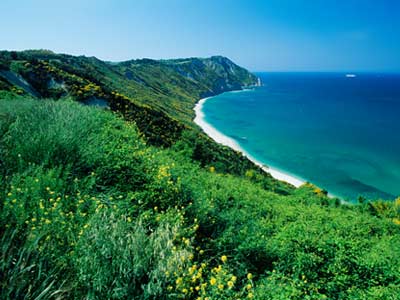 If you're looking for exquisite wines from smaller vineyards, the Marches wine region in central Italy has some exceptional offerings. See our collection of wine pictures.­
Stefano Stefani/Photodisc/Getty Images

­Italy is famous for its fashion, food and wine. And while fashion and food ­ trends may be fleeting, wine endures. Italy's artful cultivation of grapevines is deeply rooted in the country's culture and history. Italians have been producing wine for thousands of years.

Home to more distinctive local and regional native grapes than anywhere else in the world, Italy's wine industry produces one-quarter of t­he world's wine [source: Stevenson]. Vines abound. France has easily identifiable wine-growing regions, but Italy has so many cultivated vineyards and such massive wine output that it's difficult to define exact categories. The country has an array of topographies, climate variations, fertile soils and longstanding cultural traditions that affect its wine output [source: Stevenson].

­The diversity of grapes and the classification of Italian wines can make it quite a challenge for wine drinkers who try to sort the mediocre wines from the truly exceptional. If you're looking for exquisite wines from smaller vineyards, head to the Marches wine region in central Italy.

The Marches win­e region is nestled between the eastern slopes of the Apennines -- the spiny mountain range of central Italy -- and the central coast of the Adriatic Sea. The northernmost cities of the area are Pesaro (on the coast) and Carpegna; the southernmost towns are San Benedetto del Tronto and Ascoli Picena.

With the exception of the narrow coast, the landscape is hilly and mountainous, with a number of large, parallel valleys dotted with castles and medieval fortifications. The region's location along the Mediterranean draws vacationers who seek hot, dry summers and cool winters.

Read on to learn about the history and culture of the region, which have influenced wine production for centuries.

Historians have traced the history of Marches back to the Paleo­lithic era, when it was occupied by the Umbri and the Picentes, settlers from present-day Greece. The Umbri lived in the mountains, while the Picentes settled on the coast.

By the third century B.C., the Romans had taken over and colonized the area. When the Roman Empire fell at the end of the fifth century A.D., Marches was invaded by different tribes coming in from the North, like the Goths and Barbarians. The Lombards controlled the area for about two centuries until the papacy stepped in and installed Pepin the Short as emperor. His son Charlemagne was the first official Holy Roman Emperor, but after Charlemagne's death in 814 the region fell into anarchy.

Emperors and popes fought over control of the region for the next few centuries, so there was no strong central government. As a result, city states flourished and rival leaders clashed constantly. The name "marche," meaning "boundaries," came into use around the 10th century.

The papacy had regained authority by the 13th century, but there were still periods of unrest, with the country controlled by the French, Spanish and Germans at various points. In 1860, Italy was finally unified as one country.

Four rivers flow through the area and provide the lifeblood for the area's primary agricultural activities and industries such as livestock farming, fishing and manufacturing. A handful of commercial and fishing ports occupy the Marches' section of the Adriatic Sea. Ancona is the region's capital [source: Belle Marche].

To find out about the agriculture of Marches, grab a glass and move on to the next page.

Many of Marches’ dishes are cooked potaccio-style (with white wine, onion, tomato and rosemary) or porchetta-style (with wild fennel, garlic and rosemary). Lumache alle nove erbe is snails cooked with nine aromatic herbs. Brodetto di pesce is a seafood stew that’s considered a delicacy in Marches. Fried olive ascolane is a large green olive stuffed with minced meat and then fried in bread crumbs. Hungry yet? ­

­Vinicultural practices and winemaking techniques vary widely in east-central Italy. Quantities of ­ bulk-blended wine are made in the region, particularly in the high-yielding plains. In terms of quality, however, the best wines come from low-yielding, hilly areas. These vineries are more difficult to run and thus more expensive to maintain. The soil, which is characterized principally by sandstone with patches of clay and rock, is not ideal for agriculture, but the region still produces crops such as wheat and olives.

The soil is characterized principally of sandstone with patches of clay and rock. Sediment is widespread.

In all, the Marches region produces about 3 percent of Italy's wine volume, averaging about 250 million liters, or around 28 million cases, of wine annually. Of that, 27.5 million liters (3 million cases) are classified as DOCs [source: Stevenson].

If you're ready to pop and pour, move on to the next page to find out about the red and white wines of the Marches region.

The principal white wine of the region is Verdicchio, a dry white mad­e primarily from the Verdicchio grape in the Castelli di Jesi DOC zone. Smaller amounts of Malvasia and Trebbiano may be blended with Verdicchio. Bianchello del Matauro, from the north coast of Pesaro, and Bianco dei Colli Maceratesi, made south of Ancona, are other excellent whites to try [source: Wine Country].

These are the DOC-label wines from Marches:

Wines from the Offida DOC come in both red and white, and originate in the hills north of Ascoli Piceno and south of the River Aso. The newest Marches DOC, Terreni di San Severino, also comes in different varieties, including Rosso, Rosso Superiore, Rosso Passito and Moro [source: Stevenson].

Although the vini da tavola designation is typically considered of lower quality, those made by Rosso di Corinaldo and Tristo di Montesecco are highly rated [source: Stevenson]. Other non-DOC label wines to consider are Vinsanto di Sant'Angelo in Vado and Tristo di Montesecco from the Pergola area. If you're in the market for a sparkling brut, look for one that has been produced by using the champagne method.

To learn more about the wines and culture of the Marches region, visit the links on the following page.

Verdicchio, Marches’ signature white wine, used to be sold in green fish-shaped bottles. Some producers felt that this harmed the wine’s reputation, so the bottles were scrapped, and winemakers now focus on Verdicchio’s image as a world-class wine. ­