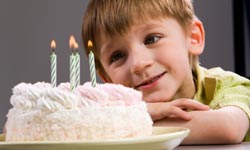 While this certainly looks amazing, we've got some extraordinary baked goods lined up for you. See more pictures of cakes and cupcakes.
iStockphoto/Thinkstock

Can you imagine baking a treat that requires an architect, a construction crew and a mechanical engineer to complete? How about a cake that requires a full-time security detail?

Such an undertaking might not appeal to the family chef, but from time to time, companies and communities come up with outrageous, supersized foods for publicity stunts or fund raisers.

Over the following pages, we'll take a look at some fun, over-the-top and extraordinary baking feats on the next pages.

In March 2010, the residents of La Cañada Flintridge, Calif., cooked up a community center fundraiser that netted $5,000 and a television episode on TLC. With 5,000 pounds of snap, crackle and pop, 7,000 pounds of marshmallows, and help from food scientist Todd Menaker and mechanical engineer Scott Stukel, community volunteers mixed up the world's largest Rice Krispies Treat.

Volunteers worked for two days in an outdoor kitchen that Stukel designed on the community center's baseball fields. They avoided a sticky mess by dumping butter and marshmallows into 2,000 vacuum-sealed bags, and then melting it in huge vats of just-under-boiling water. The goo was smooshed together inside the bags before getting oozed into boxloads of cereal and mixed with paddles. These "small" batches were hauled up platform stairs and piled into an enormous mold. 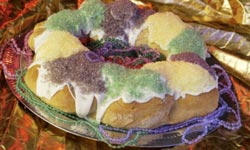 Imagine this wrapped around the New Orleans Saint's Superdome -- not once, but twice.
Jupiterimages/liquidlibrary/Thinkstock

King cakes are usually baked for Mardi Gras, but the absolute king of king cakes showed up in September 2010 to raise funds for the Susan G. Komen Breast Cancer Foundation. Fashioned to wrap twice around the New Orleans Saints' Superdome, this enormous snake of a cake measured 5,300 feet in length and is believed to weigh 8,000 pounds. The folks at family-owned and -operated Haydel's Bakery baked for three days to get the cake to size. It took six hours to assemble it around the Superdome. There was no report on how much plastic wrap was used to cover the mile-long cake.

The bad news: You know you've got too many relatives if your wedding cake needs to serve 59,000 guests. The good news: It can be done.

Executive Pastry Chef Lynn Mansel and a team of 57 pastry artisans created the World's Largest Wedding Cake for the February 2008 New England Bridal Showcase. They constructed the colossal cake by assembling 700 sheet cakes into seven tiers. Despite their delicate, lacy façade, every tier was so heavy that it rested on a steel disc. A forklift raised each tier to its heavy-duty metal pipe support, and placement of the bride and groom figurines on the top tier required the use of a bucket truck. 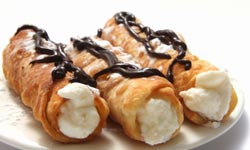 Two bakers from Newburgh, N.Y., Giulio Pistolesi and Scott Wilkinson, realized that no one had set the world record for the largest cannoli. So, the obvious choice was to set one, of course! In August 2010, they baked the cannoli to end all cannoli -- 123 pounds of fried pastry dough and delicious, creamy filling. That was 13 pounds more than the target set by the people at Guinness World Records.

Pistolesi and Wilkinson even called in a priest to witness -- and bless -- the giant event, making it a true holy cannoli.

Las Vegas celebrated its 100th anniversary in May 2005 with the world's largest birthday cake. But what happened in Vegas actually started out at a Sara Lee bakery in North Carolina.

Before the party could start, 30,000 half-sheet cakes and 40,000 pounds of frosting traveled across the U.S. in eight semitrucks. It took 1,000 volunteers 14 hours to unload, assemble and frost the convention center-sized cake.

When it was finally ready to be cut, the Las Vegas centennial birthday cake stood 20 inches tall and was the size of an NBA basketball court -- plus an extra 8 feet in length. It weighed a staggering 130,000 pounds, or about the same as two tanks used during World War II. 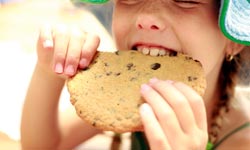 You couldn't do this with the actual Flat Rock cookie.
©iStockphoto/Michael Courtney

You've got to break a lot of eggs to bake the world's biggest cookie. Thirty thousand of them, in fact.

In 2003, Scott Blackwell of Immaculate Baking Company in Flat Rock, N.C., decided he'd do it. He started advertising the event before checking to see how big the record-holding cookie was.

After learning that an 81-foot New Zealand monster held the record, Scott partnered with engineers from a local ceramics factory. The team spent eight months creating a huge, outdoor oven that resembled the Sydney Opera House.

Scott's team mixed dough in 80-pound batches and ran it through an extruder to form square-foot blocks. Rain delayed assembly, but the team finally got all the blocks on the oven. When they unveiled it after several hours of baking, the scent rose 50 feet into the air.

For the second time in a row, gingerbread artist Roger Pelcher earned Guinness World Record recognition for building the world's largest gingerbread house. The 67-foot tall gingerbread structure was a 2006 holiday feature at the Mall of America in Bloomington, Minn. Including the metal framing, it took nine days to build. This sweet dream home beat Pelcher's previous record by 10 feet.

While Hansel and Gretel's evil witch might have felt at home in the gingerbread house, it was actually occupied by animated elves. They busily decorated larger-than-life gingerbread men cookies in the "gingerbread factory" that occupied part of the structure's 1,496 feet of confectionery living space. 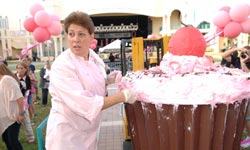 Competition has been hot for the title of World's Largest Cupcake. Ace of Cakes star Duff Goldman held the record briefly, until Guinness World Record officials realized he'd baked his entry in two parts. Then Cakes.com whipped up a little 151-pound, fudge-filled cupcake in July 2009 to grab the title. They held on for less than a month before Detroit competitor GourmetGiftBaskets.com concocted a 2 million-calorie cupcake to raise money for Susan G. Komen Cancer Foundation. It just barely made its Aug. 15, 2009, debut at a classic car show.

The cupcake was a scaled-down, hastily created second attempt for GourmetGiftBaskets.com. The original goal was a 7,000 pound cupcake, but that confection was so heavy it broke the specially built 8-foot by 8-foot oven. Even the smaller cupcake required a forklift to move it. The eventual size was 10 feet around, 4 feet high and 1,224 pounds.

But not long after that, in October 2009, another attempt by two companies in Boca Raton, Fla., resulted in the most recent record breaker: a 1,316-pound cupcake for the Think Pink Rocks breast cancer fundraiser. Who knows how big the next colossal cupcake will be?

Not all extraordinary baking sensations are sweet. Kolaches are a Czech pastry baked around fruit for breakfast, or savory fillings for lunch or dinner, and the result is kind of like a calzone. Kolaches are big in Texas. And in one town, they're large, too.

In October 2010, six bakers from Kolache Haven in Denton, Texas, devoted 100 hours to creating the world's biggest kolache. This one enclosed 83 pounds of hickory-smoked sausage blended with cheese. It took all six bakers to carry the monster kolache to its presentation at the Cumberland Presbyterian Children's Home Fall Festival. Before they carved it up and parceled it out to hungry festival-goers, it measured 20 feet, 1 inch long, and weighed 113 pounds. 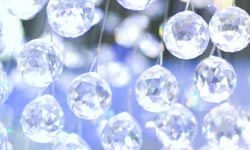 How'd you like a few of these on your cake?
Hemera/Thinkstock

Everyone looks forward to the wedding cake, the graceful confection that awaits the end of the celebration in its stately majesty. When the happy couple cuts the wedding cake and enjoys a bite, it's supposed to symbolize how they'll nurture each other in marriage.

Not these babies. They're a feast for the eyes only. And even then, only if you can get past security.

The most expensive wedding cake (so far) was a feature of a 2006 bridal show in Beverly Hills. Studded with diamonds, the cake was valued at $20 million and had its own, round-the-clock, uniformed body guards. It wasn't cut and served to guests.

Slightly less extravagant was the six-tier wedding cake commissioned by Swarovski. Fifty thousand Swarovski crystals adorned the spectacular cake, many of them in a magnificent bouquet between the third and fourth tiers. Chances are this cake wasn't eaten either. 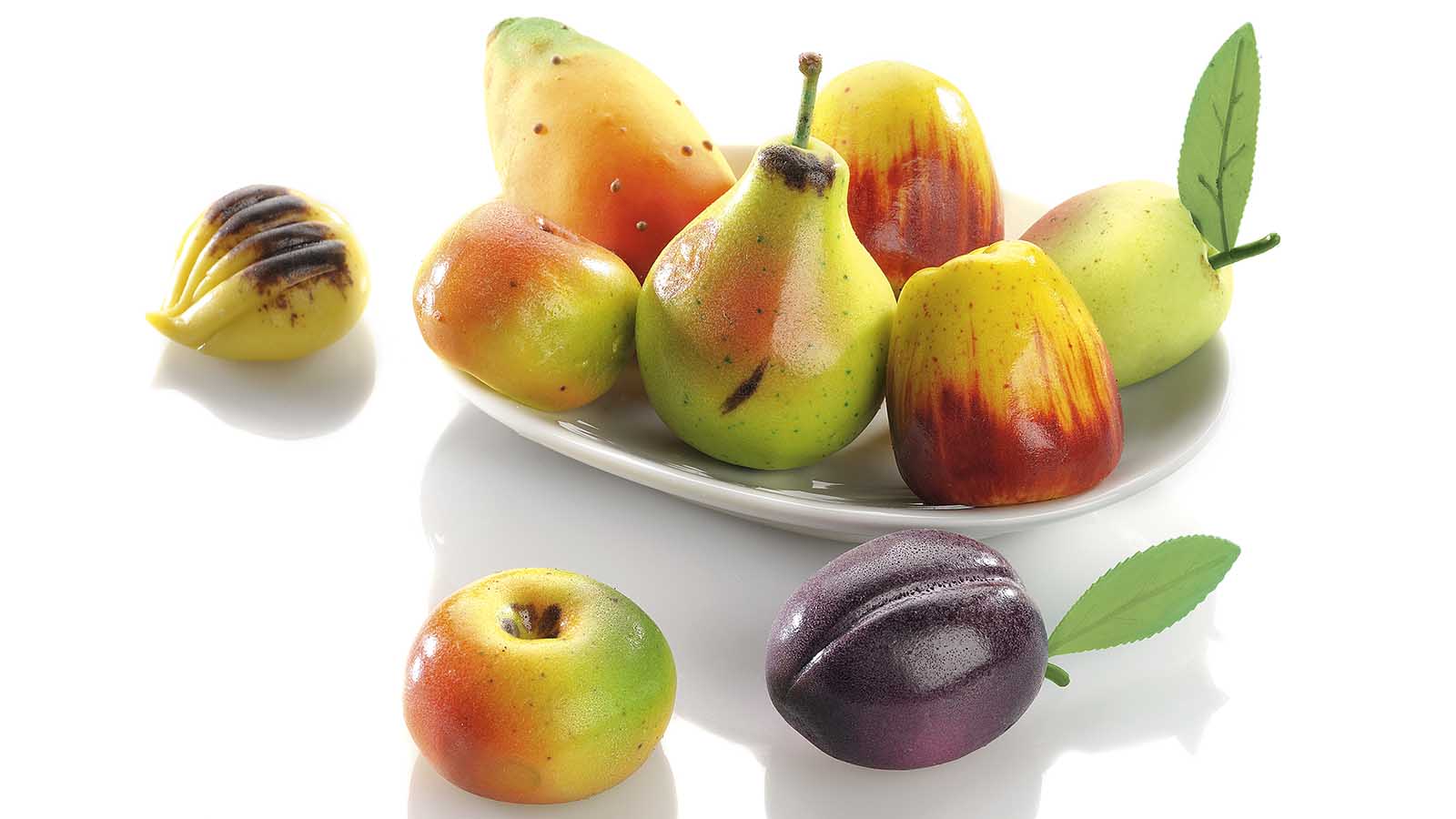 Marzipan Is the Sweet Almond Treat You Need This Holiday

Some form of marzipan can be dated back to ancient Egypt. But today this sweet confection is as traditional a holiday treat as they get.