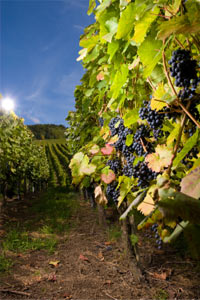 ­If you're looking for really good wine in the United States, head to California. Napa Valley is arguably the nation's premier winemaking region. Located off the Pacific Coast in north central California, Napa County's vineyards produce more fine wines, in more varieties, than anywhere else in North America does. California ha­d been cranking out delicious wine without any accolades until 1976, when a French judge recognized Napa Valley wine as better than French wine in a blind taste test [source: Gray]. Since then, California vineyards have been recognized as a force to be reckoned with.

Cooled by bay winds and a coastal fog bank, Napa Valley's topography favors winegrowing because the altitude gradually rises from the south to the north. This helps temper climatic extremes. Wooded western slopes provide afternoon shade in the valley, which benefits white grapes. Vineyards on the eastern slopes favor the production of red grapes [source: Stevenson].

­To designate that a wine comes from a particular region, worldwide wine industry labels usually include an Appellation of Origin. In the Uni­ted States, these are called American Viticultural Areas (AVAs). The name usually refers to a geographically based or climate-specific designation of a wine. Generally, this designation can be used in the United States when 75 percent of the wine comes from grapes grown in that particular area or state. In California, the wine must include 100 percent California grapes with 85 percent coming from a specific region. [source: Napa Valley Vint­ers].