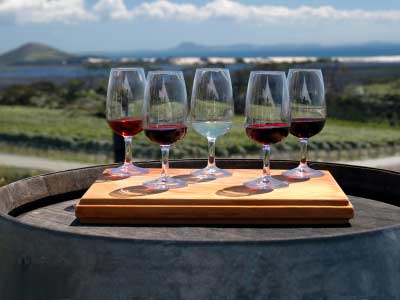 New Zealand vintners have been producing a variety of wines since the mid-19th century. See our collection of wine pictures. ­
iStockphoto/ gprentice

­In comparison to the history of many European wine-producing countries, New Zealand is pretty much a rookie. In fact, the earliest recorded wine production in New Zealand was in the mid-19th century [source: Roberts]. However, what New Zealand lacks in viticulture history, it makes up for in variety and sheer scope of area used for the production of wine.

Wine production did not take off in New Zealand quite as fast as it did in other places. The drink itself wasn't a particularly popular one in New Zealand before the country was colonized, and parts of the country had prohibition laws in act. Even without the influence of prohibition, in most cases it was more economically viable to use one's land for livestock or traditional farming [source: Roberts]. It took a while, but eventually New Zealand recognized the valuable wine cultivating conditions found on its coasts, and today it is a strong competitor in the world wine market.

­The wine regions of New Zealand differ greatly from area to area. New Zealand wineries hug the coast for nearly 1,000 miles (1,600 km) [source: New Zealand Wine]. The varying conditions within this massive area is one of the reasons such a wide variety of wine can call New Zealand home. The moderate nautical climate near the ocean is ideal for viticulture. During daytime,­ the vines benefit from powerful sunlight that is usually not filtered by haze or clouds, and at night the breeze off the sea offers just enough relief from the heat for the grapes [source: New Zealand Wine]. This climate allows the grapes to ripen on the vine longer than others do, a fact that many feel can be tasted in the unique products offered by the country.

Although the wineries in New Zealand may not be able to boast a long history, they are quickly making a name for themselves in the world of wine production. With all the different types of wine made in New Zealand, most wine lovers will find a variation of their favorite type among what the country has to offer. Moreover, since New Zealand doesn't have quite the reputation yet of other countries, the New Zealand counterpart to any European wine is usually cheaper [source: Roberts].

New Zealand is broken down in different wine regions. Check out the next page for more information.