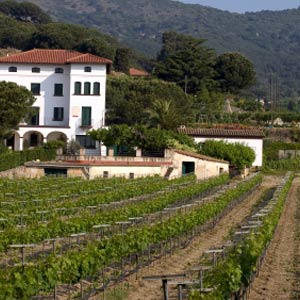 ­Spain is a beautiful land filled with history, art and culture. It's also filled with wonderful wine. The Penedés region in the Catalonian countryside west of Barcelona is second only to La Rioja in the worldwide popularity of its wines. Its primary product is Cava, or sparkling wine made in the traditi­onal method of "real Champagne" in Champagne, France. The Freixenet and Cordoníu wineries, both loc­ated in the medieval hillside town of Sant Sadurní d'Anoia, dominate Spain's market for sparkling wine. This town alone produces 90 percent of the Cava bottled in Spain [source: Amat i Solé].

Most of the winemaking enterprises in the region, however, are small family operations. Many of them oversee every aspect of the winemaking process themselves, from tending the vines to bottling. The area also produces still red and white wines of sufficient distinction to merit a Denomination of Origin (DO) from the government.

­Geographically, Penedés is divided into three zones. These different areas provide a variety of microclimates for wine growing. Along the coastline, Bajo Penedés is the lowest in altitude and warmest in temperature. Low hills divide the middle region, Medio Penedés, from the Mediterranean coast. As the most productive area of Penedés­, the middle zone accounts for the majority of wine grapes harvested, which are mostly native white wine varietals [source: CIV]. The Alt Penedés vineyards possess the region's greatest reputation for quality [source: Cellar Tours]. These vineyards are at the highest elevation of any in Europe at 2,600 feet (800 meters) [source: Spanish Fiestas].

Penedés enjoys a lively tourist trade for multiple reasons. Its landscape in the shadow of the Montserrat Mountains and mild climate represent the best of the Mediterranean. Its proximity to Barcelona, one of Europe's top destinations, makes it a convenient choice for scenic or wine-related day trips.

In this article, you'll learn the culture and history of the Penedés wine region. Then you'll discover the region's agriculture and its fine Spanish wines. Read on to learn about the history of Penedés.

Some areas in the Penedés region were home to Neolithic civilizations [so­urce: BCNinternet]. The area's viticultural history extends back at least 2,500 years to when the Phoenicians planted the first Chardonnay grapes [source: CIV]. The ancient Greeks and Romans did their share to expand wine cultivation and trading in the area. The Romans built the port of Barcelona to secure their strategic control over the Mediterranean. Because the city and the Penedés region both fell along the Via Augusta river, demand for Penedés wines spread throughout the Mediterranean region [source: Torres]. This commerce accelerated after the Roman Empire fell and held more or less steady through the Middle Ages.

The supremacy of the Catholic Church ensured a steady market, since religious orders needed vast quantities of wine for holding mass [source: DO Penedés]. Demand held so strong that even during the Moorish occupation of the peninsula, the Islamic rulers did not interfere with production [source: CIV]. The 13th century was an especially prosperous period for the region's agriculture, but the Black Death plague caused a major setback in the 14th century. The next agricultural boom for Penedés did not arrive until the 18th century, with the securing of markets in England, the Netherlands and, crucially, the Americas [source: Enoturisme Penedés].

Through the early centuries, the wines of the Penedés region were primarily red varieties. This began to change in the second half of the 19th century for two reasons. The first was the introduction of Cava to the region in 1872 [source: DO Penedés]. For a few years, while French vineyards suffered from the phylloxera bug plague, Catalonian Cava sold in huge numbers throughout Europe [source: Enoturisme Penedés]. By 1876, however, the epidemic had begun to spread across the Pyrenees into Spain, decimating the area's vines. As the region recovered, its wine production gradually shifted from red grapes to white [source: Wein-plus].

Read on for more about the Penedés wine region's agriculture.

The Wine Museum at Vilafranca del Penedés contains wine presses from the Roman era [source: DO Penedés]. By and large, though, Roman remains in Penedés are comparatively few. However, the area is rich in examples of Romanesque architecture, especially in castle fortifications from the 11th and 12th centuries [source: Enoturisme Penedés].­

Despite the eradication of a large proportion of Penedés vineyards during the phylloxera nightmare, the region's response helped ensure the renewal and long-term survival of the industry. The vintners upgraded their vine stocks by substituting high quality, plague-resistant white grape varieties for the red grapes previously used to make bulk wines. This strategic choice eventually bound the region to Cava production.

Nevertheless, the social turbulence of the early 20th century -- two world wars and Spain's civil war in between -- delayed the arrival of prosperity until the 1950s. Government oversight of the Denomination of Origin appellation, beginning in the 1960s, helped the region's agricultural economy consolidate its gains. A separate regulatory council for the area's sparkling wines arose in 1972 [source: DO Penedés]. The Cava appellation, established in 1986, is unlike Spain's other DOs in that it attaches to the winemaking process rather than the geographical indication. Nevertheless, the vast majority of Spanish Cava is produced in Penedés [source: Parode].

The area possesses nearly ideal conditions for vine cultivation. The soils are primarily limestone and clay, with some variations depending on the altitude and proximity to the sea. The climate is mild and warm, with higher temperatures in Bajo Penedés [source: CIV]. And average amounts of sunlight and rainfall are more than satisfactory [source: DO Penedés].

A large selection of wine grapes can thrive under these conditions. Black varietals, such as Garnacha, Tempranillo, Cariñena, Monastrell and Cabernet Sauvignon are grown in Bajo Penedés [source: CIV]. In Medio Penedés (the source of more than half of the region's total grape harvest) the leading varietals are Xarel-lo and Macabeo (also called Viura). These grapes are used primarily for Cava. Additionally, international vines such as Chardonnay, Cabernet Franc and Sauvignon Blanc have acclimatized to the moderate temperatures of this zone. The Parellada, a native vine and one of the principal varieties in Cava, is the leading grape in Alt Penedés. Other whites are also grown in its high altitudes, including the foreign varieties Riesling, Chenin Blanc and Gewürztraminer [source: DO Penedés].

Ready for a glass of red or white? Read on to learn about the Penedés region's famous wines.

By Any Other Name

Cava, by Spanish law, is made using the same in-bottle fermentation process as French Champagne, but because of the location of its origin, it cannot be called Champagne. When Spanish vintners began making sparkling wine in the 1870s, they called it “xampán” until the French nixed the name [source: Parode]. ­

The majority of Penedés vintners are small and family-owned. Some are literally one-man operations, making wine exclusively from their own harvests and performing each step of the process on-site. In fact, many vineyards have been in the possession of a single family for many generations [source: DO Penedés].

The two most well known names in Cava are Cordoníu and Freixenet. Cordoníu began producing wine in 1551. It is also generally accepted that Cordoníu was the first Spanish vintner to produce a quality Cava, using the champenoise method with the local grape varieties. The modern architect Josep Puig i Cadafalch, a contemporary of the more famous Antonio Gaudí, designed the Cordoníu cellars in 1915 [source: Cordoníu].

Today, more than 50 companies produce Cava in the small village of Sant Sadurní d'Anoia. The largest is Freixenet, one of the leaders of the global wine industry. They produce 200 million bottles annually. Freixenet's Cava is based on the Spanish grape varieties Xarel-lo, Macabeo and Parellada, although appellation regulators have recently approved the blending of international Chardonnay and Pinot Noir [source: Freixenet].

In still wines, one of Penedés region's leading houses is Torres. In the 1960s, Miguel Torres was among the first and most successful Spanish vintners to experiment with blending native and international varietals [source: CIV]. The family now owns estates in California, Chile and elsewhere, and exports to more than 100 countries [source: Torres].

Another famous name in the region's wines is Jean León. He was born in Spain but owned a restaurant in Hollywood (La Scala) that became a favorite celebrity watering hole in the 1950s. He later bought an estate in Penedés and planted French varietals [source: Jean León]. León's wines were served at Ronald Reagan's inauguration in 1981 [source: Urquhart].

A relative newcomer on the viticultural scene, Josep María Albet i Noya produced Spain's first organic (or, in European parlance, "ecological") wines, beginning in 1982. He produces Cava and still wines, avoiding all pesticides and chemical fertilizers. His techniques, he argues, represent a return to tradition [source: Mendel].

To learn more about Penedés and other wine-related topics, visit the links on the next page.

Cava wines can be found not only in white, but also in rose and red. Red Cava varieties are typically made from Garnacha, Monastrell, Trepat and Pinot Noir [source: Parode]. ­