Browse the article Ultimate Guide to the Piedmont Wine Region 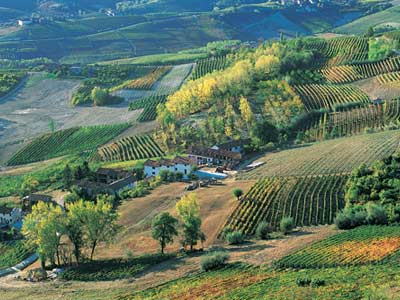 ­You love your wine, especially reds. You know all about the famous reds from Italy's big wine regions. But just as you hate shopping at generic big box stores, you hate drinking Italian wine that's mass-produced. If that sounds like you, it's time to put down your bottle and take a trip to learn about the boutique wines of the Piedmont wine region, located in the northwest corner of Italy. "Mass production" is a foreign term in this land.

­The Piedmont wine region of Italy is not just about producing spectacular boutique wines, but also about the entire gastronomic experience. This is where the Slow Food movement originated -- truly the antithesis of fast food, it focuses on preserving agriculture and local traditions. Not only is the region home to the tannin-rich Barolo and Barbaresc­o red wines, but also the famous white truffle. Red wines not your thing? You're in luck with Piedmont -- the light, sparkling sweet Moscato also finds its home here.

Celtic tribes inhabited the Piedmont wine region until the Romans took over. When the Roman Empire fell, so did Piedmont. Being on the border of Italy, it didn't have much protection from invaders and was were taken over by the French.

Phylloxera, a grape pest, invaded the Piedmont in the late 1800s, requiring the replanting of many vines. Barbera, an easy and abundantly growing vine, was the choice for many of the vineyards, paving the way for its takeover of Piedmont. Today it's the most widely planted grape in Piedmont, accounting for more than 50 percent of the region's annual DOC (Denominazione di Origine Controllata) red wine production [source: Sonkin].

Though the Piedmont wine region has many fine wines, it isn't a mass-producing wine factory. Rather, visitors get more of a boutique experience with small, family-owned vineyards. Piedmont is also home to the white truffle (and the Alba winery's annual truffle festival) -- such a gourmet delicacy must be paired with a fine wine. Catholic pilgrims are also frequent visitors to the city of Turin, which holds the Shroud of Turin.

Read on to discover the mountain-base agriculture that produces the fine red wines of the Piedmont wine region.

The Piedmont wine region is located in the northwest corner of Italy, bordering Switzerland and France. It sits at the base of the Alps, explaining its name, which means literally "foot of the mountain."

Don't expect a Mediterranean-style Italy when you're visiting this region. Piedmont grapes live through cold, snowy winters with dry, hot summers. There's also plenty of fog hanging from the mountains. In addition, vineyards are planted only on hills, another reason that Piedmont has a small, boutique-wine feel -- there simply aren't enough grapes planted for mass production.

Piedmont's people are also quick to defend their artisanal winemaking through the Slow Food movement. Slow Food's 85,000 members defend classic regional agriculture and condemn the practice of stripping land to make it commercially productive [source: Reiss]. The organization works to combat fast food and instead promote local traditions and agriculture. Slow Food, a "nonprofit, eco-gastronomic member-supported organization," is now in 132 countries -- and its forerunner, Arcigola, was founded in the Piedmont region in 1986 [source: Slow Food].

But enough of the region -- on to the wines! Read on to discover the famous wines of the Piedmont wine region of Italy.

The Piedmont wine region borders France and at one point was part of the Savoy Kingdom. So, much of its general “winemaking scene” is influenced by France - like the small vineyard plots, often planted in neat little rows of vines [source: Winebow]. ­

Reds dominate in the Piedmont wine region. There are whites, of course, but none compares to the Barolo or the Barbaresco, both DOCG red wines made from the Nebbiolo grape.

Barolo and Barbaresco are similar in that they take a longer time to age in order to restrain their bold tannins. They come from different microclimates -- Barbaresco's area is warmer and milder than the Barolo area. These wines are full-bodied, dry and dusty with high tannin. Barolo and Barbaresco wines must be aged for years to reduce the force of the tannins.

Among Piedmont's white wines, the Moscato is very popular. The Moscato grape yields a sweet white wine often used as a dessert wine. Moscato wines can also take the form of a sparkling spumante for a light-bodied treat.

Two other red grapes, the Barbera and the Dolcetto, are planted where the Nebbiolo is not. Barbera wines are medium to full-body reds, while the Dolcetto's wines are dry and light-bodied.

Though Piedmont may not be the biggest wine producer on the map, it certainly has one of the highest concentrations of quality wines. For a boutique wine treat, consider indulging in a Piedmont wine with your next slow, relaxing meal.