Browse the article Ultimate Guide to the Provence Wine Region 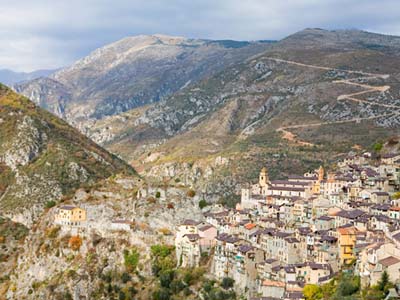 ­Visit the south of France and you'll find beautiful beaches, incredi­ble landscapes, an abundance of sunshine and wine that just keeps getting better. Provence­, which is located in the south of France, is actually France's oldest wine-producing region [source: France Tourism]. It borders the Mediterranean Sea and covers Cote d'Azur, from Aix en Provence and the Rhone valley to Nice and the Alps.

Provence isn't the largest region around. In fact, when you compare it to the 6.7 million acres (2.7 million hectares) of Languedoc-Roussillon, it seems downright tiny, boasting some 500 wineries, on only 68,000 acres (27,500 hectares). However, the incredible variety of soil types in the region helps to cultivate a number of different grape varieties.

­The region produces reds and whites, but rose has always been their piece de resistance. Out of the 140 million bottles produced annually in Provence, 75 percent of them are rose. That's 105 million bottles every year. Even more im­pressive is the fact that the rose output of the region accounts for 45 percent of France's total rose production [source: Wine Answers]. Bottom line, when people think Provence, they think rose.

Wine aficionados speak fondly of the Bandol and Bellet produced in Provence. The Mourvedre grown on the hills between La Ciotat and Toulon helps to produce one of the best reds in the region, but they only produce 5 million bottles annually under the Bandol label so it can be very hard to find. Bellet, one of the smallest appellations in France, produces some of the best French wine around and they do it on a mere 80 acres (32.4 hectares) of hillside that can only be worked by hand [source: Wine Answers]. Perhaps it's this hands-on approach that is responsible for the high quality of the wine produced.

Provence is France's oldest wine producing region. Its roots can be trace­d back 26 centuries when the Phoenicians first planted vines there. For a long time however, the region wasn't known for producing particularly good wine. It's just been in the past few decades that Provence, with a new focus on quality, has begun to produce wines that have people talking about the birthplace of French vineyards.

Romans gave the region its name when they settled there four centuries after the Phoenicians. They called it Provincia Romana, or Provence. As the Roman Empire conquered the surrounding areas and extended its borders, vines followed in the wake and wine production increased considerably. As history tells us, the empire would later fall, and with it, vines stopped developing [source: Vins de Provence].

Monastic orders resurrected wine production in Provence. From the fifth to the 12th century, they produced wine that was carefully marketed, contributing greatly to the revenue of the monasteries. Of course, it wasn't all for profit. The monks produced wine for their own consumption and religious ceremonies.

Some time in the 14th century, great noble families, and then Grand Officers of the Royal Army, began to acquire vineyards in Provence. Under their management, the groundwork was laid for present day viniculture in the region.

Five centuries later in the late 1800s, tragedy struck the vineyards of Provence. An insect, phylloxera vastatrix, had already devastated many vineyards throughout France, but Provence had remained unaffected. Then, in 1880, the insect invaded the region and wiped out almost all of the vineyards. Phylloxera vastatrix originated in the eastern United States. Therefore, the eventual solution came from grafting French plants onto American plants that were resistant to the insect. The crisis was stopped and vineyards began to rebuild. It took a huge amount of effort and financial resources to resurrect the Provence wine region [source: Vins de Provence].

In the 20th century, a cooperative movement was born. From its birth sprung the Institut National des Appellations d'Origine, or INAO. To receive a distinguished Appellation d'Origine Controlee (AOC) label, wine has to be of the utmost quality. Provence wine producers got to work and now have eight official appellations among them.

Wine Fit for a King

Caesar may have been drawn to Provence because of its incredible Mediterranean climate, but it has been noted that during his time there, he became a fan of the local wine [source: Chiff]. ­

If you've been to the south of France, then you already know about the s­unshine. If you haven't, it's hard to describe. The entire region is bathed in sunlight. It seems as if sunshine is emanating not just from that huge ball of gas in the sky, but from the ground beneath your feet as well. It comes at you from every angle. There's no escape.

The reason Provence is so sunny has a lot to do with the mistral, a dry wind that clears the sky and dries the air. There are both positives and negatives with regard to the mistral. On one hand, the wind, coming from the north, can cool grapes down from the heat and dry them after a rain. This provides protection against rot and grape diseases. On the other hand, the mistral can also damage vines that aren't securely trained or protected by hillsides [source: Absolute Astronomy].

The climate is pretty similar throughout the Provence region. However, coastal winters are mild and summers are warm, while inland areas experience much more extreme seasons.

The Provence region also has an incredible variety of soil types. There are deposits of limestone and shale near the Mediterranean coastline, while farther inland, you're more likely to find clay and sandstone. Luckily, this variety of soil combined with the climate of the region and the mistral, help to provide the area with a huge variety of grapes for winemaking.

The Les Baux-de-Provence AOC was the first French wine region to insist that all of its vineyards be farmed biodynamically. Biodynamic agriculture was first introduced by Austrian scientist Rudolf Steiner. This nonchemical agricultural movement emphasizes the health-giving forces of nature. Practitioners follow methodologies that include utilizing herbal and mineral additives in compost and following an astronomical calendar for planting and harvesting. The switch to biodynamic farming at Les Baux-de-Provence happened after most of the vineyard owners had already converted to organic farming practices, a move made necessary by the strong wind, which was spreading chemicals from the vines [source: Absolute Astronomy]. It's likely that biodynamic farming will continue to catch on throughout the rest of the region.

It's Always Sunny in Provence

Provence is known for the huge amount of rose it ­ produces. In fact, three quarters of all wine produced in the region is rose and 80 percent of that is produced in Cotes de Provence, the regions largest AOC zone.

Coteaux d'Aix-en-Provence is the second largest AOC zone in Provence. Red is the dominant wine there, a result of the strong presence of Cabernet Sauvignon and Syrah varieties of grapes. Lex Baux-de-Provence also focuses most of its attention on red wines. Domain de Trevallon, a local winery, produces a well-known Cabernet Sauvignon/Syrah under their AOC label. There are a number of famous restaurants in the area as well [source: Wine Review Online].

Coteaux Varios, like the majority of the region, is known for its rose production. The local Chateau Routas is a great place to find quality wines at a good value. Bandol, on the other hand, produces some of the most respected reds in Provence. Wine connoisseurs have taken notice of the wine made from Mourvedre grapes and complemented by Grenache and Cinsault. Bandol is also home to Provence's most renowned red wine estate, Domaine Tempier. Domain Ott, is also located there, an estate famous for its roses and whites.

White wines are the minority in Provence, but in the AOC zone of Cassis, they dominate the local wineries. Made from Clairette and Marsanne and complemented with Ugni Blanc and Sauvignon Blanc, the whites produced there are full-bodied and herbal-scented. The white wines of Bellet have also begun to get noticed. Despite its size and the fact that its vineyards, planted on hillsides, can only be worked by hand, Bellet produces some of the best wines in Provence.

Last, but not least, are the wines of Palette. Palette is Provence's smallest AOC zone. In fact, almost all of the vineyards there are owned by a single wine estate, Chateau Simone. Probably most known for its rich reds, this appellation also produces roses and whites [source: Wine Review Online].

Rose will always be the wine associated with the Provence wine region. However, if you don't try the reds produced in Bandol or the whites, cultivated by hand, from Bellet, you'd most definitely be missing out.

For more information on regional wine and related topics, visit the links on the next page.

Provence has been inhabited since prehistoric times. It’s likely that humans settled there millions of years ago. Paleolithic sites have been found along the coast dating as far back as 900,000 B.C. [source: Absolute Astronomy]. ­