Is red wine really good for you?

Browse the article Is red wine really good for you? 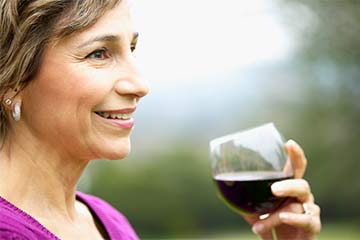 Scientists used to think that the resveratrol in red wine was good for the heart. Now, they're not so sure.
Creatas/Thinkstock

Call it the French Paradox. For years, scientists have searched for an explanation of how the French diet -- a veritable high-fat smorgasbord of cheeses and sauces -- plays a role in -- France's remarkably low incidence of heart disease. The answer to the puzzle, many believed, was in the nation's penchant for drinking red wine.

Several studies seemed to back up the idea. They found that those who drank red wine, ate dark chocolate and noshed on colorful berries had less of the inflammation that was part-and-parcel of heart disease. For example, study results published in Nature in 2006 reported that mice fed a diet rich in grape skins, berries and chocolate lived twice as long as those that didn't eat the compounds. The credit for these health benefits went to resveratrol, a common ingredient in all three items under study: wine, dark chocolate and berries [source: Baur et al.].

Now, scientists aren't so sure a glass of red wine is as good for you as they once thought, and resveratrol may not deserve the glory after all. At least that's the finding of a nine-year study that followed 783 elderly people living in two small towns in Tuscany, Italy, an area well known for its red wine production As reported in JAMA Internal Medicine, the study tracked participants daily through detailed dietary information, and urine samples were used to measure their resveratrol levels. More than 250 of the participants died, as was expected because of their age. An additional 174 got heart disease and 34 developed cancer, but resveratrol levels did not play a role in any of the participants' outcomes. They were no higher or lower in those who lived versus those who died [source: Roberts].

If resveratrol doesn't positively impact longevity, cancer rates or heart disease, does it do us any good at all? It's an important question, especially considering sales of resveratrol supplements have reached more than $30 million in the U.S. each year [source: Bland].

Drinking moderate amounts of red wine may still be good for you, just not in the way you might think. There are more than 35 other polyphenols in addition to resveratrol that require further investigation into their health benefits [source: Bland]. And drinking a bit of alcohol can help prevent bone loss in older women. A 2012 study published in the journal Menopausefound that women in their 50s and early 60s who drank one-and-one-half drinks each day can encourage the growth of new bone [source: Aubrey].

Our bodies are in the business of bone turnover, constantly dissolving bits of bone and then reforming them. As menopause begins, the dissolution of bone increases and the formation of new bone can't keep up, which leads to bone loss. For reasons scientists are still seeking to explain, a daily glass (or glass and a half) of wine slows down this turnover rate and can protect against bone breakage. Unfortunately, doubling the amount of wine doesn't increase the effect [source: Aubrey].