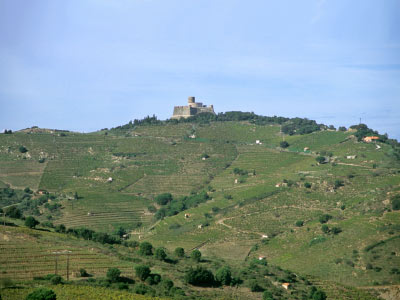 ­You know Spain, right? Dry, hot, Spanish-speaking and a big producer of red wines? You would expect Rias Baixas then, a sub-region of Spain located in its northwestern corner, to be similar. Your expectations, however, are far from reality in this small winemaking region.

Though the summers of the Rias Baixas wine region can be warm and dry, this region is very rainy -- so much so that even its water-losing rocky soil is still too moist to grow grapes and requires special planting techniques. Spanish would probably be your first guess for the region's language, but that's not it -- and no, it's not Portuguese either, which borders the region to the north. It's a bit of a trick question, as most residents of Rias Baixas speak Gallego, the language of its mother region, Galicia. If you were thinking Portuguese, you were on the right track, though. Modern-day Gallego is closely related to Portuguese and contains subtle Spanish influences [source: Rias Baixas].

­And finally, you're sure that Spain is famous for red wines. Well, as a whole you'd be correct there too. However, true to its contrarian form, Rias Baixas bucks the trend and produces mostly white wines, including a white Demoninación de Origen (DO) wine [source: Rias Baixas]. White grapes take up the vast majority of the region's plantings, and only within the last several decades has the wine of Rias Baixas become anything worth noticing.

It's a fascinating region full of differences from traditional Spain. Maybe it h­as to do with their love of bagpipes and potatoes -- something you'll learn more about in the next section. Whatever the reason, this unique region produces some great Spanish wines, so sit back, grab a glass and continue reading to learn about the Rias Baixas wine region.

If you're looking for a long and colorful history of winemaking similar to that which you might find in France or Italy, you're out of luck. Rias Baixas is practically a newborn in comparison to the many established regions of wine's most popular countries.

The Celts settled the Rias Baixas region, and their influence is still felt today. Strains of Irish culture weave through the region, notably in the Celtic origin of Rias Baixas' parent region, Galicia. The region even enjoys such traditionally Irish fare as bagpipes and potatoes. However, it's not all Irish -- remember, Rias Baixas is in Spain. [source: Rias Baixas].

Though Spain's winemaking history dates back 3,000 years, Rias Baixas can't claim that history, even though the area was settled back in the 11th century [source: Rias Baixas]. Rias Baixas may have been making wine for a while, but like many Spanish wines, they weren't popular, known or liked outside of Spain. While other Spanish wines enjoyed popularity as the spread of Phylloxera wiped out the French vineyards during the mid-1800s, winemaking still wasn't a popular pastime within the Rias Baixas region [source: MacNeil]. And it's only been within the last few decades that winemakers in Rias Baixas began looking outside the reds, experimenting with the Albarino grape, and putting an emphasis on quality [source: Sbrocco].

A whirlwind of stories surround the origins of the Rias Baixas wine region's most popular grape, the Albarino. Legend has it that the Albarino came from German monks centuries ago, and is related to the sweet white Riesling grapes. Rias Baixas natives disagree. The locals of the land say that Albarino grapes are strictly native plants, and haven't been imported from anywhere [source: Sbrocco]. ­

Just like Rias Baixas isn't your typical Spanish winemaker, this wine region doesn't have your typical Spanish agriculture, either. Rias Baixas, situated along the Atlantic coast and bordering Portugal, has a number of mountains contrasting its sandy beaches. The Rias Baixas wine region also has a number of low estuaries (or rias) that give it its name, which means "low estuaries" [source: Into Wine].

Weather in the Rias Baixas wine region is rather warm, due to the Atlantic Ocean. In addition, the summers are pretty dry, but conversely, the winters are quite wet. The Rias Baixas wine region is very green, and sometimes covered in mist as a result of the neighboring ocean, calling to mind a landscape that seems to be much more in tune with Ireland than Spain [source: Rias Baixas]. Maybe that's why the Celts chose to settle the region.

The rainy winters of Rias Baixas could do significant damage to the region's grape harvest, but growers there have found a solution. Most of the vines planted in the Rias Baixas wine region are trained high, keeping the grapes' roots from sitting in the water underground [source: Into Wine]. This tactic keeps the roots from becoming soaked, which would allow the vines to rot.

If this place of mixed cultures, attributes and landscapes has you intrigued, read on to discover what kind of famous wines the Rias Baixas region boasts.

With its mix of Spanish, Portuguese and Irish influences­, Rias Baixas is anything but typical among Spain's wine regions. Hence, Rias Baixas' wine is not typically Spanish. Furthermore, the majority of its production is white wine, not red wine.­ Among the white varieties of grapes th­at are grown in Rias Baixas, the most well known is the Albarino. Other DO white varieties include Caiño Blanco, Louriera Blanca, and Treixadura. DO red varieties of Rias Baixas include Caiño Tinto, Espadeiro, Louriera Tinta and Souson. Additional grape crops include Brancellao (red), Godello (white), Mencia (red) and Torrontes (white) [source: DO Rias Baixas].

Though a dozen different varieties of grapes are planted in the Rias Baixas wine region, Albarino is the most planted variety. This grape completely dominates the landscape, without a doubt, as it constitutes 90 percent of all the grapes planted in Rias Baixas [source: Rias Baixas]. All those other grapes put together only make up 10 percent of the region's harvest.

Wines that use 100 percent of the floral-scented Albarino grapes can be costly. Such wines are considered some of the best, not just in the Rias Baixas region but in all of Spain [source: In Spain]. Other wines of the region include Rias Baixas Condado de Tea, Rias Baixas Ribeira do Ulla, Rias Baixas Rosal and Rias Baixas Val do Salnes [source: DO Rias Baixas].

The Rias Baixas region comprises only about 7,500 acres (3,035 hectares). Reportedly, the region has more than 6,100 growers with 20,000 land plots [source: Rias Baixas]. This means that an average vineyard in the Rias Baixas wine region wouldn't even measure .5 of an acre (.2 hectares).­