Browse the article Ultimate Guide to the Savoie Wine Region 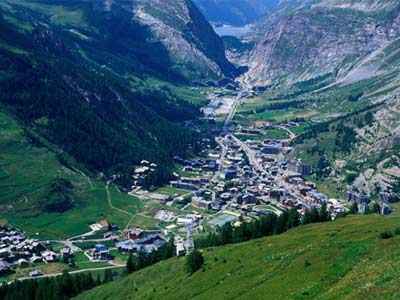 ­The setting is intoxicating: pristine alpine air, deep blue lakes and forested mount­ain ranges define the landscape of France's Savoie region. Lying on the fringes of the eastern border of France with Switzerland and Italy, its location makes it ideal for both skiing and wine.

The global community got a close-up view of the area when the 1992 Winter Olympics were held in the Savoie's renowned ski area, Albertville. Considered one of the most bea­utiful tourist destinations in France, this area of the French Alps is a winter magnet for vacationing skiers and a summer destination for outdoor enthusiasts, campers and hikers [source: French Wines].

Small villages with vineyards dot the mountain slopes. Given the French thirst for fine wines, amateurs and professionals can be sure to find local wines to soothe their palates. Designated as one of France's winegrowing regions, the Savoie wine region is located south of Geneva's Lac Leman, East of Lyon and north of Grenoble. Vineyards are found in four French regions, or departments: Savoie, Haute-Savoie, Ain and Isere [source: Stevenson].

­Unlike the looser regulations that govern Italian wine production, the French are more partic­ular about the classification system they use. Their no-nonsense oversight makes it easier for consumers to pick out wines of a particular quality, identify what (and what percentage of) grapes are in the wine, and where those grapes originated. The French even define just how bubbly sparkling wine should be.

The region consists of about 5,600 acres (2,300 hectares) of vineyards. Labels from Savoie typically have one of the following names on them: Savoie, Bugey, Crepy or Seyssel. While the Savoie and Bugey names apply to regions, Crepy and Seyssel identify the particular village where the wine was produced [source: Find the Vine].

You might wonder how this region developed its culture as well as its wine. Read on to learn about the history and culture of Savoie.

The land between the Rhone River and Lac Leman was at one time inhabited by a­ Celtic tribe known as the Allobroges. Defeated by the Ro­mans in A.D. 120, the tribe was incorporated into Gaul. The name Savoie comes from a Latin term meaning ­"country of fir trees." Once part of the Roman Empire, Savoie was absorbed into the Kingdom of the Franks in the 400s [source: Encyclopaedia Britannica].

When the Frankish Kingdom of Burgundy collapsed in 1003, the House of Savoie was born. It became the longest surviving royal house in Europe.

The House of Savoie ruled the county of Savoie until 1416, when Sigismund, the Holy Roman Emperor, made it into an independent duchy. The area included Turin and northwest Italy. Following the War of Spanish Succession, Savoie was linked with the Kingdom of Sicily, which in turn was later traded to the Kingdom of Sardinia [source: Absolute Astronomy].

For a time during the French Revolution, French forces occupied the area. But after the defeat of Napoleon in 1815, Savoie was restored to Sardinia. It wasn't until the Treaty of Turin, in 1860, that Savoie was annexed by France as part of the agreement with Napoleon III that brought about the unification of Italy.

Scattered medieval ruins and Italian architecture serve as visible reminders of the area's tumultuous past. Savoie food, on the other hand, reflects its time-honored traditions and respect for its mountain heritage.

Hearty fare like pork stew, or sausages and polenta, is a local favorite. Farcemeat is a thick sauce (or even a pudding) that's made from potatoes, bacon and dried fruit served with pork. White asparagus is a local delicacy. Its location in the Alps makes cheese as important as skiing. Fondue Savoyarde is a cheese fondue that's made with kirsh and white Savoie wine. Local cheeses include Reblochon, Tomme de Savoie and Beaufort [source: Lorch].

Move ahead to the next page to learn about how the region's hot summers and cold winters impact the cultivation of grapes and other crops in Savoie.

The name Quénard occurs with unusual regularity, especially around the village of Chignin. Wine producers there include Domaine Jean-Pierre at Jean-Francois Quénard, Andre and Michel Quénard and Raymond Quénard [source: Neal]. ­

Grape plantings in the Savoie region have been documente­d as far back as the 11th century, alt­hough some claim the Allobroges were making wine during the first century­ At its peak in 1889, more than 32,100 acres (13,000 hectares) of vines were growing in the region. Then tragedy struck when a vine louse, phylloxera, devastated the area, leaving just over a quarter of vines unscathed [source: Neal].

The climate in the region is hot in the summer and cold in the winter. The soil is composed of clay and limestone. Terraced wine fields abound on the lower slopes of the mountains, below 1,640 feet (500 meters) [source: Lorch].

The region produces more white wine than red, but both are important. White and rosé wines from the region are often described as light, dry and refreshing. Reds range from the fruity Pinot to a rich, full Mondeuse. Experts recommend choosing the most recent vintage in Savoie, as vintages are not as important in this region as they are in other wine regions of France [source: Stevenson].

To find out what notable wines to check out in the Savoie wine region, read on.

Since many of the wines produced here­ are locally consumed, few are exported in large quantities. Sparkling and semi-sparkling wines are a specialty of the Savoie region. The French categorize their sparkling wines by the amount of carbolic gas that they contain. Mousseux is French for "sparkling"; petillant is used to describe wines with a light sparkle [source: Stevenson].

Some wines of note in the region include:

You'll most likely be "forced" to enjoy Savoie region wines in Savoie, and if you get lucky, you might want to bring along a pair of skis. Á vote santé! To learn more, visit some of the links on the following page.

Sparkling wines have been produced in this part of eastern France since 1910. Two growers, Clerc and Varichon, started producing effervescent wine from the Rousette grape in Seyssel [source: Stevenson]. ­