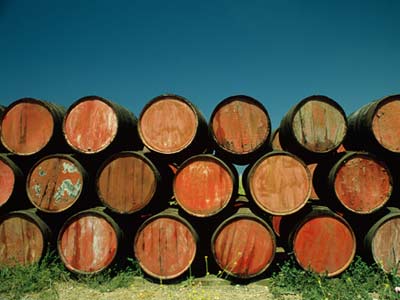 ­Is there a wine you love so much that it could lead you to your death? In the Edgar Allan Poe story "The Cask of Amontillado," that's precisely what happens to Fortunato, a self-proclaimed sommelier whose enemy lures him into a trap with the promise of a fabled wine. The wine in question is Amontillado -- a rich, complicated Sherry.

Today, no matter how much you like Amontillado, you'd be a fool to fall for the same ruse. Spain produces more than 90 million liters of Sherry each year [source: Good Cooking]. True, some of the rarer reserve Sherries are exquisitely aged -- as appropriate as a fine tawny port for the end of a good meal -- but don't follow a deceptive friend into his dungeon-like wine cellar just yet. You have other options you should understand first.

By law, any wine called Sherry may only come from the Jerez region of Spain [source: Shea]. Anything else must be called a "sherry-style" wine. Jerez, in the Cádiz­ province of Andalucia, has been producing wine for millennia -- since the time of the Phoenicians [source: Good Cooking]. Gradually, it's evolved from a straightforward red to a regional specialty, a fortified wine (one to which additional alcohol, usually brandy, has been added) with a unique fermentation process [source: Shea]. As the wine has changed, so has its name. Over the years, on the lips of Moorish invaders and then English speakers, "Jerez" (pronounced "heh-REHS" or "heh-RETH") transformed into "Sherry" [sources: Shea, Cellar Tours].

This article tours the storied region of Andalucia -- its bloody battles and its sizzling temperatures -- and the Sherries it produces. Head over to the next page so we can start at the beginning, this history of the Sherry region.

Andalucia contains Europe's oldest city, Cádiz, founded around 1100 B.C. by the Phoenecians. Subsequent colonists included the Celts and the Carthaginians before Rome took over, around 200 B.C. [source: Andalucia.com]

Under the Romans, the land was renamed Betis. Andalucia thrived as a Roman colony, exporting olive oil and wine and gaining a strong infrastructure of the straight, sound roads for which Rome is known -- along with Catholicism and the seeds of the Spanish language [source: Andalucia.com].

The collapse of the Roman Empire proved disastrous for Andalucia. The peninsula was vulnerable to attack from several directions. The Visigoths attacked from the north of Europe. And in A.D. 711, the Moors (Muslims from North Africa and the Middle East) invaded, permanently affecting Spanish language and culture [source: Andalucia.com].

The name Andalucia itself comes from the Moorish invasion. The Arabic name for the region was al-Andalus, a corruption of "Vandal" -- the Moors associated the Visigoths with the Vandal tribes. This was far from the only effect of the Moorish presence, which lasted for the next eight centuries. Mosques and mosque-inspired architecture are still visible throughout Spain, and words derived from Arabic distinguish Spanish from the other Romance languages [sources: Andalucia.com, Spanish Living].

Christian fervor seized Spain in the late Middle Ages, motivating the Reconquest, which ultimately led to the defeat of the Moors under the famed monarchs Isabella and Ferdinand. At the insistence of the notoriously cruel Inquisitor Torquemada, the same movement prompted the expulsion of tens of thousands of resident Jews [source: Telushkin].

Torquemada's purge prompted the Jewish Andalucian Luis de Torres to join the sailing expedition of a man named Christopher Columbus. Torres became the first European to settle in the Americas [source: JAHF]. As Spain colonized the New World, the port city of Seville grew rich on imports. But this meant that the Andalucian economy soured dramatically when South American nations declared independence in the 1800s [sources: Andalusia Web, Andalucia.com].

In the 1900s, civil strife returned to Andalucia. Separatists wanted to secede, even as other Spanish citizens chafed under the rule of the monarchy. In 1936, the Spanish Civil War exploded. The brutal right-wing Nationalist general Francisco Franco took over, remaining dictator for life [source: Britannica]. Since his death in 1975, living conditions in Andalucia have dramatically improved [source: Andalucia.com].

Somehow, the Sherry producers -- bodegas -- managed to keep creating their wines throughout such turbulence. Find out how on the next page.

One More Discovery for a World-Famous Explorer

In 1586, so the story goes, one of the captains in a British fleet at Cádiz made off with 3,000 butts (casks) of Sherry, thereby beginning England's long love affair with the wine. The person in charge of the expedition? Sir Francis Drake [source: Cellar Tours].­

Sherry production is concentrated in the Sherry Triangle, the region defined by the cities of Jerez, Sanlúcar and El Puerto de Santa Maria. Grapes, production methods and soils are relatively similar; temperature and climate distinguish the cities. Hot, inland Jerez produces Sherries with deep colors and full, nutty flavors. Sanlúcar, by contrast, is closer to the Atlantic and cooler, and its Sherries are pale and sharply acidic [source: Cellar Tours].

In Andalucia, the soil -- called albariza by locals -- has a great deal of limestone. It's a white, porous mix of chalk, limestone, sand and clay [source: Shea]. Because it's so porous, it can absorb and hold water well; that's important in a region as dry and sunny as Andalucia.

Sherries start with white Palomino Fino grapes. Additional varietals, if used at all, may include Muscatel and Pedro Ximénez. Grapes are left on the vines until they're slightly overripe, with a higher sugar content [source: Good Cooking]. Then they're harvested, usually near the beginning of September, and pressed almost immediately. Only then do producers divide the press into the clean, aromatic finos and manzanillas, and the heavier-bodied wines destined to become olorosos [source: Cellar Tours].

In fact, more than other wines, Sherry is defined by its aging process. Arguably, maturation has a greater effect than terroir on the final product. Most other wine matures in airtight containers, but sherry ages in the open air. It develops a surface coating of yeast, or "flor," which acts as a seal against the air [sources: Shea, Cellar Tours]. The flor grows and ebbs seasonally.

Sherry ages for at least five years. Over that time, producers use a traditional method of aging and blending called solera, which is something like a cross between a sourdough starter and a very slow champagne waterfall.

In solera aging, the casks are stacked in a vertical arrangement called a criadera (variously translated as "nursery" or "hotbed"). The solera is the bottom level of the criadera. The newest wine is always at the top. The casks are never filled all the way; the extra space allows for the development of the flor [source: Cellar Tours].

Every year, some of the bottom sherry is removed and bottled. It's replaced with sherry from the cask above. And so on and so on. Some soleras have been in continuous operation since the 19th century; fine reserve Sherries may indeed contain elements that old [sources: Shea, Cellar Tours].

On the next page, we'll take a look at the Spanish wines that result from the bloom of the flor.

Microclimates -- small areas of temperature and moisture patterns -- can vary even within the same bodega. That's one of the reasons the solera is always at ground level, where temperatures are more constant [source: Cellar Tours].­

Fino and manzanilla age beneath an active cover of flor [source: Shea]. The result is typically pale and dry, sometimes d­escribed as "razor-sharp," sometimes compared to a crisp, salty sea breeze. Traditionally served chilled, fino is often the first drink of the day in Spain [source: Cellar Tours].

Oloroso, on the other hand, never has flor. It's fortified early in the aging process, and its alcohol content is too high to allow the yeast to develop. That means it oxidizes for its entire maturation period. The product is dark and rich, often dry, sometimes salty; though it may be full-bodied, nutty, toasty and round, it's not always expansive. An older oloroso, however, lingers on the palate for a long, complicated, rewarding finish [source: Cellar Tours].

Some olorosos become what English speakers usually call "cream sherry." The wine is blended with a small quantity of sugary Pedro Ximénex. In Spain, the wine is known as oloroso dulce. "Dulce" means sweet, and a cream sherry is sweet indeed -- sometimes even syrupy [source: Cellar Tours]. Traditionally, sweet sherry is served at room temperature.

And that famous Amontillado? The name means "in the style of Montilla." It comes from a fino on which the cover of flor yeast has died. (The covers grow and die back in response to seasonal temperature change, but the flor rarely dies off entirely.) The death of the flor cover means more of the Amontillado oxidizes, which affects both the flavor and the alcohol content. To compensate for the evaporated alcohol, Amontillado receives additional fortification that brings it to 17.5 percent alcohol by volume (35 proof) [source: Cellar Tours].

Sherry's versatile flavor can accompany cheese, fruit, olives, dessert and many other foods from the beginning to the end of the meal. Try a few different varieties. Not every wine drinker likes Sherry right away, but you'll likely discover one for your palate.

It's conceivable that you could taste the same cask more than once. Old sherry casks, especially from oloroso, are prized vessels for aging single-malt scotch whisky. (Scotch is never aged in new oak, whose tannins would overwhelm the whisky.) Distillers began using sherry casks simply out of thrift; Britain imported a great deal of sherry from Spain. But soon they recognized that the sherry casks imparted depth, richness, color and body to the whisky. Britain's sherry imports have dropped, but the casks are still so important that some distillers (such as the Macallan) now construct their own casks and lease them to sherry producers before reclaiming them for whisky maturation [sources: Whisky, Oxford Wine Online].­