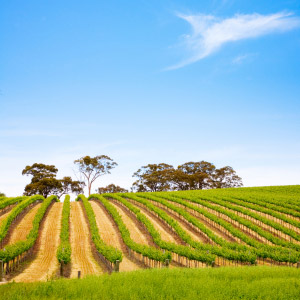 With a huge diversity of climate conditions and soil types, South Australia lends itself to the cultivation­ of a wealth of grape varieties in 17 distinct winemaking regions. See our collection of wine pictures.
iStockphoto/Linda & Colin McKie

­Within 50 years of the arrival of Europeans in Australia, South Australia had become the continent's capital of wine production. Europeans brought grape vines to the region with them, and the areas surrounding the coastal town of Adelaide proved to be suitable for their cultivation. Before long, vineyards were popping up all over the place.

­With a huge diversity of climate conditions and soil types, South Australia lends itself to the cultivation­ of a wealth of grape varieties in 17 distinct winemaking regions [source: Wine]. These varieties in turn produce a wide range of wines, from Riesling to Shiraz. The region of Barossa is considered by many to be the birthplace of Australian wine [source: Corrigan]. It produces some of the country's most renowned wine today, and it's home to some of the oldest Shiraz vineyards in the world [source: South Australian Tourism Commission].

On the next few pages, we'll explore what it takes for the South Australian region's vineyards to produce more wine than any other part of Australia. We'll start with a look at the region's history, including why its wineries survived a plague of insects that destroyed vineyards in other parts of the world.

­Some parts of the world ­ have been making wine for more than 3,000 years, and Australia is a relative newcomer to the industry. Although Aborigi­nes lived in Australia before the arrival of Europeans in 1788, wine grapes didn't -- they came with the settlers. South Australia came into the picture during the 1830s, a time when the Australian wine industry was experiencing a boom in production. Before that point, most attempts at making fine wine had failed.

Over the years, many facto­rs helped South Australia become the country's leading producer of wine. First came the gold rush in 1852. While many farmers abandoned their vines in search of gold, some wine makers in South Australia stuck with their crops.

Then came phylloxera. The insect devastated vineyards all over the world, including those in many parts of Australia. South Australia, however, avoided the epidemic, partly because of its isolated location and partly because of strict quarantine policies [source: Wine Australia]. In 1901, when trade restrictions between colonies were lifted, South Australia thrived, distributing its wine throughout the country. Production increased to satisfy demand, and by 1914 South Australia was making nearly two thirds of all the wine in Australia [source: Walsh].

Continue reading to learn of the agriculture of the region.

In a little more than 200 years, Australia has become a force in the world's wine industry. The nation sells wine to more than 100 countries, which puts them fourth on the list of the world's largest exporters of wine. So how much is that worth? It makes its mark on the economy, providing $5.5 billion in sales [source: Wine Australia]. ­

There are many reasons why South Australia is the leading producer of wine in Australia, and one of them is the fact that there are 17 smaller wine regions within its overall scope. The climate and soil type vary tremendously from region to region. This diversity makes South Australia capable of cultivating a large number of different grape varieties.

The climates range from cool and wet to hot and arid. The Barossa Valley is often characterized as having a continental climate, while Southern Fleurieu is much more likely to be described as Mediterranean. If it weren't for modern techniques in irrigation, grape cultivation in the Adelaide Plains would be next to impossible because of the heat and lack of moisture. Other regions have changes in altitude that allow wine makers to choose a climate particular to the variety of grape they wish to grow.

Soil types throughout the area are no different. However, mo­st of them involve clay and, if you dig deep enough, limestone as well. Even though the soil types differ greatly from each other, they all lend themselves to the cultivation of grape vines. In fact, the assortment of soil types is an advantage in that it allows winemakers to match varieties of grapes with their ideal soil, enhancing both the quality of the fruit and its yield.

It's because of these wide ranges in climate and soil that South Australia is able to produce more than half of all the grapes used for making wine in Australia. This comes as no surprise considering they use over 90 percent of the grapes they harvest just for that purpose [source: Atlas South Australia].

Read on to discover some of the famous wines born from this region.

When You've Got to Go, You Need to Know

Planning a trip to Australia's wine regions? The country has a creative tactic to making public restrooms available to unfamiliar tourists and citizens alike. If you've got a phone with an Internet browser, you can browse the National Public Toilet Map at any time. ­

­South Australia's diverse wine regions make it home to a number of wines worth talking about. Australian wineries with cellars are referred to as "cellar doors," and South Australia has some of wor­ldwide acclaim.

Barossa is considered to be not only the most famous wine region in Australia, but also the most important. Many claim that it put Australia on the map in terms of viticulture. The ­wine most commonly associated with the region is Shiraz, in large part because of Penfolds Grange, which is perhaps Australia's most well-known wine [source: Penfolds]. It has brought Penfolds winery and the Australian wine industry global recognition. Jacob's Creek is another winery from Barossa that produces a slew of award-winning wines, the most recognizable of which are the Classic Shiraz and the Shiraz Rose [source: Jacob's Creek].

Outside of Barossa are number of other wines worth checking out. Riesling is a wine often associated with Australia, and some of the best come from South Australia's Clare Valley and Eden Valley regions. The latter produces two that are very well known, one from Jeffery Gosset and the other from Petaluma [source: Corrigan]. If you're looking for a good Cabernet Sauvignon, you'll find some in the region of Mount Benson, but the best are said to come from Coonawarra [source: Wine Australia].

There are also a few specialty wines of South Australia that aren't as well known outside of the country. One of them is the Verdelho of Langhorne Creek, and although Australia isn't known for its Chardonnay, it has done very well coming out of Padthaway [source: Wine Australia].

The diverse range of grapes grown in South Australia means the region can offer a wine to suit every palette. For more information, visit the links on the following page.

There are more than 240 wineries in South Australia with cellars, and almost all of them are willing to show you around. Whether you're a wine novice or a wine connoisseur, you're sure to learn something about the local wines and the techniques used to make them. ­