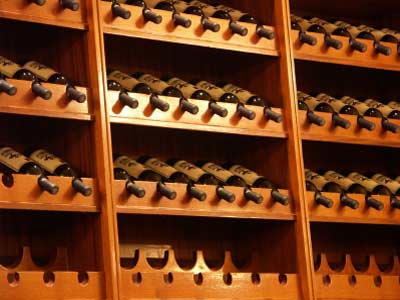 It’s not surprising to find Spanish wines stocking this restaurant wine cellar, since Spain is the third largest wine producer in the world. See our collection of wine pictures.
iStockphoto/Nuno Silva

­It might surprise you to learn that Spain is the third largest producer of wine in the world, right behind the likely leaders -- Italy­ and France. But Spain devotes nearly 3,000,000 acres of land to wine growing. That's more than anyone else does by far.

With recent modernizations in wine growing, Spain may not be third much longer. Developments in irrigation, mechanized training of vines in place of goblet pruning and new barrels made out of French oak, instead ­of old barrels made from American wood, are bringing Spanish wines new respect throughout the world [source: Best Spanish Wines].

A big part of what sets Spain apart is its native grape varieties. There are hundreds. The most common of which are Albarino, Malvasia, Verdejo and Viura, used to make white wines, as well as Monastrell, Temparnillo and Garnacha, considered to be the major reds [source: Wine Country Getaways]. The Garnacha variety was actually taken to France where it is known as Grenache. Spain also has varieties of Chardonnay, Sauvignon Blanc, Merlot, Cabernet Sauvignon, Syrah, and Pinot Noir, but they are generally used only for assemblage with local varieties.

­Just as there are a large number of native grape varieties in Spain there are also a large number of wine regions. Presently, more than 50 are D.O. registered, meaning "Denominacion de Origen" -- a labeling system regulated by the Instituto Nacional de Denominaciones. The D.O. label guarantees the origin and class of grapes, as well as the methods use­d to produce the wine. Among the D.O. registered regions of Spain, there are six key regions that produce wine. They are Rioja, Penedes, Ribera del Duero, Rueda, Jerez and Valdepenas [source: JR Net].

Despite the quality of many Spanish wines, their price tags are low compared to those of Italy and France simply because they are lesser known. As word of mouth continues to travel throughout the world and more advances are made in viniculture (the science, production and study of grapes used specifically for making wine) the popularity of Spanish wines is sure to grow.

Though there are more than 50 D.O. registered wine regions i­n Spain, only six of them are considered key regions. They are Rioja, Penedes, Ribera del Duero, Rueda, Jerez and Valdepenas. Each is distinctly different and important to the history and tradition of Spanish wine growing.

In addition to the key regions above, other notable Spanish Wine regions include:

­For more wine-related information, visit the links on the next page.

A Wine by Any Other Name

Sherry (also known as Jerez), is a fortified wine that is produced in the Jerez region of Spain. A 1996 EU directive made it illegal to name fortified wines produced in England "Sherry." Law within the EU considers Sherry a PDO (Protected Designation of Origin) product, which means only products that are actually produced within a certain region can bear the region-associated product name. This law does not apply in the United States however, and is applied as a generic term [source: Exploring Wine]. ­