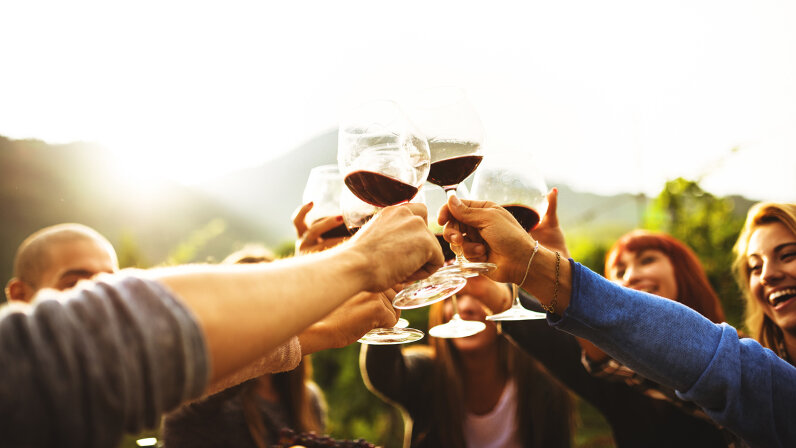 French researchers did detect cesium-137 in a limited sample of California wines, but the levels weren't high enough to pose a threat to human health. (Note: The wine pictured here is not the wine that was tested.) franckreporter/E+/Getty Images

In March 2011, an offshore earthquake triggered a tsunami that crippled the Fukushima Daiichi nuclear power plant and caused a partial meltdown of three reactor cores. The effects of the nuclear disaster weren't limited to the immediate area and some people in California, among others, became exceedingly nervous about the prospect of radioactive compounds drifting across the Pacific.

In 2014, those radioactive contaminants were about 100 miles (160 kilometers) off the coast of Eureka, California, reported scientists from the Woods Hole Oceanographic Institution. And what they discovered seemed to be good news. The levels of cesium-134, the telltale contaminant from the Fukushima disaster, were found to be so low that they posed no threat to human health. How low exactly? Less than 2 becquerels per cubic meter. The scientists put that in perspective writing, "This Fukushima-derived cesium is far below where one might expect any measurable risk to human health or marine life, according to international health agencies. And it is more than 1,000 times lower than acceptable limits in drinking water set by U.S. EPA."

Fast-forward a few years, when curious French scientists decided to test a modest sample of 18 bottles of California cabernet sauvignon and rosé to see if they'd been affected by the Fukushima disaster, as had happened with Chernobyl and European wines. They had. The scientists reported a tiny but measurable increase in the level of radioactive cesium-137 just after the Japanese nuclear accident.

But the finding was more of a curiosity than anything else. As The New York Times noted, the levels of radioactivity were so low that in order to detect them, the scientists had to use a special method, in which they burned the wine to create ashes. (Usually wine experts can perform the test without opening the bottle, which is a big relief to oenophiles.)

Again, perspective on the finding is important. "For reference, the natural radiation from a banana is about 1,000 times higher than the cesium-137 that they report in these wines. So, while it is curious that the Fukushima incident could be detected in California, the interesting point is that they could see it at all!" notes the Department of Viticulture and Enology at the University of California, Davis on a related July 25 Facebook post.

Now That's Interesting
Fascinated by Fukushima? According to Reuters, tour groups of sightseers have been visiting the region where the crippled nuclear plant is located and observing the still-continuing plant cleanup from a distance.