Browse the article Ultimate Guide to the Umbria Wine Region 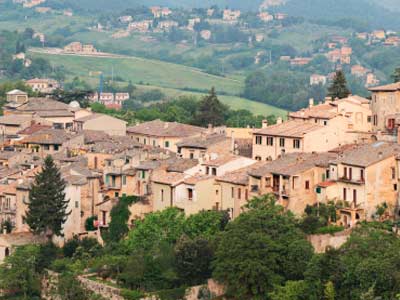 Umbria is one of the smallest regions of Italy -- but it doesn't skimp in the wine department. See more wine pictures. ­
iStockphoto/Greg Panosian

­The region of Umbria, Italy, is known as the "green heart" of the country. On a map of Italy, you can find Umbria in the mid-calf area of its knee-high­ boot. To the northwest, Umbria borders ­Tuscany, which holds its own as a center for food, tourism and winemaking. But if you're wary of tourists and want to avoid the mainstream, just head southeast to Umbria. Sit back, relax and enjoy the sights and scents of one of Italy's smallest regions.

Umbria includes the popular town of Assisi along with towns, cities and villages such as Perugia (the capital), Orvieto, Todi, Spoleto and Norcia. Most of the cities have populations of less than 50,000 residents, giving each a small-town feel [source: UmbriaItaly].

­Italy is world-famous for its wine, and little-explored Umbria is hiding some of the country's greatest treasures. Orvieto, a semisweet white wine, has been one of the region's most popular whites, historically. However, the r­egion's Torgiano Rosso "riserva" is its best red.

Wines with these labels have been subjected to strict regulations. Umbria has multiple wines under each.

Umbria's rich history and tradition offers many site-seeing opportunities for visitors such as ancient buildings, religious artifacts and hidden-away vineyards. In this article, you'll learn about the region's history and culture, its wine agriculture, and its famous reds and whites.

To get started, find out how Umbria was put on the map of Italy, and what influenced its culture and tradition of winemaking.

Umbria is named for an ancient gro­up of peoples known as the Umbri. Along with the Etruscans, they inhabited the region and made the most of its natural resources [source: ItalianMade]. As with many regions in Italy, Umbria was conquered by the Romans in 295 B.C. After the Roman Empire collapsed, the region was no stranger to invaders. Eventually, the Longobards took control and held onto Umbria until the 16th century, when Pope Paul III brought Umbria into the fold of the Roman Catholic Church. Umbria enjoyed this status until the unification of Italy in the mid-1800s [sources: UmbriaItaly, Trips2Italy].

Two stunning cathedrals are located in the region, the Basilica di San Francesco (Assisi), and Orvieto Cathedral (Orvieto). Both were first under construction in the 1200s and honor notable people in the Roman Catholic Church: Saint Francis (who began the Franciscan order of monks) and a visiting priest who is said to have experienced a miracle [source: Italian Cooking & Living]. Catholic cultural traditions mingle with pagan history and rural pride. Events include music festivals, religious celebrations, culinary events and sports competitions. The most popular events celebrate chestnuts, chocolate, jazz, Catholic holidays and the olive oil harvest [sources: Discovering Umbria, Delicious Italy].

The culture of Umbria is well-represented by multiple museums. Located throughout the region, they hold ancient and modern treasures:

Now let's head to wine country. Read on to learn about Umbria's agriculture and wine production.

There are many legends surrounding the origins of Valentine's Day, but Umbria stakes its claim at the Saint Valentine Basilica in Terni. The story revolves around Saint Valentine's own garden, where he grew many flowers and offered them as a present to people who visited him. Apparently, two of his visitors fell in love and got married. Their love was so great that it inspired endless other couples to fall in love and tie the knot as well [source: BellaUmbria]! ­

Umbria is a land-locked agricultural haven. With its roly-poly hills and­ relatively undisturbed natural resources, the region is able to kick out amazing crops. Umbria also produces meats, cheeses, vegetables and olive oil. But the true culinary kickers are its truffles. Truffles are a type of fungi (mushrooms) that are quite exclusive and expensive, costing hundreds of dollars per pound. Umbria produces "black diamonds," the typical dark truffle, along with a unique, white variety [source: ItalianMade].

Viticulture in Umbria dates back to the time of the Etruscans, who began the great tradition in Orvieto. Orvieto, the wine, later became one of the most popular wines of the region. It's a white wine that clobbers the competition by hailing almost 80 percent of the region's DOC labels. The town's magic lies in its proximity to the Paglia and Tiger rivers [source: ItalianMade, Cellar Tours]. Lakes Trasimeno and Bolsena also provide a boost to the agricultural landscape.

One of the most famous wineries in Umbria is the Lungarotti Winery. Located near the border of Tuscany, this winery was responsible for the first DOC of the region. Lungarotti began ramping up production and quality standards in the 1960s. It honors the region's traditions with a wine museum, an olive oil museum and a foundation dedicated to the land's agricultural traditions [sources: Cellar Tours, Lungarotti].

Needless to say, Umbria provides a rich selection of reds, roses and whites. Read on to learn about many of the noteworthy wines of the region.

Stanley Ho likes his truffles -- or maybe he just likes attention. Ho is a casino owner who lives and works in Hong Kong. At an international auction in 2008, Ho shelled out $200,000 for Italy's largest white truffle, which weighed in at 2.2 lbs (1 kg). Sound like a lot of money for a fungus? Not really, considering how much truffles cost. This elite fungus is hard to come by. A bunch of white truffles the size of Ho's would run you about $5,000 [source: Reuters].­

Even though Umbria is best known for its white wines, red wine drinkers need not worry. Recently, th­e region has been adding to its reds. Many of Umbria's wines are produced from the Sangiovese variety. Among these are the acclaimed Torgiano Rosso "riserva," which is also known as Rubesco.

Taste these notable wines from the various cities and villages of the region from the DOC label:

From the DOCG label

The region boasts IGT labels as well. Be sure to look for the regional IGT wines that come out of Allerona, Bettona, Cannara, Narni and Spello [source: ItalianMade].

Now that you've explored Umbria, find a corkscrew and pop one of the region's finest bottles. To find out more about these and other wines of Umbria, check out the sites on the following page.

It's long been believed that drinking red wine can benefit your health. But how much is enough? According to the Mayo Clinic, it depends on gender and moderation. Men should drink no more than two glasses, while women should drink only one. One drink is defined as 5 ounces (148 ml) of wine [source: Mayo Clinic]. Yet, just because medical research has shown that drinking wine can be beneficial to your health, depending upon your age, weight and medical history, you should first check with your doctor before you start to indulge. ­