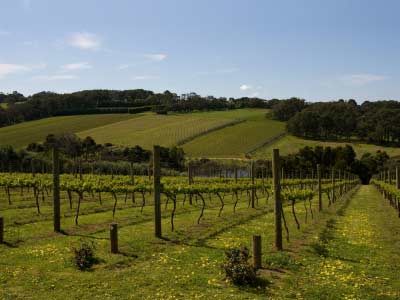 ­­­Australia was colonized ­ and settled in a similar way to the United States, though not quite as early as the U.S. A big difference you might notice between the settl­ement history of America and Australia is the quick proliferation of wine and vineyards in Australia, which didn't happen so much in the U.S. As you look into the wine history of Australia, you'll see a that Victoria was a hot spot in the past and is again home to many popular wine regions today.

Victoria is a state in Australia located in the southeastern tip, near Melbourne. Victoria includes both coastline and some inland areas, though it is one of Australia's smaller states in terms of land area. Don't underestimate Victoria's power to produce quality wines due to its size, though. Victoria boasts 21 wine regions, all stepping up to the plate with memorable wines.

­The regions that comprise Victoria make it a very productive area. You could say that Victoria has successfully diversified its assets and knows what it can produce and where. It prides itself on its wine culture, making sure to highlight its prize-winning crops with fes­tivals and tours of the Great Grape Road. One cannot deny that Victoria's history, its agriculture and its special wines combine to make this region a unique wine center [source: Visit Victoria]. This article will shed light on the regions' history, agriculture and the specific wines that come from the land down under.

Read on to discover the interesting historical and cultural points of the Victorian wine region.

Wine history in Victoria began back in the 1830s, when new settlers arrived and planted vines along the coast. An English-born settler, Edward Henty, is known for having started the spread of some vines around Victoria in 1834. Then in 1838, another settler named William Ryrie started the first vineyard to make a profit in the region. Wine production really took off after a few decades, and there were more than 160 acres (65 hectares) of viney­ards in Victoria by 1850. In 1852, the Australian version of the gold rush occurred in Eastern Australia; this discovery put a hold on wine production for a while [source: Walsh].

In keeping with the theme of gold, it might make sense to point out that many call the span from 1840 to 1870 the golden age for wine in Victoria. Wines were produced with high quality and care. The government passed acts during this period that led to an increase in settlements and, in turn, vineyards. Much of the Victorian wine produced at this time was light, crisp and sophisticated. Two things set Victoria back in prestige, though. Those setbacks were the ubiquitous phylloxera blight and a preference for heavier, darker wines among the population[source: Corrigan].

Victoria saw more troubled times in the 1920s when the price of certain grapes fell too low. Many growers couldn't compete and this caused a lot of the vineyards to fade away. After the two world wars, wine growers stepped up to their calling again. Some spots, like the King Valley wine region, were easily converted from tobacco farms to vineyards. Since then, Victoria has helped gain Australia notice for its quality wines.

Read on to learn how agriculture shaped this special region in Australia.

Solutions to Pest Problems of the Past

Though Victo­ria is a region that covers quite a small area in Australia, it is a diverse region as far as soil, climate and grape varieties are concerned. Thus, the agriculture and techniques used for viticulture are dependent on the slightly different climates and soils. The 21 distinct wine regions each offer a different study in the land and its relationship to grape vines [source: Visit Victoria].

For example, in Northwest Victoria, the region has a very temperate climate, almost like the Mediterranean. It has the Murray River to contribute to the climate, which supplies the perfect nourishment to orchards, citrus, olives trees, open pastures of grain and vineyards. Even though the Murray is there, irrigation is a must during the hot and sunny months. The soil in this area is a sandy loam with a top soil that together makes a suitable soil for vines [source: Wine Australia].

Melbourne and surrounding areas like the Yarra Valley are known for their cool climates, very different from the Northwest region we just discussed. This region has longer and drier autumns. This climate has a tendency to produce sweeter, concentrated fruit flavors.

Altitude plays a role in the growth of vines in both northeast Victoria and western Victoria. In northeast Victoria, which includes Alpine Valley, summers never get too hot and autumn seems to arrive faster than it does in most other areas. This kind of climate makes wines that are rich with complex undertones. Western Victoria is known for its sandstone soils [source: Wine Web].

Click to the next page to learn about the world-renowned wines of the Victorian wine region.

On February 7, 2009, there were several fires that spread throughout the region of Victoria, leaving decimated vines and deaths in their wake. The Yarra Valley wine region was most affected by the flames [source: Zimbio].­

The Macedon Ranges region is different than some other regions in the fact that it can count on regular snowfalls during winter. This helps make the area perfect for sparkling wines that can compete on the same level as France's sparkling varieties. The Mornington Peninsula region is best known for its Pinot Noir. Not only is this region's Pinot Noir the best in Victoria, it's also one of the best from all of Australia. Another area producing notable Pinot Noir is the Gippsland region.

Pyrenees is a region that is famous for its flavorful and spicy reds. Most of all, Pyrenees is a producer of high quality Cabernet. Grampians is also a region that produces wines with spicy undertones. This area is best known for Shiraz. Two other areas known for their Shiraz are the Bendigo and Heathcote regions. And the Beechworth region does well with Chardonnay [source: Wines of Victoria].

The Mildura Murray Darling region is known for its alternative wine varieties. The Goulburn region is famous for its production of Rhone varietals, which is a subset of French wines. And King Valley reaches across the globe, too, and does well producing high quality Italian varietals.

In the center of Melbourne, at The Atrium at Federation Square, there is a monthly meeting of winemakers from a particular wine region in Victoria. This wine showcase occurs on the first Wednesday and Thursday of every month and is an easier way to sample wines from multiple wineries in a featured region. It's also a good opportunity for attendees to talk with winemakers about their specialty wines and anything new [source: Vino Diversity].­